In conjunction with the exhibition ‘Harvest’, the Gallery’s major winter exhibition, the Australian Cinémathèque presents a free program ‘Harvest: Food on Film’. Included are some 40 features and documentaries, showcasing the production, consumption and presentation of food as a vivid motif in contemporary filmmaking across four strands: the dinner table, culture and tradition, food and power, and food ethics. The exhibition and film program will be accompanied by a stunning illustrated publication.

‘Harvest: Food on Film’ showcases contemporary filmmaking that explores food production, consumption and presentation as vivid storytelling motifs. Feature films and documentaries that take food as their subject variously touch on narratives of connection, identity and tradition, power and status, and our deepening awareness of the larger political and ethical framework that surrounds our agricultural systems and the impact of our food choices. Food on screen can speak for characters, and even become a character itself. It can convey identity, with a dish that evokes a yearning for home; transgression, through food deprivation or forbidden consumption; or power and status, in a display of excess. The recent rise of documentary films on the topic has enabled a focus on the personalities behind food creation as well as the ethical and environmental considerations of farming systems and food politics.

The dinner table serves as a small stage within a film, providing a setting in which we can focus on distinct transitional moments for the characters around it. One of the most iconic cinematic dinner tables is the site for the sumptuous meal in Gabriel Axel’s Babette’s Feast 1987. Set in nineteenth-century Denmark, Babette’s Feast tells the story of Babette, a Parisenne who fled political persecution 14 years earlier. Sheltered by kind, aging Christian sisters Martine and Filippa in a remote coastal village, she works as their cook and housekeeper. When Babette comes into some money, she proposes to make a celebratory feast — unlike any meal they’ve eaten before — for the sisters, their pious friends. Initially scandalised by such extravagance but not wanting to offend, they accept Babette’s offer.

Over the course of the meal, the diners begin to repair the damage of past frictions, renewing friendships and expressing love and care for one another. Director Gabriel Axel elevates Babette’s conscientious cooking to a masterpiece of artistic creation: the physical enjoyment of taste becomes a spiritual experience of meaningful self-expression, through the creative act of cooking as well as the kinship felt around the dinner table.

In Eat Drink Man Woman 1994, director Ang Lee follows the day-to-day experiences of a contemporary Taiwanese family. Master chef Mr Chu prepares a banquet for his daughters every Sunday, and across elaborately prepared dishes, they discuss their lives in stilted conversation. An uneasy dynamic plays out between the family members as each daughter reveals a significant change in her life: here, what begins as a site for the reinforcement of a familial tradition soon comes to represent its utter transformation.

While the dinner table is a widely recognisable site of communication, food on screen can take be expressed in a number of ways, including farming. The ability of food to communicate across cultures and express complex narratives is particularly used in documentaries on food and farming issues. Individual stories of hunger or health problems offer a way for audiences to connect to seemingly abstract political policies, such as agricultural subsidies and minimum-wage regulation.

Aaron Woolf’s documentary King Corn 2007 enhances the personal aspect of food by following two friends, Ian Cheney and Curt Ellis, as they grow an acre of corn over the course of a year. Neither has farming experience, and as they learn, the acre serves as an entry point into stories of food politics, corporate agriculture systems and the health implications of their crop. Woolf commented on the role King Corn has played as a food documentary:

King Corn was a fairly early foray into what has become a kind of sub-genre of documentary: films on food. In the United States, many of these films arose to address an urgent and ironic question: how could such a rich nation have developed such a poor diet? But there are other reasons that the food has become such a resonant theme globally as well. Food may well be one of the last ways that we can feel a connection to the land and environment in an increasingly urbanised world population.1

Rich in symbolism, when food is employed to convey power and status on screen, it can be a vehicle for transgression — excessive greed, forbidden devouring or the horror of deprivation — and is closely linked with civil order and social expectations. In his 1973 film Ashani Sanket (Distant Thunder), Indian filmmaker Satyajit Ray examines the implications of hunger on the human condition through resource control and political power during the Bengal famine of 1943. This devastating human catastrophe, caused by shortages due to weather alongside import restrictions during World War Two, also suffered from a poor administrative reaction to the problem. It is estimated that between 1 and 4 million people died of starvation. In the film, as rice becomes scarce in a rural village, social order is abandoned and people panic, turning on one another. Hunger eventually reduces everyone in the village and surrounding communities to desperation and powerlessness. Ray asserts that a nation’s government has a fundamental responsibility to its population in the regulation of food distribution, arguing that a sustainable food source is at the very heart of human dignity.

Without the distraction of smell, taste and texture, food on film allows us to reflect on this vital commodity — in feast and famine, as a status symbol, an expression of love, a healer of emotional wounds, and the founder of civilisation. These films create a space for the contemplation of more than just our tastebuds: measured by the foods we can, do, and do not choose to eat, the meals we prepare and share, the relationships we build in the process and what they mean to us as individuals, families, friends, farmers and consumers, they ask us to consider our humanity. 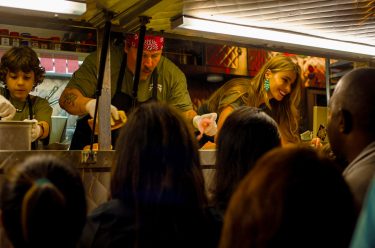