During springtime, Brisbane is awash with colour — the lavender of the jacaranda mix with an array of red and yellow flowers. Spring is also when you can see the vermilion blooms of the Butea at its peak, due to its fiery appearance, it’s given the name ‘Flame of the Forest’.

R (Richard) Godfrey Rivers (1858-1925) painted the Butea blooms in An alien in Australia in 1904 (illustrated) for the Queensland Art Society’s annual exhibition. It’s easy to imagine that Rivers felt encouraged to produce a grand study of this exotic species after the enthusiastic response to his painting Under the jacaranda 1903 (illustrated) exhibited the previous year.

The work An alien in Australia depicts the introduced ‘Flame of the Forest’ tree (Butea monosperma, formally known as Butea frondosa), the species native to tropical and sub-tropical parts of the Indian subcontinent and South-East Asia. The tree Rivers painted was planted in Brisbane’s Botanical Gardens (illustrated) by Gardens Superintendent Walter Hill (1819-1904) in the 1860s.

Brisbane Botanical Gardens at the time

As part of the classifying fervour that dominated botanical science in Europe, and to exploit the new ranges of plant material that were being discovered in the far corners of the world, in 1855 the Queensland Botanic Gardens were established at Gardens Point, and Hill became the first curator. Hill would row his boat to the wharves (illustrated) and place parcels of native Queensland plant seeds in the care of the ships’ captains, who would distribute them across the world. In reciprocation, plants from South America, including the jacaranda (Jacaranda mimosifolia); from India and South-East Asia, the ‘Flame of the Forest’ (Butea monosperma); and from Madagascar, the royal poinciana (Delonix regia), were brought to Australia on these vessels, part of the thriving exchange of botanical specimens.

Brisbane Wharves at the time

The painting An alien in Australia however was not as well received as Under the jacaranda when it was first shown in the Annual Exhibition of the Queensland Art Society in Brisbane.

Coming to the domain of landscape painting, the most striking painting in the collection is Mr Godfrey Rivers’s Under the jacaranda (No.39), a study of one of the beautiful trees of that species in the Botanic Gardens. The artist has depicted the tree in full bloom, when its luxuriant flowers seem like a lavender-tinted haze, while the ground is littered with fallen blossoms. Under this charming shade he has placed a lady and gentleman seated at a table enjoying afternoon tea. The subject is a very pretty one, and it has been very happily treated, the general scheme of colouring being exceedingly effective.1

Under the jacaranda was purchased by the Trustees of the Queensland Art Gallery almost immediately for the then substantial price of £100, and its had a presence at the Gallery ever since, one of our most-loved works.

Hoping to capitalise on this public approval, the following year Rivers exhibited another portrait of an individual tree — the Butea.

. . . if [Rivers] had been content to take the tree and a small area of the trimly kept lawn, in the midst of which [the tree] throws its graceful shade, he would have produced a picture to which little exception could be taken, but the bandstand has also been introduced . . . The structure has a crowded look, and its presence detracts from the beauty of the picture.2

R. Godfrey Rivers ‘Under the jacaranda’

Rivers took this criticism to heart, sometime after the painting was exhibited he cut the painting down and reworked sections to remove all trace of the offending bandstand. The work remained in the collection of his widow, Selina Rivers, until 1941, when she presented it to the Queensland Art Gallery as An alien in Australia (the original title An alien in Queensland).

This aspect of the painting’s history was not known when the Godfrey Rivers Trust gifted An alien in Australia to the Gallery. This was only verified in 2001 when Gallery Conservator’s examined the work using infrared reflectance and discovered remnants of a bandstand. Rivers had cropped the left edge of the painting (illustrated) leaving only a corner of the bandstand (illustrated), this has then been painted over and adjacent shrubbery reworked.3

The remaining bandstand painted over

The offending bandstand at the time

While the vibrant vermilion blooms of the ‘Flame of the Forest’ would have stood out against the dark greens of its home in the tropical forests of South-East Asia, in Australia, it was the showy lavender jacaranda that drew the most admiration. A writer strolling through Brisbane’s Botanic Gardens in 1886 passed by the butea, simply noting its red-orange blooms, before exclaiming that:

The lovely jacaranda is perhaps the finest specimen of its kind to be seen in the colony. Not so brilliant in hue as the poinciana, nor so gorgeous as the bignonia, the delicate lavender of its profusion of blooms possesses a beauty peculiarly its own. For absolute loveliness it is unsurpassed by any of the magnificent flowering trees and shrubs which have been acclimatised here. The jacaranda, when in full bloom, is to a stranger a sight worth walking many miles to see. Seen from a distance among the green tops of sister trees, it seems as though shrouded by a beautiful blue cloud, but on closer inspection this gradually forms itself into myriads of delicate lavender blossoms, while the ground below is covered with a fairy-like carpet of the same tint, formed by the falling flowers.4

The jacaranda of Rivers’s painting survived until 1979, when it was blown over in a storm. A solitary specimen of the ‘Flame of the Forest’ still blooms in the Brisbane Botanic Gardens, as it has done since it was painted by Rivers. 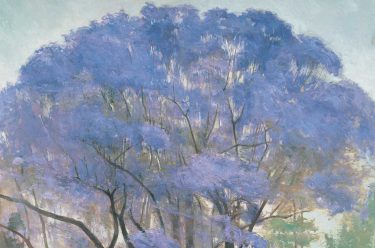