Dressed in jodhpurs, a short-sleeved shirt and riding boots, Hilda Rix Nicholas’s ‘fair musterer’ is ready for the day’s work. Her nonchalant pose is easy, confident and self-assured; it suggests that she is both an accomplished horsewoman and a capable bushworker, a woman who actively participates in the life of rural Australia.

Painted during the spring of 1935 not far from Rix Nicholas’s new and spacious studio at Knockalong in southern New South Wales, The fair musterer is one of Rix Nicholas’s largest and most important pictures. It marks the resumption of her professional career after the birth of her son in 1930. The model was Nance Edgley, her son’s first governess who worked at Knockalong during 1934 and 1935. One of the artist’s favourite views of the Tombong Range and the neighbouring property of Tombong can be seen in the distance. Exhibited in London in 1937 at the ‘Artists of the British Empire Overseas’ exhibition, The fair musterer was widely featured in the British press, where it was acclaimed as ‘one of the outstanding pictures in the exhibition’1 and ‘typically Australian in both subject and treatment’.2

Posing for the ‘The fair musterer’

Rix Nicholas rarely made preliminary drawings or studies, preferring to paint directly onto the canvas, although she did complete one rough study for The fair musterer. It was drawn quickly and decisively, the arrangement of the composition defined at the outset with only minor adjustments becoming necessary as the painting evolved. The artist also used a photograph she had taken of Nance, posed in riding gear against the Knockalong landscape, as a compositional key for the painting.

Study for ‘The fair musterer’

The cool blond tonality of The fair musterer is typical of Rix Nicholas’s style at this point in her career, as is her tendency to use different brushwork on figure and ground, a device that emphasises and sharpens the silhouette of the main group. The picture was completed in successive stages, the landscape blocked in first, while the main subject was treated more academically and received more time and attention. The landscape was the last part of the composition to be finished, the sketchiness of the brushstrokes suggesting that Rix Nicholas considered it to be a less significant part of the composition.

Rix Nicholas’s style was unusual in Australia between the wars; it was out of keeping with conventional artistic practice and challenged well-established ideas about the way rural Australia should be represented. The distinctive and unorthodox nature of her palette owed a great deal to the fashionable style of the French Salon prior to the First World War and singled out her pictures from those of her contemporaries such as Arthur Streeton and Hans Heysen, whose imagery popularly symbolised the nature of ‘Australianness’ during the 1920s and 1930s. Rix Nicholas’s pictures referred to the same kinds of ideals and values, but her livelier painting methods meant that she represented the landscape differently, and in away that was seen to be somewhat disconcerting.

More significant than her ‘French’ style, however, was the fact that she chose to paint large, public pictures about Australian rural life at a time when the genre was the exclusive domain of men. In works such as The fair musterer Rix Nicholas proposed that women had been equal partners in the formation of the imagined community of the nation, a manoeuvre which challenged the patriarchal structure of Australian cultural life.

The majority of writers and painters working in Melbourne and Sydney at the end of the nineteenth century had emphasised notions of manliness as crucial to the formation of national attitudes and values. Within this ideological framework, the role of women was rarely acknowledged — women were inevitably cast as subordinate figures who had nothing of significance to offer a nationalist aesthetic founded by men and linked to ideas about masculinity.

In the years following the First World War the bush ideal was enlarged and expanded by writers such as C E W Bean, who equated the digger’s fighting prowess with the bushman’s ‘up country’ life. When the nationalist rhetoric of the 1890s was reinterpreted in the context of the ‘Anzac’ experience, the bush acquired an even greater significance. As far as Rix Nicholas was concerned, however, a woman had as much right to paint the bush as a man. Gender barriers were irrelevant to her choice of subject matter. ‘The work is the thing that matters’, she proclaimed, not who does it’.3

Rix Nicholas wanted her pictures to valorise Australia and its unique way of life. The fact that rural Australia had become a highly significant cultural site painted by men did not deter her resolve.

In the 1930s and 1940s Rix Nicholas explored the theme of women in the bush, painting a number of pictures such as The fair musterer, which used the bush as a site for female achievement. The women avow the artists own status as a legitimate bushwoman.4 The ‘fair musterer’ can ride, muster sheep and do a man’s job, although she does not deny her womanliness. Her costume, for instance, is typical of the kind of dress worn by women working on the land at this time. It clearly denotes her gender, but also suggests that she has assumed a new kind of femininity.

The idea that women could play a part in bush life was not entirely new. It had been a feature of popular literature and theatre in Australia since before the First World War. Melodramas such as The Squatter’s Daughter gave women decisive roles to play and represented the bush as a place where women could assume and maintain managerial identities.5 The heroine of The Squatter’s Daughter often performed tasks that were not normally assigned to women. Similarly Norah Linton, the girl protagonist in Mary Grant Bruce’s Billabong books, could ride, swim, shoot and kill snakes.6 Norah had a significant part to play at Billabong and she was granted a sense of equality with the boys. Her gender, however, was never compromised. Dress and accessories always subtly denoted her difference in much the same way as they do in The fair musterer.

Mary Grant Bruce’s obituary in the Bulletin revealed how important Norah was in the imagination of several generations of Australian women: she was ‘much more than a character in the pages of a book — she was US, as we liked to fancy ourselves in supreme moments of idealism’.7

Rix Nicholas represented such a moment in The fair musterer, although her picture goes further. No longer simply characters in a story, the women of fiction have been transformed into a worthy subject for ‘high art’.

The trusty working dog — most probably an Australian Kelpie — in The fair musterer is just one of many works in the Australian Art Collection that feature animals, follow the animal trail to find them all next time you visit.

The fair musterer is on display in the Queensland Art Gallery’s Australian Art Collection, Josephine Ulrick and Win Schubert Galleries. 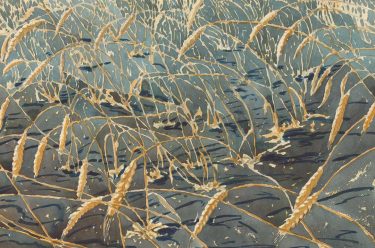