The Gallery holds 15 works from the 1991 ‘Heavy wounds’ series by Ah Xian, making it the largest public collection of his paintings. The series represents a formative moment for one of Australia’s most prominent artists, and marks an early stage in a career that would become one of the most poignant explorations of contemporary cross-cultural practice in Australian art.

For over two decades, Ah Xian’s practice has involved processes that not only engage Chinese and European artistic traditions but also challenge established techniques and presentation. His style evolved gradually: he needed a period of disconnection before he could let go of the political influence of the Cultural Revolution and begin to consider instead the vast and rich culture of China. He first expressed this in porcelain, and subsequently in a range of revered traditional materials. Ah Xian acknowledges that, when working in China, artists cannot ignore politics, yet after a certain time away he found a deep interest in his heritage, noting that ‘the artists who have left China, become very Chinese’.1

‘Heavy wounds’ was a precursor to Ah Xian’s signature style of figurative sculpture. It constitutes a juncture between key stages in his career as well as between working in Australia and China. He first visited Australia in 1989, and soon after returning to Beijing — following the Tiananmen Square massacre of 4 June 1989 — sought political asylum. These are some of Ah Xian’s earliest paintings after immigrating. They signify a time when he could respond to his personal experience of the violent events, while coming to terms with the dislocation he encountered on leaving the country in which it occurred. As scholar and curator of Chinese contemporary art Melissa Chiu has said of the series: ‘The sense of isolation and trauma in Ah Xian’s paintings is as much a reflection on China in the post- June Fourth period as it is upon the uncertainty of having just migrated to Australia’.2

Ah Xian’s career has never been restricted by the artistic conventions of the environments in which he has worked. Self-taught, he began painting nudes in the early 1980s, often set against the stark and imposing urban landscapes of his native Beijing. The depiction of the naked body was considered extreme at the time: in 1983, government officials interrogated him and confiscated some of his paintings as part of the ‘anti-spiritual pollution’ campaign.3 The busts painted in ‘Heavy wounds’ appear in numerous later sculptures, and the body has continued to be the central subject of his work, providing a platform from which to experiment with material and imagery.

The ‘Heavy wounds’ series references the socialist realist posters distributed by the Chinese Red Cross during the Cultural Revolution, which included instructions on bandaging wounds, preventing illness and disease, and dealing with trauma. A sense of irony pervades the series: Ah Xian repurposes these posters in response to the June Fourth event, employing the vernacular of the Chinese Communist Party to criticise their actions while making use of a style he had resisted when painting in China. The paintings are didactic rather than sympathetic to the wounded. Their blank expressions and plain clothing create anonymous characters, conveying the collective sentiment of socialism. The bare brick and bland architecture that appears in the backgrounds of several works bear designs that Ah Xian rendered in his earlier paintings in China, while the bandaged limbs led to further works depicting wrapped and sometimes dismembered body parts. 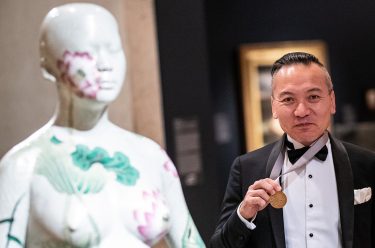 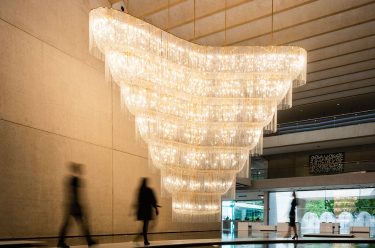