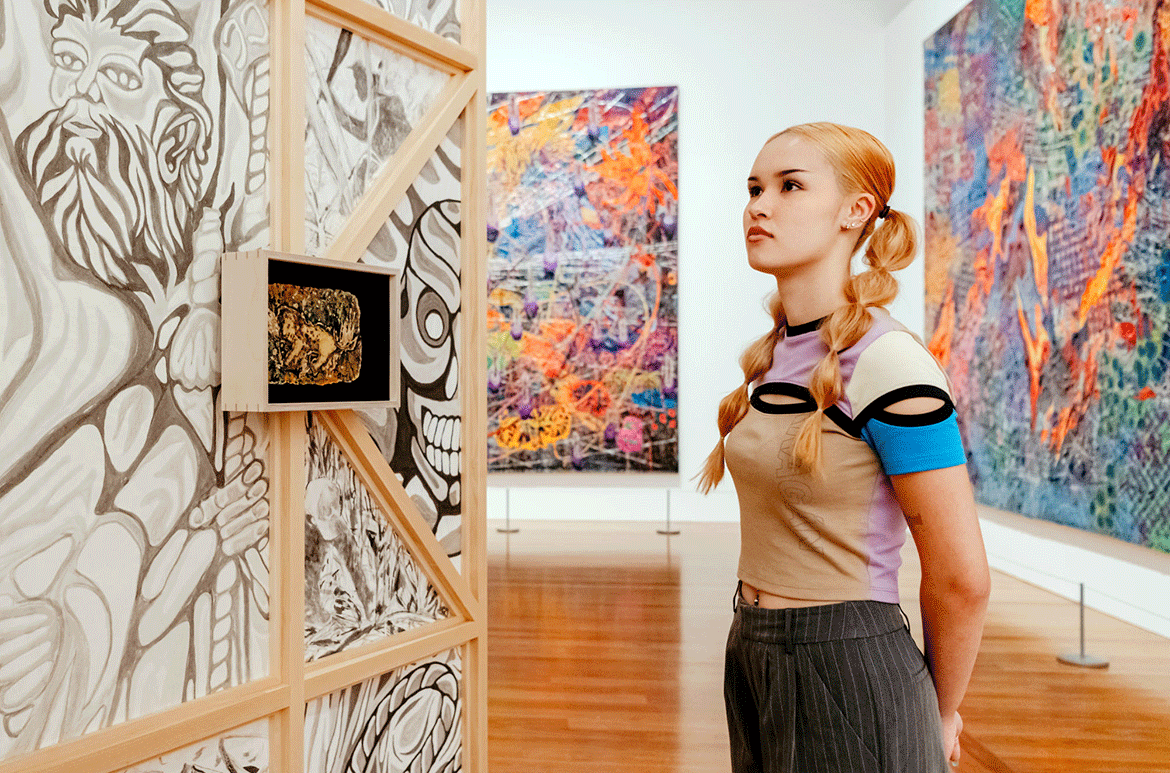 Amy Lien and Enzo Camacho have been collaborating for more than 12 years, their shared practice is oriented around intensive first-hand research into the impact of globalism, capital and development on specific small-scale communities. Since 2018, they have made a number of works based on the sugar plantations on the island of Negros in the Philippines. Established during the Spanish colonial period, the plantations reinforce an entrenched and brutal class system.

One of the best known sugar manufacturers on Negros is the Victorias Milling Company. In 1950, the company commissioned the Filipino-American modernist painter Alfonso Ossorio, the son of the company’s founder, to create a mural in a chapel servicing the workers of the sugar mill. Powerful and unsettling, yet widely loved and admired, it is popularly referred to as the Angry Christ. For Lien and Camacho, Ossorio’s mural resonates with much of the latent violence and oppression of the plantation system through its radical reworking of Catholic sentiment. Its central figure, with fiery eyes and outstretched arms, appears flayed, his clothing more like skin, muscle and sinew, his heart wrapped in thorns and flames, and a snake and skull lie at his feet.1

For ‘The 10th Asia Pacific Triennial of Contemporary Art’ (APT10), Lien and Camacho created a group of interrelated works that spin out from the mural to explore the implications of the global plantation system, and its roots in a dehumanised market economy that has given rise to many forms of contemporary violence and accelerated environmental threat. The centrepiece, The Angry Christ (Plot and Plantation) 2021, is a re-imagined folding altarpiece or retable, constructed from raw timber and inset with inked rice paper paintings showing details from Ossorio’s mural and the artists’ own photographs of workers harvesting cane by hand. The fragmented images imply a painterly metanarrative of cutting and piecing echoed in the steel blades of the knives held by the depicted workers. The retable itself, with its folding wings, implies ‘motion, mutability, transformation’ and, in the artists’ words, takes ‘the existing mural off of the wall, reactivating it by “folding it out” in different directions’.2

Construction of the folding altarpiece Operating in conjunction with the folding retable are a group of ‘handmade papers’. These works are made with sugarcane fibres from Negros, combined with a range of other materials including wax, watercolour or gouache, coconut and rice hulls, seaweed, wood ash, abaca, corn husk, banana peel, scallions and onion skins.3 In creating these works, Lien and Camacho were inspired by theorist Sylvia Wynter and her discussion of the garden plots planted by African slaves in the Caribbean as the sites of eventual ‘cultural guerilla resistance’.4 These works take up the concerns of plot and plantation by indexing the sugar ecology of Negros and suggesting alternative narratives.

While many of the symbols in their drawings are structured around references to Ossorio’s mural — the skull, snake, the flaming heart — the artists have introduced one element not employed by Ossorio. The body of a lion surrounded by a swarm of bees is taken from the Old Testament biblical narrative in which Samson finds a beehive in a lion‘s carcass, and collects some honey to eat. He created a riddle arising from this experience: ‘Out of the eater, something to eat; out of the strong, something sweet’.5 After adopting this symbol of transformation, the artists later discovered it had been appropriated as a logo in the 1880s by the British sugar-refining company Abram Lyle & Sons. This riddle within a riddle echoes the ongoing potential of Lien and Camacho’s works to generate new meanings and to delve deeper into the insurgent potential of art.

Abigail Bernal is Associate Curator, Asian Art, QAGOMA
This is an edited extract from the QAGOMA publication The 10th Asia Pacific Triennial of Contemporary Art available in-store and online from the QAGOMA Store.

Endnotes
1 Their initial research was presented as an artist lecture and mural for the NTU Center for Contemporary Art in Singapore (2019), and subsequently as a mural and group of works on paper at SOAS University of London.
2 Amy Lien and Enzo Camacho, email to the author, 18 March 2021.
3 The drawings take as their point of departure Ossorio’s series of wax-resist ‘Victorias Drawings’.
4 Sylvia Wynter, ‘Novel and history, plot and plantation’, Savacou, no.5, June 1971, pp.95–102.
5 The answer, composed like a riddle itself, is ‘What is sweeter than honey? What is stronger than a lion?’

Supported by the Australian Government through the Office for the Arts.