When the new Queensland Art Gallery opened on the South Bank of the Brisbane River in June 1982, it seemed that the hopes expressed at the Gallery’s initial opening in 1895 were at last being realized — that the beginning of the Gallery, though ‘small and humble… would be the beginning of a very fine one’.

The Queensland Government acquired several art works by gift in the 1880s and early 1890s, conditional upon their forming part of a national gallery when established. Such acquisitions included a group of seventeenth century Dutch paintings ‘of considerable value’, bequeathed by Queensland pastoralist and politician, Thomas Lodge Murray-Prior, in 1892.

Concurrently, public interest in art was increasing in Brisbane and various proposals for an art gallery were presented to the Government. In 1887, the Queensland Art Society was formed through the activities of the artists Isaac Walter Jenner, Oscar Fristrom and L. W.K. Wirth, and in 1895 a Gallery ultimately opened through the efforts of artist Godfrey Rivers, who arrived from England in 1889 and subsequently became Arts Master at the Technical College and President of the Art Society.

A supplement to the Queensland Government Gazette on Monday, 25 March 1895 announced that ‘His Excellency the Governor, with the advice of the Executive Council, has been pleased to establish a Public Art Gallery in Brisbane, to be called “The Queensland National Art Gallery”…’ On the following Friday the Gallery was opened to the public by the Governor, Sir Henry Norman, ‘in presence of a large gathering of ladies and gentlemen’.

The first premises of the Gallery comprised a large upper room of Brisbane’s then Town Hall, ‘placed at the disposal of the Trustees by the Municipal Council’. The collection initially under the control of the Trustees consisted of ‘thirty-eight pictures (many of which had been lent to the Gallery), one marble bust, and seventy engravings’. The first President of Trustees was the Chief Justice of Queensland, Sir Samuel Walker Griffith, and Godfrey Rivers acted as Secretary to the Trustees from their appointment. Rivers was also the first Curator, from 1898-1914/15.

Early gifts to the new Gallery included Jenner’s Cape Chudleigh, Coast of Labrador and Fristrom’s Duramboi, donated by the artists. The Gallery’s first purchase was a British work, Blandford Fletcher’s Evicted, in 1896, and its first Australian purchase was Josephine Muntz-Adams’s Care, in 1898. In 1899 the initial Government grant of £500 had risen to £1 000 and, by 1900, the Trustees had decided to appoint a committee in London to assist with the selection of works of art in Europe. However. by 1904-05 the annual grant had dropped to £100, which was insufficient to meet expenses, including the rent of £50.

At the same time, more adequate accommodation was being considered. In his speech at the opening of the Gallery in 1895, the Governor said he ‘hoped that it would not be long before it would be necessary to provide a more suitable building for the Gallery’. By July 1896, the Trustees reported that ‘the present location of the Gallery is… inconvenient, and we are strongly of opinion that its interest and usefulness would be much increased if a more easily accessible site were available’. These sentiments were repeated annually until the Gallery was relocated to the third floor at the newly constructed Executive Building in George Street (renamed the Lands Administration Building in 1971 and now an international hotel) and reopened on 18 December 1905.

During 1929-30 the former Exhibition Building Concert Hall, erected in 1891, was remodelled to house the Gallery which moved there in 1930, providing further room for its Collection. The Gallery reopened to the public on 11 February 1931 and was officially opened by the Governor. Sir John Goodwin, on 8 April.

Agitation continued throughout the years for fine, adequate, permanent premises befitting the State’s Art Gallery and proposals were made for various sites – without success. However, on 23 December 1968 the Trustees presented a submission to the Government on the inadequacies of the Gallery’s facilities and on this occasion positive action resulted. The present site overlooking the Brisbane River at South Brisbane was approved for purchase in April 1969.

Meanwhile, the Gallery had moved yet again to its fourth temporary premises, in the M.I.M. (Mount Isa Mines) building in Ann Street, where it reopened on 25 March 1975.

The Gallery remained in the M.I.M. Building until 1982. At the historic official opening of the new premises on 21 June 1982 the Minister for Tourism, National Parks, Sport and the Arts, the Honourable J. A. Elliott, said that he hoped the new Gallery would be a dynamic, ever-changing place that Queenslanders in the next century will come to for stimulation, spiritual replenishment and intellectual reward’. 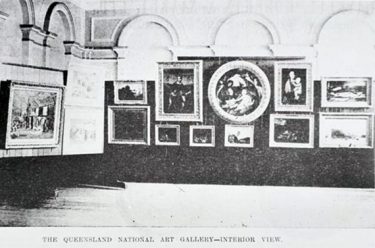