Nicknamed ‘the Crystal Ball of Pop’ Interview magazine was established in October 1969, initially to review films. In his usual evasive and ironic fashion, Andy Warhol (1928–87) gave various accounts of the reason for the birth of Interview: it was to give his younger Factory friends ‘something to do’, or to contribute to his already active social life. (Warhol once commented, “I have a social disease. I have to go out every night”.)

“We were looking for some historical artistic context, and Man Ray and Marcel Duchamp did a series called ‘Rrose Sélavy’, where Man Ray photographed Duchamp in a wig for ladies. We thought we would base it on that. We had two days of shoots, five wigs, and took 365 different pictures. We called it ‘Altered Image’ because he’s (Warhol) not wearing drag—we were simply altering his image”. Christopher Makos (Interview magazine ‘Photographer Christopher Makos Takes Us Inside Andy Warhol’s Inner Circle’, October 15, 2019)

The monthly magazine gradually morphed from an underground newsletter to a full-scale, large-format publication involving many talented photographers, editors and authors. Under Warhol’s casual direction, the magazine was pioneering in its bright, Pop-inspired format and in identifying underground cultures.

In the late 1970s, as Warhol frequented the Studio 54 nightclub along with other members of the international jet set, Interview became increasingly gossipy and sensationalist. Politicians, filmmakers, rock stars, fashion designers, literary figures and socialites — from Warhol himself to Mick Jagger, Tom Cruise, Jack Nicholson and then First Lady, Nancy Reagan — appeared on the cover or within the magazine’s pages. Many of its interviews were between celebrities, in a question-and-answer form, providing intimate and often humorous insights. A selection of Interview magazines, including the first editions are on display in the QAGOMA Research Library until 6 November 2020 to coincide with the exhibition ‘Cut It: Collage to Meme’ featuring Andy Warhol’s ‘Ladies and gentlemen’ portfolio.

‘Cut It’ contemplates our voracious consumption of images, to show how artists have redeployed the meaning of images through the enduring techniques of collage, montage and sampling. Using the lenses of news reporting and entertainment media, the artworks are cropped and altered pictures from newspapers, popular movies, the internet and art history, bringing together disparate images to express new ideas.

The Research Library is located on Level 3 of the Gallery of Modern Art (GOMA). Make an appointment to visit the Library from Tuesday to Friday, 10.00am to 5.00pm. Access to special collections is by appointment only. Contact the Library on (07) 3842 9557 or explore our online catalogue. 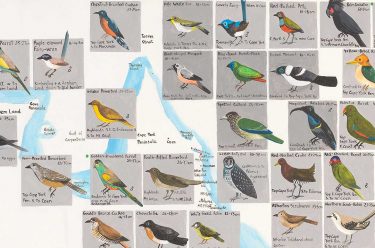