For APT8, artist Rheim Alkadhi created The Eye Theatre Closes Its Doors, and Opens Them Again 2015, a photographic performance and installation that is both political and poetic. Using images of West Asia, the work focuses on the inherent theatricality that exists within photography and raises questions about our reliance on vision as a way of perceiving the world. Ellie Buttrose posed some questions for the artist.

Ellie Buttrose | Can you tell us a bit about your approach to your art?

Rheim Alkadhi | In recent years I’ve changed geographical contexts according to projects or residencies. I respond to timeframe, available resources, and palpable local urgencies on the basis of the place itself. Continuity of ‘practice’ has not interested me; with each new project I completely reformulate my thinking alongside a relevant aesthetic and social strategy. I made The Eye Theatre specifically for APT8 — and from a great distance. I had never been to Australia. My thought was how to get there from here, and I imagined taking a pictorial route across many of the topographies I’ve intimately trodden. I began with the Mediterranean and ended in the Gulf, a place from which many migrant sailors travel by ship toward Asia. This was my initial itinerary for reaching the Asia Pacific Triennial.

Ellie Buttrose | Can you please describe the way viewers can interact with The Eye Theatre?

Rheim Alkadhi | Twenty images represent twenty split seconds in a physical sequence. The mounted prints are arranged in an upright succession on a black slotted surface. Viewers are invited to pick them up, look at them, turn them over, read the text on the verso, and in some cases, to rotate analog moving parts with their fingers. The Eye Theatre opens with a close-up of a thumb and forefinger, framing a tiny picture of the Mediterranean over an eye.

The presentation progresses along several parallels, at once metaphorically describing the mechanics of vision, from ocular nerve to striated cortex of the brain to memory/psychic imprint, and moving over various topographies of a contemporary Middle East via various the gendered bodies — Ali and Um Ali in Palestine, the girl targeted by a drone, the vehicle full of women ‘with genders wildly diverging’ — activating the thread of water and the notion that pictures cross over thresholds into our consciousness the same way that we migrationally cross through space. Ellie Buttrose | Can you discuss the significance of the different perspectives that the viewer inhabits when experiencing the work?

Rheim Alkadhi | Well, the point of view begins close up, on the reflective surface of the eye, whereon the retinas, ‘harvesters of vision’, are seen gleaning the visual field. The perspective then turns 180 degrees, directly facing the harvesters in an olive grove in Palestine. Vision takes the temporary form and route of a channel, travelling toward an interior anatomy — a complex landscape that eventually transforms into an endless rocky valley, seen from above — and suddenly embodies the eye of a military drone hovering over a fearful little girl. A crisis of conscience is conveyed, whereby the viewpoint dismounts onto a segment of the landscape for a more pressing perspective: that is, the perspectival critique of militarism, which is the work’s halfway point.

The shifting perspective you mention could be symptomatic of the kind of ‘feed’ experienced on social platforms et cetera, where we find competing perspectives in simultaneous digital parcels. I wanted to assemble a stream of synchronous events imparted in sequence and to see if it made sense as a physical presentation in real space and time. At the work’s conclusion, a mobile phone number inscribed in moist earth allows a surveillance drone to identify its user. The final purview, from the perspective of water itself, is held between thumb and forefinger and poured over the mobile number to erase it from view. This tiny sea takes us back to the very first board, offering a second chance to view the work, but more sensibly, another chance to view the world. I can say that water is the most heroic of characters in this visual proposal (which is the work itself).

Ellie Buttrose | The work points to the way that images are created and framed in the media for political ends. Can you elaborate on why your practice continues to return to this topic?

Rheim Alkadhi | Text and image labour together via unstated pact; they don’t function on their own. Elements of language operate the same way as visuals; one must present unimaginable details in an obvious or plausible way. One must either do away with distractive aspects or exaggerate the reason they are there. One must find a rhythm by which to punctuate form, data and whimsy. One must find locations and gestures that indicate a desire for justice in this lifetime.

Ellie Buttrose | The work traverses many terrains. Would you share a little about your history with some of these places?

Rheim Alkadhi | I’ve lived and worked on each of these varied terrains. I’ve related to all of them on their own terms, which also accounts, I think, for such a varied perspective. Some landscapes have been hospitable, open to an artist– stranger’s interest; others have been resistant to production. I documented these experiences and have amassed a photographic memory. One exception is Iraq and the recurring image of the overflowing Tigris River. I haven’t seen the Tigris since I was a child, so that image was appropriated from online, manipulated many times, and juxtaposed variously. It came to embody the idea of an afterimage, or of a prediction: a way of locating this manifesto of intersectionality in what has been one of the most dangerous places on earth. The rising water of the Tigris personifies resistance — it rises up in tandem with a people’s struggle for liberation, even if rising waters warn of the collapse of an epoch. I am saying that maybe water rises as a reminder, a signal of hope in our planetary negotiation.

Ellie Buttrose | Your work contains political bite delivered through poetic means. How do you negotiate the two within your practice?

Rheim Alkadhi | It’s not really a conscious negotiation. It doesn’t feel like a choice. It’s survival or sanity within a grim reality. It’s like finding real and lasting love a few weeks before the end of the world.

The Eye Theatre can be found on the level 3 Pavilion Walk, GOMA. 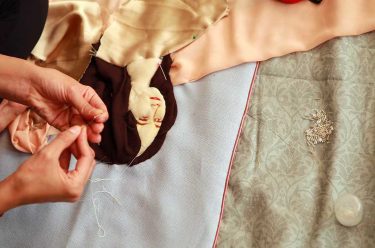