With the generous support of the Tim Fairfax Family Foundation, the Children’s Art Centre through APT8 Kids introduces children to ideas, stories, places and histories from across Australia, Asia and the Pacific.

APT8 Kids presents 12 artist projects and a publication, featuring artists from Australia, Aotearoa New Zealand, Georgia, Mongolia, New Caledonia, Vanuatu, South Korea, Vietnam, Myanmar, India, Malaysia, Kazakhstan, and Iran/ United Arab Emirates. Artists have embraced the opportunity to engage in an exchange of ideas with children, which has been central to the development and presentation of each APT8 Kids project.

Ideas of communication that extend to performance and storytelling are strong themes in APT8 Kids. In Venkat Raman Singh Shyam’s drawing activity, children learn about the intricately patterned painting style and the mythology of the Gond people — the largest tribal group in central India — as they encounter the tale of ‘The Woman and the Parrot’ and complete their own picture referencing this story. You can gain an insight into the lives of children living in Nge Lay’s home country of Myanmar as you view drawings created by children in workshops facilitated by the artist. Workshops have been held at several Queensland schools to complete an exchange between children in Australia and those in Myanmar. This project follows on from past Kids’ APTs, in which exhibiting artists have conducted workshops with children in Afghanistan, Cambodia, Vietnam, Myanmar and North Korea (DPRK) to share their experiences.

Artist and activist Richard Bell is in direct dialogue with children as he interviews students from south-east Queensland for a humorous and insightful video work, 15 Minutes, which gives young people a voice and a platform to talk about their interests and talents and to pose their own questions to the artist. Australian artist and composer Lawrence English also invites children to be heard in his work, titled Everyday Whispers. You can record a wish for yourself or your friends and family, the world or the environment, which is then played back among thousands of other wishes through a speaker system. South Korean artist Choi Jeong Hwa encourages children to activate a mass of coloured plastic lids for his work The Mandala of Flowers, in a celebration of the colourful beauty of everyday plastic objects. Situated under the artist’s APT8 work Cosmos 2014, you will be able to transform the ordinary into something spectacular.

Artist Hetain Patel invites children to share the experience of becoming a superhero. As a child of Indian heritage born and living in London, Patel enjoyed the anonymity of dressing as Spider-Man. For his APT8 Kids work, Behind the Mask, he invited children from his home town of London to dress in homemade superhero outfits and pose in their homes. The artwork gives children in Queensland an insight into the lives of children on the other side of the world and they, too, are encouraged to pose in their own superhero outfit. UuDam Tran Nguyen is interested in the change of pace in modern Vietnam, the interplay between the individual and the collective, and the way technology can be used to maintain control from a distance, particularly in war. He likes to use technology to bring people from different parts of the world together, as he did in 2013 when he created the interactive app License 2 Draw, allowing participants to access a large canvas in a studio and draw using remote control cars. For APT8 Kids, Nguyen has transformed this app into a multimedia experience, Draw 2 Connect with License 2 Draw, where digital cars can be driven across screens to create a collaborative drawing.

For Marcel Meltherorong, traditional stories are a powerful way to profile the cultural heritage of his home, Vanuatu. The art of sand drawing is an important means of sharing stories and information. Na Ghimbo — a traditional sand drawing from the island of Vao — is about the yam, an important symbol of the cycle of life. Children are able to visit a living yam garden on display as part of the Yumi Danis (We Dance) project on the Maiwar Green.

Performance, a major theme of APT8, has also emerged in the APT8 Kids projects and the publication. Angela Tiatia, a multimedia artist and curator originally from Auckland, considers the ways in which people from the Pacific have been idealised by people outside the Pacific, and the power structures that inform these representations. Her works often subtly challenge these portrayals, and in her APT8 Kids project, Looking Back, children will enter a space that will challenge their ideas of self-perception. Rosanna Raymond works across performance, spoken word and body adornment. Her work is informed by contemporary and traditional perspectives as well as her experiences as a woman of Samoan heritage. Though her APT8 Kids project Play with Your Birds, children will learn about the history and importance of the tiputa, a garment originally created in Tahiti and widely used throughout the Pacific. Tiputa are made from tapa (barkcloth) and continue to be made for use in dance and ceremony. Children can explore traditional patterns as they adorn their own tiputa with rubbings from carved surfaces in the exhibition space. Also exploring the intersection of contemporary and traditional cultures, Justin Shoulder and Bhenji Ra have drawn on ideas of ancestral mythologies and their Filipino heritage to create Club Anak (Club Child). In this immersive space, children create their own avatar, which will join with other children’s creations to populate the artists’ mythological, black-lit landscape. Yelena Vorobyeva and Victor Vorobyev live in Kazakhstan, where they explore the irony of life in a post-Soviet world through their works, which include paintings, photographs and installations. Referencing their 2002 work I Prefer Watermelons, which depicts the artists painting black stripes on green tomatoes to transform them into watermelons, their project presents children with a series of fruit-and-vegetable templates to be converted into something else, using the child’s imagination.

Our publication Draw, Make, Create: APT8 Kids profiles ten artists and artist groups, featuring specially developed activities and information about the artists and their practices. Drawing, colouring, constructing, collage and even cooking will provide insights into the artists’ own stories and interests, while also encouraging children to ponder what matters to them.

Draw, Make, Create: APT8 Kids is the ninth book to be published by the Children’s Art Centre and is now available to purchase from the Gallery Store or online for the special price of $9.95 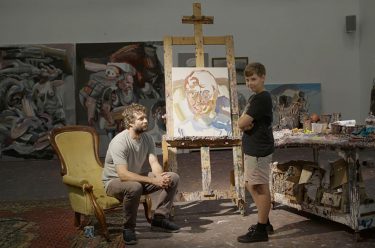