In 2014, Hamish Sawyer travelled to Malaysia and Indonesia with José Da Silva undertaking research for ‘The 8th Asia Pacific Triennial of Contemporary Art’, which opens this November. Here we continue our series on the research and development behind the Gallery’s flagship exhibition series.

Malaysia is one of the most culturally diverse countries in South-East Asia, comprising ethnic Malay, Chinese and Indian populations, as well as the Orang Asli (original peoples) and other indigenous ethnic groups located mainly in Peninsular Malaysia and the Sabah and Sarawak states. The complex interactions between these groups, together with the legacy of British colonial rule and the rapid economic development of recent decades, provide fertile ground for artists.

Malaysia’s capital city and economic hub, Kuala Lumpur, is the centre of the country’s contemporary art scene and was the base for our three-day visit. Despite being one of the most economically advanced countries in South-East Asia, opportunities for contemporary artists to exhibit their work are relatively limited. The recent closure of established commercial galleries and the proliferation of art fairs in the region mean that many Malaysian artists have more opportunities to exhibit internationally than in their home country.

One positive development is the emergence of independent spaces, such as Malaysian Artist Intention Experiment (MAIX), a notfor- profit space in the Publika Shopping Mall. Founded by APT6 artist Shooshie Sulaiman, MAIX provides a space for emerging artists to meet, exchange ideas and present their work outside of a commercial or academic context. It’s an encouraging sign for the future health of Malaysian art and essential for the development of the next generation of artists.

One of Australia’s nearest neighbours and the world’s most populous Muslim nation, Indonesia’s transition to democracy and its emergence as a regional power over the past two decades has seen an increased interest in its contemporary art scene. During our week-long visit, José and I visited the cities of Jakarta, Bandung and Yogykarta, which are the main centres of Indonesian art practice. In Jakarta, we received a tour of the Akili Museum of Art led by curator Alia Swastika. Located in a traditional Javanesestyle compound on a residential street, the Akili Museum houses a private collection that features works by many of Indonesia’s leading artists, including a stunning mural by APT5 artist Eko Nugroho.

Swastika also gave us a preview of this year’s Yogyakarta Biennale, which will feature artists from Nigeria and West Africa, as well as Indonesia. By focusing on art practices from countries situated on or near the equator, away from the traditional art centres of Europe and North America, the Yogyakarta Biennale has differentiated itself from other survey exhibitions of contemporary art, in much the same way that the APT has for over 20 years.

José and I met with a number of Indonesian artists who exhibited in APT7, including members of the Ruangrupa and Tromarama collectives and Uji Handoko Eko Saputro (aka Hahan), who have enjoyed continued success and are giving back to their local artist communities, providing opportunities for their peers to make and exhibit work, such Hahan’s Ace House Collective in Yogyakarta. The entrepreneurialism of many of these artists reflects both the challenges they face and their determination to make and exhibit contemporary art in this rapidly changing but still very traditional country. 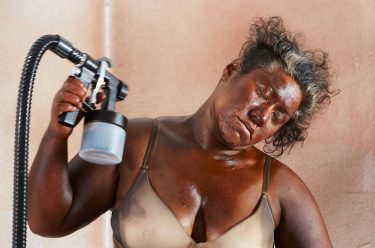