Pushpa Kumari and Pradyumna Kumar are Mithila artists. Dating from at least the fourteenth century, Mithila painting and drawing is an ancient art form traditionally practised by women in the Mithila region of Bihar in northern India and Nepal. For several centuries it was used to mark rituals and ceremonies, particularly weddings, and created mostly on the walls of homes. The Madhubani district is known for its artists, hence the form is sometimes referred to as Madhubani. The works are characterised by intricate line drawing, geometric patterns and elaborate symbolism.

Kumari is a younger generation Mithila artist who has retained the Mithila paintings’ distinctive styles and conventions while addressing new subjects such as women’s rights in India. Mithila painting has a highly developed symbolism – fish represent fertility, peacocks are associated with love, and serpents with divinity. It was closely linked with marriage and social ceremonies, with many paintings intended as instruction for newlyweds. Kumari’s works continue to draw on a strong theme of sexuality and the union between male and female. She was taught by her grandmother, the acclaimed Mithila artist Mahasundari Devi. Pradyumna Kumar is Kumari’s brother-in-law. He began painting in 2002 under her tutelage and is one of the first generation of male artists to practice this form.

Pushpa Kumari has addressed the subject of the Tsunami on a number of occasions, using the characteristic symbolism of Mithila painting to explore the theme of natural disaster on an epic scale. In this powerful image, the ravaging waters have the face of a vengeful goddess, likely to be Kali, the fierce goddess of change and destruction. This association with the goddess instils the natural event with a sense of mythological force, above the stylized waves sweeping away people, animals and objects.  The simple border intensifies the depiction of each detail, from a basket floating and still containing its fruit, to the small hands reaching out from below the water, to a woman giving birth as her companion disappears beneath an engulfing wave.

Kumari draws on the iconography of Mithila wall paintings to create her own interpretations of traditional stories and historical events, and to reflect on issues facing many women in regional communities in India. Dowry comments on the dowry system, officially illegal, but still very common in India.  Dowries can include goods, cash, property or other items that the bride’s family agrees to give to the groom and his relatives as a condition of the marriage. Tragically, dowry deaths occur as a result of this system, when young women are either murdered or driven to suicide by the harassment and torture of their in-laws in an effort to extort an increased dowry.

Barasingha – The balance of life 2014 shows two deer intertwined, with branches instead of horns on their heads. The theme of union is an important one in Mithila painting, and Pradyumna Kumar here explores the fusion between plant and animal forms, representing the interconnectedness of life and nature. Mango Tree of Life 2015 refers to a ceremony in which young men are symbolically married to a sacred mango tree.

Mithila artworks were traditionally painted only by women. As artists transferred the customary designs to paper, the art forms have changed and developed in turn. A younger generation now address political and feminist themes and public issues as well as traditional stories, and — for the first time — a group of talented male artists have begun to create works in the Mithila style. Kumar is part of this first generation of male artists. 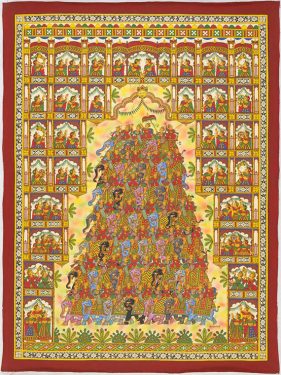