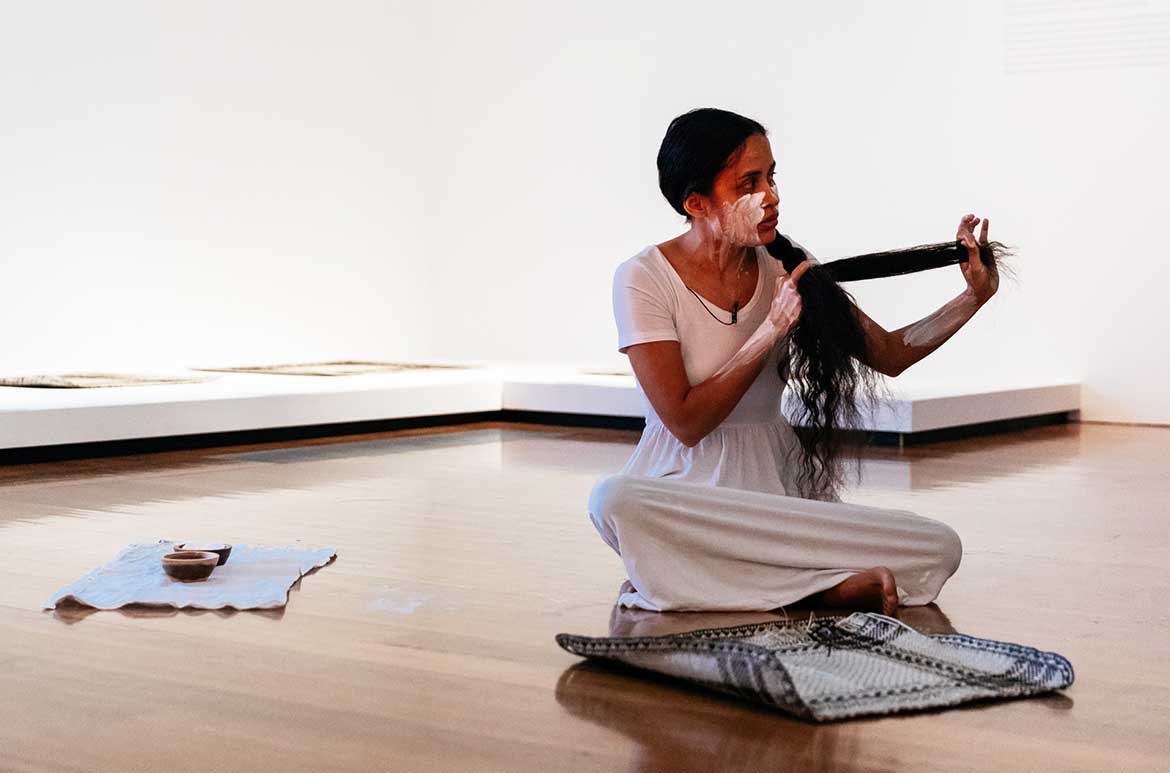 Did you know that ‘The 9th Asia Pacific Triennial of Contemporary Art’ (APT9) features a majority of female artists? We have highlighted five artists and projects and the women behind the work that makes the exhibition so rich and exciting.

How does Monira Al Qadiri close the gap between two seemingly disparate moments in the history of the Arabian Peninsula – pearling and oil. Al Qadiri’s work comments on the intersections between commerce, culture and labour.

Why does Martha Atienza use video as a tool for social change to address the issues faced by her island community, highlighting the issues women face and the roles they play within Filipino society.

What is the significance of weaving and the dynamics of a weaving hut and their relationship to the identity and status of women within matrilineal Marshallese society. Hear stories and legends that are referenced in Kathy Jetñil-Kijiner’s poetry which offer insight to the complex and evolving frames of reference used to understand and explain human experiences unique to women.

Anne Noble’s interest in collaboration and her enthusiasm for art reveals the intersection of borders with other fields such as science, and the way that art can ask different questions to science. Why does Noble bring both an emotional as well as rational perspective to her work?

How does the Women’s Wealth project celebrate the resilience of the matrilineal society where land and status are passed through the female line, where this system of governance celebrates and values women’s voices and connection to the land.

5 Women artists and projects in APT9

Through sculpture, installation and video, Monira Al Qadiri has been exploring the historic and aesthetic connections between oil and pearls, two disparate industries in the Gulf that have interconnecting histories. Both require laborious extraction and are associated with wealth and status. A major source of livelihood for the Gulf region for centuries, the pearling industry and its rich cultural traditions declined rapidly following the discovery of oil in the 1900s and the development of mass-produced pearls in Japan. Now nations such as Kuwait are preparing for a post-oil future, and Al Qadiri suggests comparisons with the historic waning of the pearling industry.

The four-sided video installation in APT9 conjures a large-scale aquarium. Onscreen, swimmers perform in a dichroic body of water with synchronised routines mimicking the repetitive movements of the pearl diver, with their actions choreographed to a contemporary remix of Kuwaiti pearling songs.

Martha Atienza uses video as a tool for social change to address the issues faced by her community on Bantayan Island in the Philippines. Her work in APT9 shows the men of her community, many of whom are fishermen or who work on large international seafaring vessels, while the men appear in the video as the actors, she also highlights the issues women face and the roles they play within Filipino society. In her broader practice, she has worked directly with the women of Bantayan island to set up hydroponic farming methods and establishing discussion groups, recorded in her video archive Para sa Aton (For Us).

Born into a family of seafarers, Atienza creates video, sound and installation works that explore the experience of being at sea and address histories of migration, labour, environmental degradation and identity. More than 400 000 Filipinos work on board some type of vessel, making them the largest group of seafaring people in the world. Atienza works to address the problems small fishing communities faces due to poverty, environmental change, and the long absence of family members at sea. Atienza’s work, while based on specifically local concerns and culture, has global significance and highlights common issues shared across the more than 7000 islands of the Philippines.

Kathy Jetñil-Kijiner is a poet, teacher and performance artist born in the Marshall Islands. Her poetry primarily focuses on cultural issues and threats faced by her Micronesian people. These include nuclear testing conducted in the Marshall Islands, militarism, the rising sea level as a result of climate change, forced migration, and economic adaptation. Jetñil-Kijiner works across artistic disciplines with her poetry, often focusing on weaving, which underpins the traditional spiritual and social structure of Marshallese life.

In her spoken-word performance created specifically for APT9, Jetñil-Kijiner uses the symbolism of the weaving process and weaving circle to explore how women’s roles and identity are shaped by Marshallese culture, the nuclear legacy, and a climate-threatened future. It draws inspiration from the Japanese dance art form of butoh to capture the metamorphic influence of the nuclear legacy on the bodies of women. The work is a weaving of words and movement, each strand connecting local wisdom with discourses of global relevance, opening the weaving circle to a new audience in APT9 – a circle defined by the open flow of learning, creativity, and a spirit of humble resilience that connects and characterises weavers of the Marshall Islands.

Kathy Jetñil-Kijiner’s dynamic performance Lorro: Of Wings and Seas detailing her own engagement with weaving as a site of cultural resistance and expression. Performed at the APT9 opening weekend.

Art from Micronesia is featured for the first time in the history of the Asia Pacific Triennial. The Marshall Islands artists are known for their finely woven dress mats, made from pandanus and bordered with intricate geometric designs. Jaki-ed is a weaving technique historically employed to make the mats, commonly worn prior to colonisation, dress mats express value and status and tell stories of ancestors, nation and community. A new apprenticeship program has contributed to a recent revival of the jaki-ed art form, and the collaborative workshop enabled the exchange of dialogue and ideas, encouraging artists to innovate and experiment with their work.

A practising photographer since the 1970s, Anne Noble creates bodies of work through what she refers to as ‘essays’ or ‘narratives’ of photographic images. Working against the usual idea of the rapid and instant snapshot, hers is an immersive act of looking, resulting in unexpected and thought-provoking work that gets inside her subject matter.

Noble has created a multi-part project for APT9, at the heart of which Conversatio: A cabinet of wonder is a functioning beehive or ‘living photograph’. Bees can be observed entering GOMA, before disappearing inside the cabinet and going about their normal activities; they are also visible when the cabinet is opened daily for 20 minutes at 11.45am, 12.45pm, 2.45pm and 3.45pm.

Women’s Wealth is a major project focusing on the closely connected matrilineal societies of Bougainville and the Solomon Islands, and the art forms made by women — from cane and pandanus weaving, to shell ornamentation and earthenware pottery.

The project explores ideas of value and the role of these art forms as a kind of wealth or currency. Women’s Wealth highlights the significance of creative spaces — such as the weaving circle — within indigenous communities and emphasises the ways in which women’s practices act as a quiet means of resilience in the face of major historical changes.

Delve deeper into APT9 and the achievements of women artists 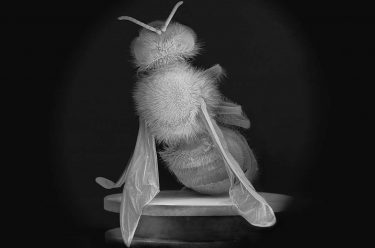