In 2018 for The 9th Asia Pacific Triennial of Contemporary Art’ (APT9), New Zealand photographer Anne Noble created a multi-part project at the heart of which is Conversatio: A cabinet of wonder 2018, a functioning beehive or ‘living photograph’. Bees can be observed entering the Gallery, before disappearing inside the cabinet and going about their normal activities; they are also visible when the cabinet is opened daily for 20 minutes at 11.45am, 12.45pm, 2.45pm and 3.45pm.

SUBSCRIBE to QAGOMA YouTube to go behind-the-scenes at events and exhibitions / Anne Noble’s Conversatio: A cabinet of wonder 2018, installed at APT9, GOMA

The origins of ‘Conversatio: A cabinet of wonder’

SUBSCRIBE to QAGOMA YouTube to go behind-the-scenes at events and exhibitions / Anne Noble’s Conversatio: A cabinet of wonder 2018, installed at APT9, GOMA

Museum: For a time when the bee no longer exists

Museum: For a time when the bee no longer exists comprises portraits of bees that recall dust-covered artefacts from another time, together with a 3-D printed insect, resembling the ghost from the portraits. In addition, the luscious Bruissement photograms from the ‘UMBRA’ series of 2015–17 are enlargements of images capturing the light around the wings of dead bees – bees that died from pesticide poisoning – as the artist held them in her hands.

Noble’s works serve as a catalyst for discussion regarding our complex relationship with the bee. An insect revered historically in myth, religion and literature, as well as in present-day science and industrial research, her project stimulates awareness of this species whose essential global existence is threatened by pests, chemicals and disease.

Read more about Anne Noble in The 9th Asia Pacific Triennial of Contemporary Art available online or in-store. The publication represents an important and lasting document of the current artistic landscape of Australia, Asia and the Pacific.

Anne Noble has been supported by Creative New Zealand. 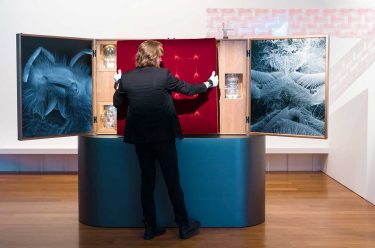