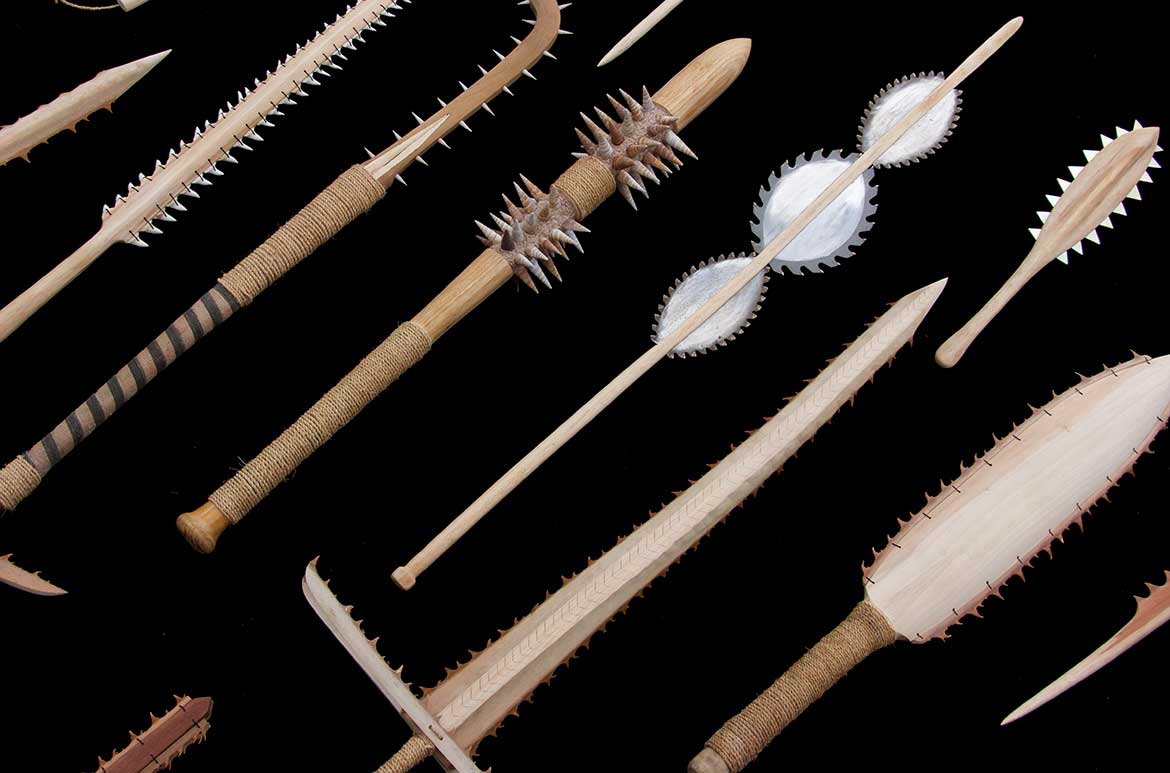 Chris Charteris’s elegantly crafted swords, commissioned for ‘The 9th Asia Pacific Triennial of Contemporary Art’ (APT9) are made from a variety of natural and contemporary materials that reflect both the Pacific environment and the unique aesthetics of Kiribati culture. Each sword is a ‘one-off’ creation and tribute to the ingenuity, courage and resilience of this Micronesian community.

Bwebwerake — a Kiribati word meaning to grow or to evolve1 — is the title of Chris Charteris’s new sculptural work acquired for the Gallery’s Pacific collection. The word itself evokes the receding shorelines of this expanse of Micronesian islands. Comprising 32 coral atolls (and one raised limestone island) across three main island groups, the nation of Kiribati has the largest sea-to-land ratio in the world, with a total land area of 811 square kilometres spread over 3.5 million square kilometres of ocean.2 What has it meant for Kiribati’s people and culture to grow and evolve against this backdrop? Chris Charteris’s work for APT9 consists of 21 singularly designed, functional shark-tooth swords and is both a celebration of the extraordinary resourcefulness and customs that distinguish the Kiribati community, and a finely tempered testament to the artist’s unique experience with this place.

Chris Charteris is a sculptor and jeweller of English, Kiribati and Fijian descent, based in Aotearoa New Zealand. He was adopted at birth and, until his mid twenties, believed that his paternal heritage was Māori. Consequently, as a teenager he studied and taught carving, which led to work in marae (sacred places) restoration and then to running a Māori art gallery in Dunedin. Discovering his Fijian and Kiribati heritage in 1995 marked a turning point in his practice towards this Pacific ancestry.3

In 2012, upon his return from a trip to Kiribati during which he reconnected with his Kiribati family and heritage, Charteris initiated Tungaru: The Kiribati Project in collaboration with his wife Lizzy Leckie and filmmaker and animator, Jeff Smith. Bwebwerake forms part of the most recent iteration of Tungaru created for APT9. Charteris’s visit to southeast Queensland in 2017 was an important step in the creative process — he and his collaborators met with members of the local Kiribati community and studied both a suit of coconut-fibre armour and a series of swords that are being cared for in the collection of the Queensland Museum. Reflecting on the Kiribati collections of numerous museums around the world, Charteris describes the swords as ‘one-off’ creations. ‘They are totally unique and don’t follow a typical form’, he says, and they can be made from a wide range of materials, including large fish jaws, whale bones, shells, shark’s teeth, pandanus, te kora (coconut fibre), hardwood and stingray barbs.4

Bwebwerake refers both to the fan palm that Charteris has used to make his swords and his commitment to exploring new forms in response to new research. His swords are made from a variety of natural and contemporary materials, consciously reflecting the manner in which his Kiribati ancestors would have employed whatever materials could be found in their environment to create what was necessary for survival. He is also interested in how the swords were designed to inflict injury rather than kill (cutting or spearing the body without damaging vital organs). Whilst fighting was common as a way to resolve disputes, war was not. Fighting that caused death was socially unacceptable, and killing a person was a crime. Rather than be killed for such a crime a fighter would ask that a piece of his land be taken instead.5

A Western idea of ‘art’ has little meaning in Kiribati culture — the value of an object is based on its usefulness.6 Bwebwerake seeks a delicate and accomplished balance between artistically honouring the unique aesthetics of Kiribati culture while retaining functional use. Each sword is a tribute to the ingenuity, courage and resilience of this community, their intimate connection to the ocean and dependence on its resources, their textured history and hard-won survival.

In the shallows between reef and ocean, I-Kiribati people build robust heart-shaped structures from broken coral to trap fish on the tides. Known as Te ma, these structures can be found up to 100 metres from the shore and are collectively owned and maintained by Kaainga (communities). Like the Te ma in Kiribati, Chris Charteris’s fish trap is constructed from a natural resource found in abundance where he lives – ringed venus shells from the sandy beaches of the Coromandel Peninsula on the North Island of New Zealand. Friends and family helped to stitch together the 8000 pairs of shells to form the 7.4-metre-long wall honouring the spirit of communal participation and ownership.

Related: Art activities to do with kids These performances by the Brisbane Kiribati community on the opening weekend of APT9 feature song and dance in response to the ‘Tungaru: The Kiribati Project’. Tungaru is a collaborative project inspired by the strong connections that New Zealand born artist Chris Charteris has made with his ancestral homeland and extended i-Kiribati family. The indigenous name for Kiribati is Tungaru, which means to gather together in a joyous way.

View the work of Chris Charteris and more on Level 3 at the Gallery of Modern Art until 16 June 2019 during ‘The 9th Asia Pacific Triennial of Contemporary Art’ APT9: Extended.

‘Tungaru: The Kiribati Project’ has been supported by Creative New Zealand