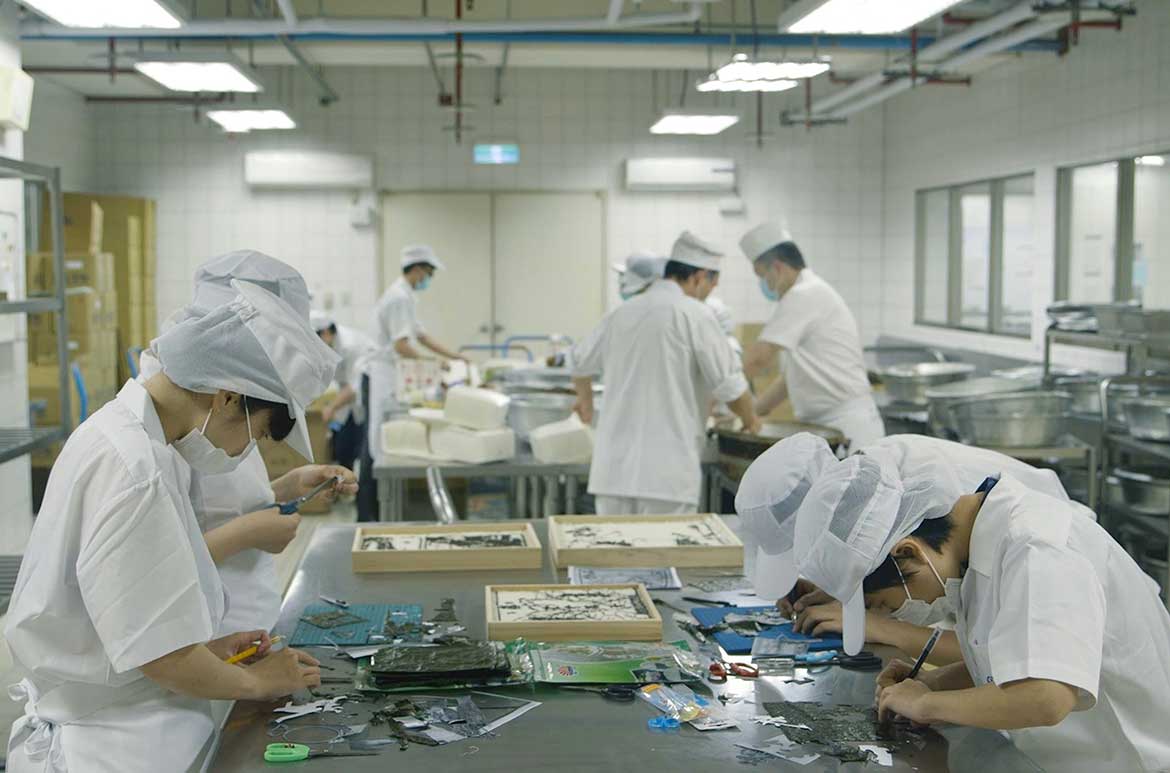 Hou I-Ting’s work consistently examines the way the human body is represented in images from distinct historical periods, and she is particularly interested in the depiction of women through different technologies, from photography to augmented reality. Her recent work explores the role of women in the workforce, the products of their labour, and the ways these reflect the various regimes that have ruled her home of Taiwan. Taiwan has a complicated history of Dutch, Spanish and Qing Chinese colonialism, Japanese occupation and Kuomintang martial law, which preceded the global liberal democracy of today.

White uniform 2017 looks at women’s work in creating a local variant of the bento box — known as bendong in Taiwanese Hokkien and biantang in Mandarin — which has persisted as a cultural legacy of Japanese occupation. Consisting of a short film and a series of photographs, the work was produced in collaboration with the employees of the Taiwan Railways Administration kitchen in Qidu, near Taipei. The film focuses on a group of women as they use stencils to finely cut sheets of seaweed to be placed over rice, reproducing historical designs from the covers of bendong boxes. The accompanying photographs document these designs, which were created during the Japanese colonial period (1895–1945), a time when Taiwan’s railway was intensively developed to facilitate the transportation of natural resources for export. Most designs are innocuous, their Japanese text advertising sandwiches, chicken lunches or bananas from Taichung; however, others are more ambiguous, resembling wartime propaganda.

The film also highlights a division of labour between male and female workers. We learn that men, occupying the background of most shots, work on heavier tasks, such as packing and lifting, while the women, hunched over tables, take care of more delicate jobs, like arranging food within the boxes. Intercutting historical footage of Taiwanese rail travel, Hou uses the device of interviews with staff members and their supervisor to emulate the tendency of the mind to wander — during long journeys and repetitive work, alike. Employees detail their working day, with its long hours and budgetary constraints; they explain the history of the bendong, and describe its enduring popularity, in which eating habits and nostalgia play significant roles; they introduce their own recollections of their jobs; and they reminisce about their experiences of railway meals when they were children.

Hou was inspired by the persistent practices of homemade and hand-prepared meals in an age of fast food, drawing on the diligence and flair with which Japanese mothers prepare their children’s bento boxes, the complex networks that enable the delivery of tiffin lunches in India, and the unfailing, romantic association of bendong with railway travel.

The kitchen that creates these boxed meals is itself a gendered organisation, pointing to the more complicated, rationalised production lines of ubiquitous fast-food outlets. This only deepens the complexity of the politics into which the artist delves in her work — a configuration of sexual difference and labour relations, colonialism and national identity, collective history and personal memory. With Hou I-Ting’s White uniform, these intricacies are articulated in the simple enjoyment of a packed lunch on a long train ride.

Free, and curated for audiences of all ages, ‘The 9th Asia Pacific Triennial of Contemporary Art’ (APT9) profiles artworks by more than 80 artists, groups and projects from over 30 countries, and is presented across the Queensland Art Gallery and the Gallery of Modern Art.