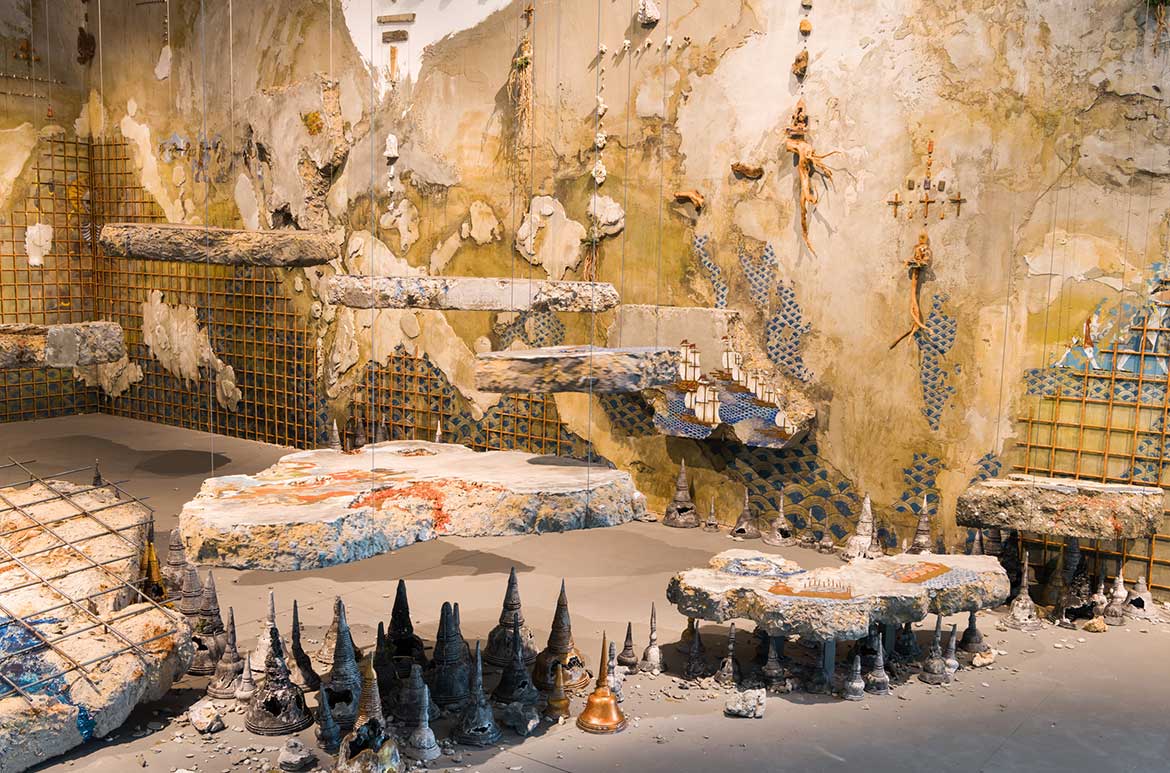 Hear from the artist

From the age of ten, Pannaphan Yodmanee learnt traditional painting techniques at her local Buddhist temple. She now draws on Buddhist cosmology to create site-specific installations that resemble both the details of murals in the ruins of old temples and the remains of demolished urban sites. Architectural settings are constructed using building materials, including slabs of concrete, exposed iron structures and walls primed with concrete and rocks, into which Yodmanee places objects and paints detailed imagery.

Within this raw built environment, Yodmanee delicately paints scenes depicting historical events in South-East Asia, including conquests and battles, as well as journeys across land and sea, applied with gold leaf and using the vivid blues of Buddhist painting. The works also feature handmade sculptures and icons. For her work for APT9, the artist has created thoughtful connections to local history. Yodmanee is particularly interested in the roles that faith and religion play in our lives — their capacity to foster peace and happiness, and their implication in conflict and violence.

Related Pannaphan Yodmanee ‘In the Aftermath’

Steeped from childhood in traditional Buddhist painting techniques, Pannaphan Yodmanee is part of a new generation of Thai artists. Yodmanee’s In the aftermath is a sharply resolved composition of painted, sculpted and found materials that coalesce into an enthralling mise en scène. Its primary foundations are demolished concrete walls, abstractly ‘grid-lined’ by steel-reinforcing wire. It is as if the impact of an earthquake has ruptured a temple courtyard, its surviving fragments of beauty reduced to ruin. At one level, In the Aftermath is a meditation on the coexistence of faith and civic life. At another, it materially collapses the splendour and pageantry of Thailand’s past in order to reflect on recent civic upheavals.

The Foundation’s 40th anniversary and 2019 artwork appeal for In the aftermath 2018 was an opportunity to reflect on the generosity of the Gallery’s many supporters who have contributed over the past four decades. Find out more about the QAGOMA Foundation.