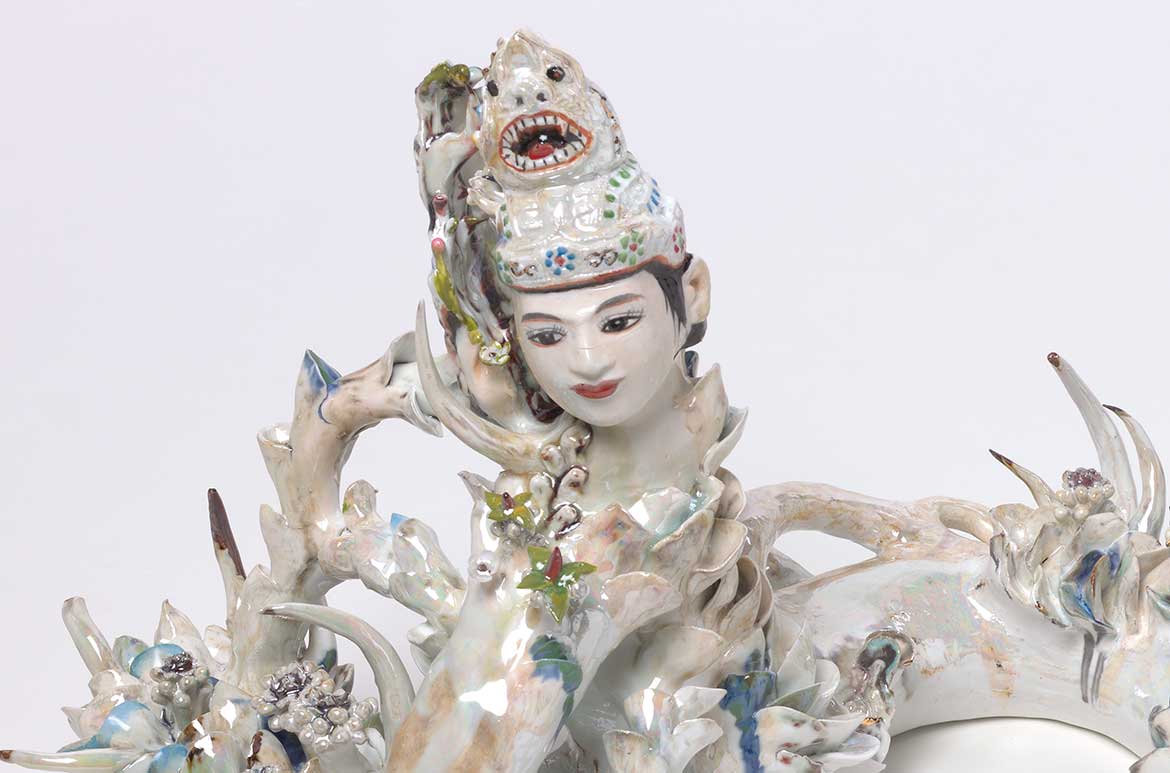 Ceramicist Soe Yu Nwe draws on the folklore and vernacular arts of Myanmar, as well as Buddhist and animistic practices. Working with clay allows her to express her feelings of disconnection when away from home, and to explore elements of her culture and heritage.

In her works, the female body is often fragmented and transformed into visceral, semi-botanical sculptures, resembling vessels formed from tangled thorn bushes, overgrown with weeds and flowers. The serpent is significant personally and symbolically, representing transformation and sexuality. In Myanmar, the goddess of serpent dragons is Naga Mae-Daw, often venerated in the country’s numerous pagoda temples. Said to be of pre-Buddhist origin, she rules over magical spirits known as Nagas, transformative snake-like beings that live in rivers, lakes, oceans and in the bottom of wells.

Painted wooden idols representing gods, goddesses and mythical beings; pagoda temples; marionettes; the heart-shaped leaves of the Bodhi tree; and ‘spirit houses’ – shrines built to placate the spirits of trees, forests and mountains that have been disrupted by human habitation – all inspire her practice.

In the aftermath resembles both the decaying murals in the ruins of old temples and the rubble of demolished buildings. The installation is based around three key elements: rocks and stones from the artist’s hometown representing the natural world; found objects and fragments of buildings; and miniatures of Buddhist icons and sacred stupas, which have been created by the artist in a range of materials. Pannaphan Yodmanee’s works have developed a new platform for Buddhist art, while they simultaneously capture the interconnectedness of art, religion and history in contemporary Thai society.

Read more about Soe Yu Nwe and Pannaphan Yodmanee in The 9th Asia Pacific Triennial of Contemporary Art available online or in store. The publication represents an important and lasting document of the current artistic landscape of Australia, Asia and the Pacific.