To commemorate GOMA’s fifth birthday the Gallery Store has produced a range of limited edition t-shirts by three of Australia’s leading artists.

Artistic, stylish, provocative, and just downright stunning, these tees represent the coolest way to dress this summer and beyond.

Wearing one will guarantee…

Of course there are many reasons to buy these exclusive Gallery tees, but most of all they are limited to 100 per edition and will be collector items in the future. Here is some information on the artists so you don’t get caught out!

Robert Macpherson (above): Robert has remained one of the most respected and critically­—supported artists of his generation for nearly four decades. A conceptual artist of immense influence and output, his reputation and commitment to challenging the viewer visually, conceptually and intellectually has never wavered. Whether working in painting, text, found object or installation, Robert’s work resonates on many levels with his audience, stimulating and questioning the spectator simultaneously.

Fiona Hall (below): Fiona is one of Australia’s leading contemporary artists. She began as a photographer and later transitioned into sculpture, painting, installation and video. Fiona transforms everyday objects to address concerns such as globalisation, consumerism and colonialism with her main focus being the relationship between nature and culture. Her magical transformation of common materials into works of breathtaking beauty has given Fiona the international reputation she so richly deserves.

Richard Bell (below): Richard is an established Indigenous artist whose works combine both image and text. He appropriates styles and motifs from other artists’ work to create his own significant messages. Artist, provocateur, political commentator, actor, filmmaker, comedian, visionary — all titles that can be bestowed on this renaissance man of Australian and international art. ‘It’s my job as an artist to test people’s resolve, to provoke thought and that’s what I do, I provoke thought and discussion.’ Richard Bell 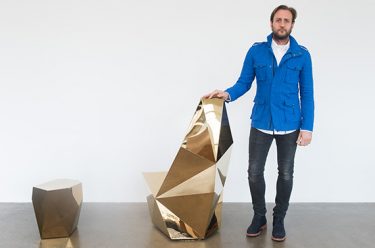