From enigmatic artworks to repurposed images, I’m sure many can testify to similar experiences of being introduced to visual artists and its many ‘genres’ via their record collection.

In the second in the series — Sleevage: Collaborations between art and music — these musical conduits highlight the compact lessons in the history of art and design that artists in the QAGOMA Collection, such as Ryan McGinley, Tony Clark, Cindy Sherman, Sol LeWitt and Yoshitomo Nara, can provide listeners.

Nothing says nature and nudity quite like Icelandic post-rockers Sigur Rós 2008 album Með suð í eyrum við spilum endalaust (With a Buzz in Our Ears We Play Endlessly).

Depicting four skinny youths joyously free spiriting across a motorway, McGinley’s photograph perfectly evokes the synergy between Sigur Ros’s looser and more spontaneous approach to writing and recording With a Buzz in Our Ears…

Friends with Nick Cave since the 80’s, Australian painter Tony Clark was asked to come up with a landscape for the band’s upcoming 1998 retrospective album — The Best of Nick Cave & The Bad Seeds.

Paying homage to the popular 19th century pictorial card game Myriorama, a game made up of a sequence of cards that could be rearranged into any order to produce a continuous scene, Clark’s chosen sections from his own ongoing Myriorama series show ‘six crippled olive trees blasted by a bloody red light’.1

Integral to the image is the shared horizontal bands required for a Myriorama sequence to work. For Clark, it was crucial that the cover show the split in the image as it indicated that each section could work as an independent work or be matched alongside others from the series to construct an endless panoramic landscape no matter what order you arranged them in.

And for Clark, vividly bringing to life the unsettling and eerie beauty of The Bad Seeds music was ‘about as good as it gets’. 2

Minneapolis alt-rock band Babes In Toyland hooked up with friend and artist Cindy Sherman for the cover of their 1992 album Fontanelle. Playing off the band’s name and the “soft spots” found in an infant’s human skull, the cover features a child’s doll splayed out on top of a dresser.

The Babes and other feminist musicians of the early 90s adopted images of dolls, girlhood and plastic body parts as a direct response to the sexualisation of women, gender identity, body autonomy, and power structures of the male-dominated punk rock scenes.

Hinting at Sherman’s Sex Pictures 199) and prefiguring her Horror and Surrealist Pictures 1994–96, Sherman remarked in a 1997 interview that ‘I wasn’t really interested in showing traditional sex; the most obvious thing to do with mannequins would be to “put these parts together and do a close-up.” ‘I was more interested in using the sexuality of loaded images to say something even greater than that sexuality.’ 3

Music in Twelve Parts is a set of twelve pieces written between 1971 and 1974 by the American composer Philip Glass. Regarded as a major compositional work, Glass’s friend, the pioneering Minimalist and Conceptual artist Sol LeWitt, created a sleeve that fittingly resembled a music score.

Gravitating towards the New York experimental scene of the 1960s and 1970s, LeWitt worked across visual art, performance and music, often equating his working methods, repetitive structures and written instructions to that of composers like Glass and fellow American Steve Reich who generate musical notation for others to play and interpret: ‘It’s as though I were writing a piece of music for somebody to play on the piano — there’s plenty of opportunity to improvise within the limits.’ 4

Identifying with their unhinged guitar wielding, DIY attitudes and outsider lyrics, his paintings and drawings riff on the isolation, alienation and ‘emotional intensity’ found in the lyrics of his favourite punk, folk, and rock and roll heroes: ‘Then I came into contact with punk — this music struck a nerve and penetrated me deeply. It matched the way I was feeling at the time and I have remained true to punk.’ 5

Ever the fan, Nara continues to resonate with audiences beyond the art world with bands like Shonen Knife, Yo La Tengo, Fantômas, Jim Black, Matthew Sweet and R.E.M. commissioning Nara to represent the contemplative and melancholic bent these bands are known for.

Discovered new artists via your record collection?
Have a favourite art/music collab?
Share it with us below in comments.

‘Sleevage: Collaborations between Art and Music’ is currently on display in the QAGOMA Research Library. Make an appointment to visit the Research Library located on Level 3 of the Gallery of Modern Art (GOMA) from Tuesday to Friday, 10.00am to 5.00pm. Access to special collections is by appointment only. Contact the Library on (07) 3842 9557 or explore our online catalogue.

Creating a unified package of complex and intuitive meanings, these rich and imaginative miniature canvases have provided visual artists with populist exposure, and musicians the intellectual cachet that comes with being affiliated with such major artists as Andy Warhol, Garry Winogrand, Nobuyoshi Araki, Tony Clarke, Sol Lewitt, Robert Rauschenberg, Yoshitomo Nara, and many others.

Drawn from the Library’s collection gifted by Queensland artist Scott Redford and those in my personal collection, explore my Top 5 favourite art/music collaborations and visit us for Record Store Day on 12 June. 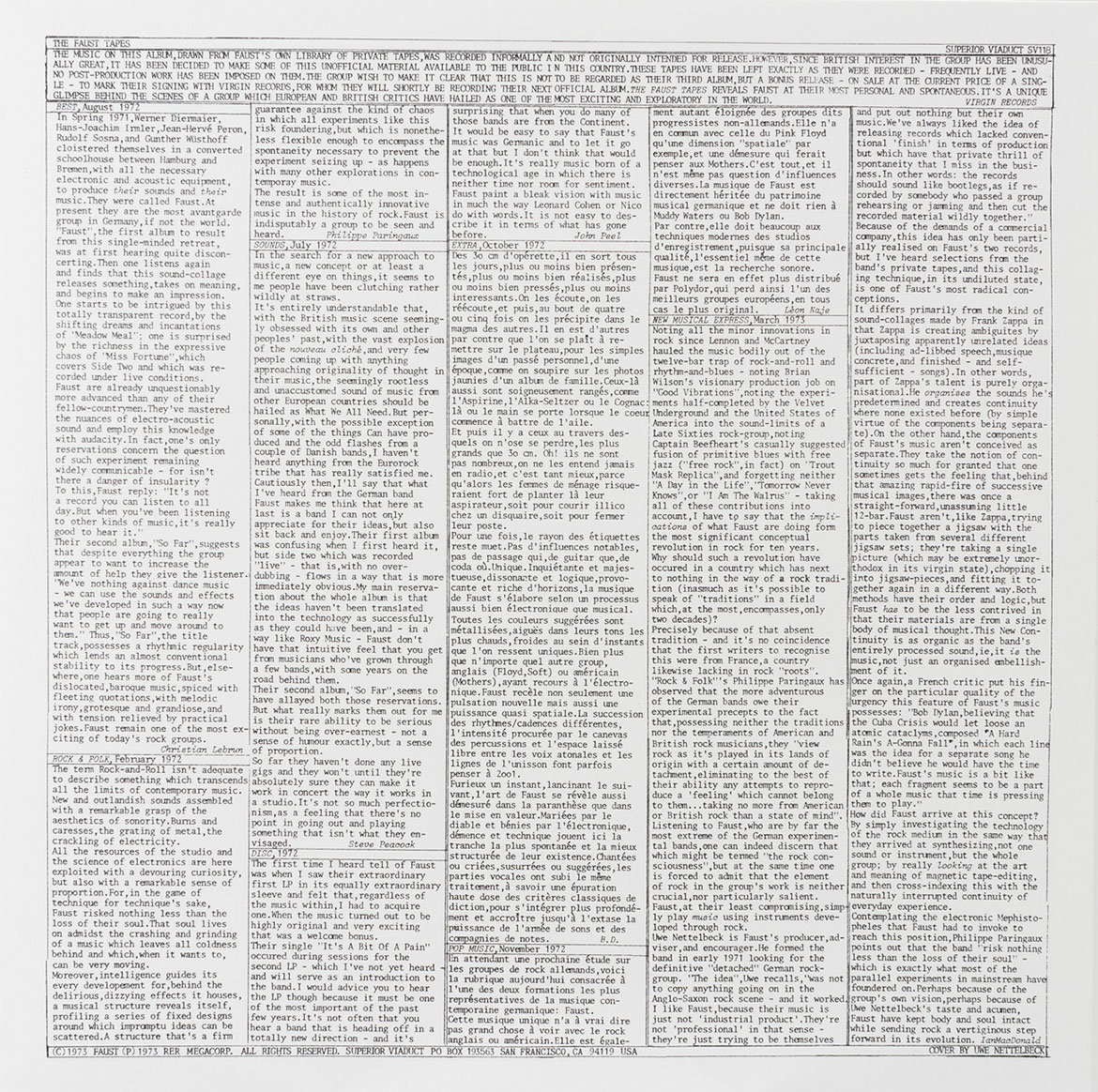 Expansive and mind-altering German experimentalists Faust’s 1973 album, The Faust Tapes, featured Bridget Riley’s painting Crest 1964 on the reverse without any explanation. Flooding the brain with rhythm, repetition and pattern, the use of Riley’s monochromatic curves induced the same sensations brought on by psychotropic drugs — much to the delight of those wanting to space out. Bemused to see her work sought out by those interested in psychedelics, Riley remarked:

I was surprised to be seen as a sort of representative of an aspect of the psychedelic culture. It was a collision between my intentions as an artist and the cultural context in which I found myself. I remember being told as though it was some sort of compliment that it was the greatest kick to go down and smoke in front of my painting.1

Seminal Brisbane band The Go-Betweens enlisted painter Jenny Watson to paint portraits for their debut album, Send Me A Lullaby (1981). Part-psychoanalysis, Watson’s portraits characterise the band’s interpersonal relations – Robert and Grant were best friends and Lindy, the band’s drummer, was Robert’s girlfriend. Reflecting on the portraits in his memoir Grant and I, Forster observed that ‘She got the three of us with precision, placing us on the album with the touch of a master psychologist’.2

The portraits were acquired in 2002 by the National Portrait Gallery of Australia and, like the streets of Brisbane, the portraits are considered a pilgrimage for The Go-Betweens’ fans. 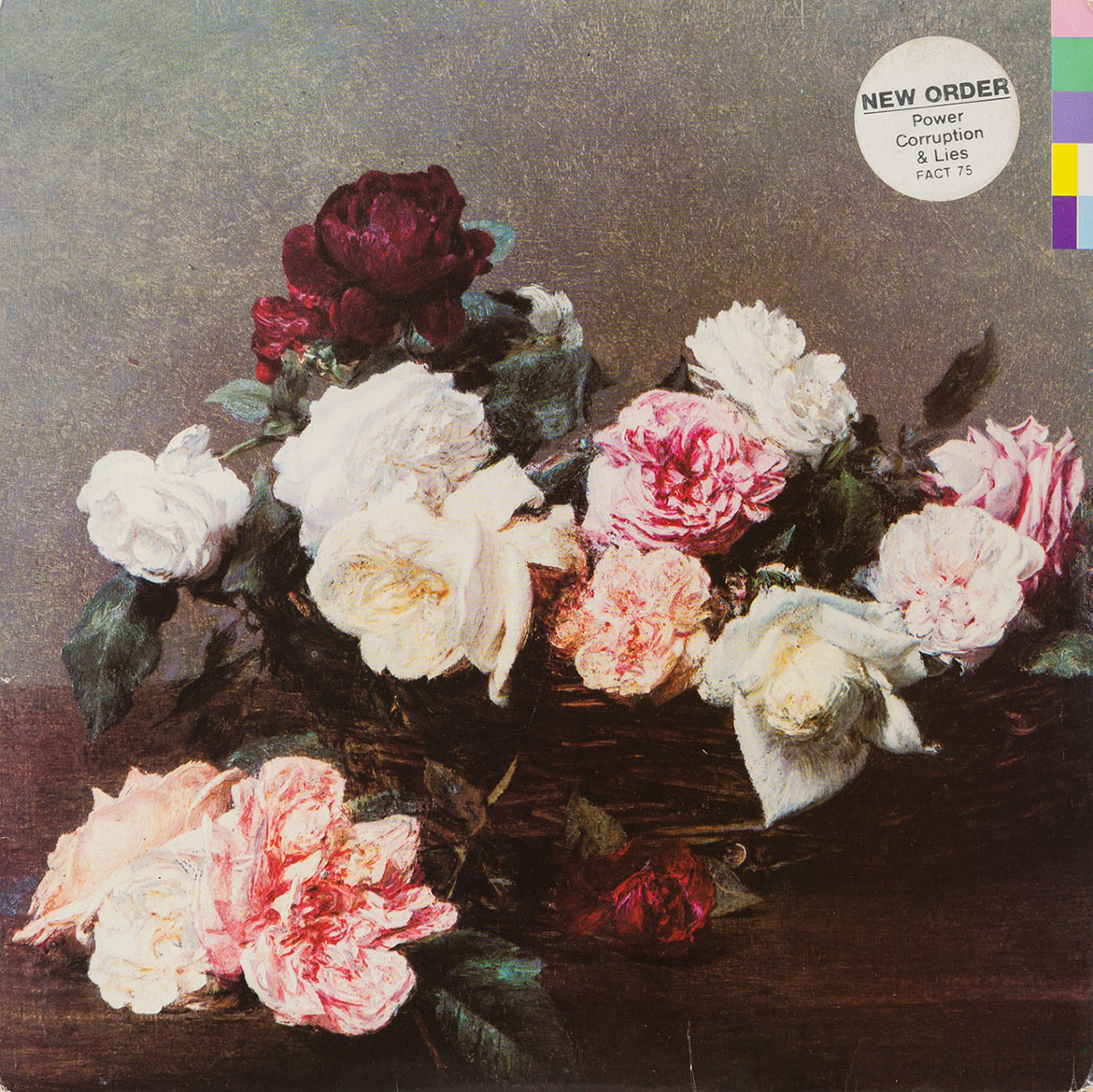 Both subversive and intriguing, New Order’s 1983 album Power, Corruption & Lies features Henri Fantin-Latour’s luxuriant still life A Basket Of Roses 1890 from the collection of the National Gallery, London. Wanting a kind of ‘Machiavellian image’, graphic designer Peter Saville juxtaposed a digital colour bar that could only be deciphered using the back cover’s colour wheel made up of 26 subdivisions of tints — each representing a letter of the alphabet denoting the album’s title.

Providing compact lessons in the history of art and design, Saville’s curatorial approach invited record buyers to see pop music and commercial graphics in the same register as fine art. The cover’s continued influence is still felt almost 40 years on from its release: From limited edition Raf Simons parkers, to streetwear icons Dr Marten boots and Supreme, to the Royal Mail’s inclusion in its 2010 Classic Album Covers of the last 40 years stamp collection. 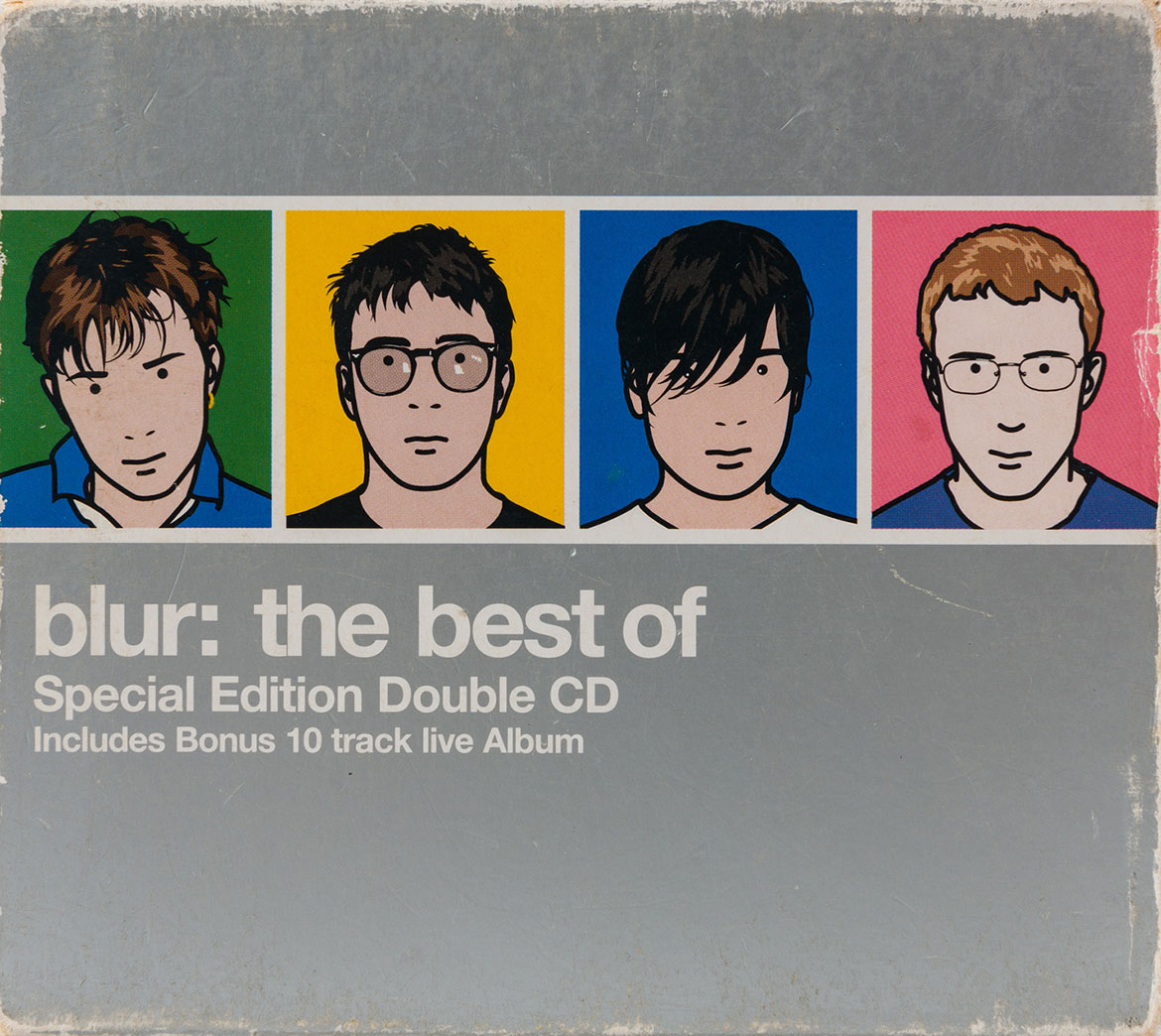 Blurring the visual languages of commercial art and public signage, British artist Julian Opie’s brightly coloured and ‘schematised’ portraits for Blur: The Best Of (2000) speak again to this alliance with popular culture.

Rendering Damon, Graham, Alex and Dave like a ‘multinational company with a logo’, Opie’s portraits effortlessly translated to in-store advertising, music magazines, bus and train livery, and the huge hanging backdrop that can be seen behind the band as they perform on BBC music TV show Later with Jools Holland.

Recognisable and distinct as any photograph could be, the portraits were acquired by the National Portrait Gallery in London and are firmly thought of as one of Opie’s most memorable and accessible works. 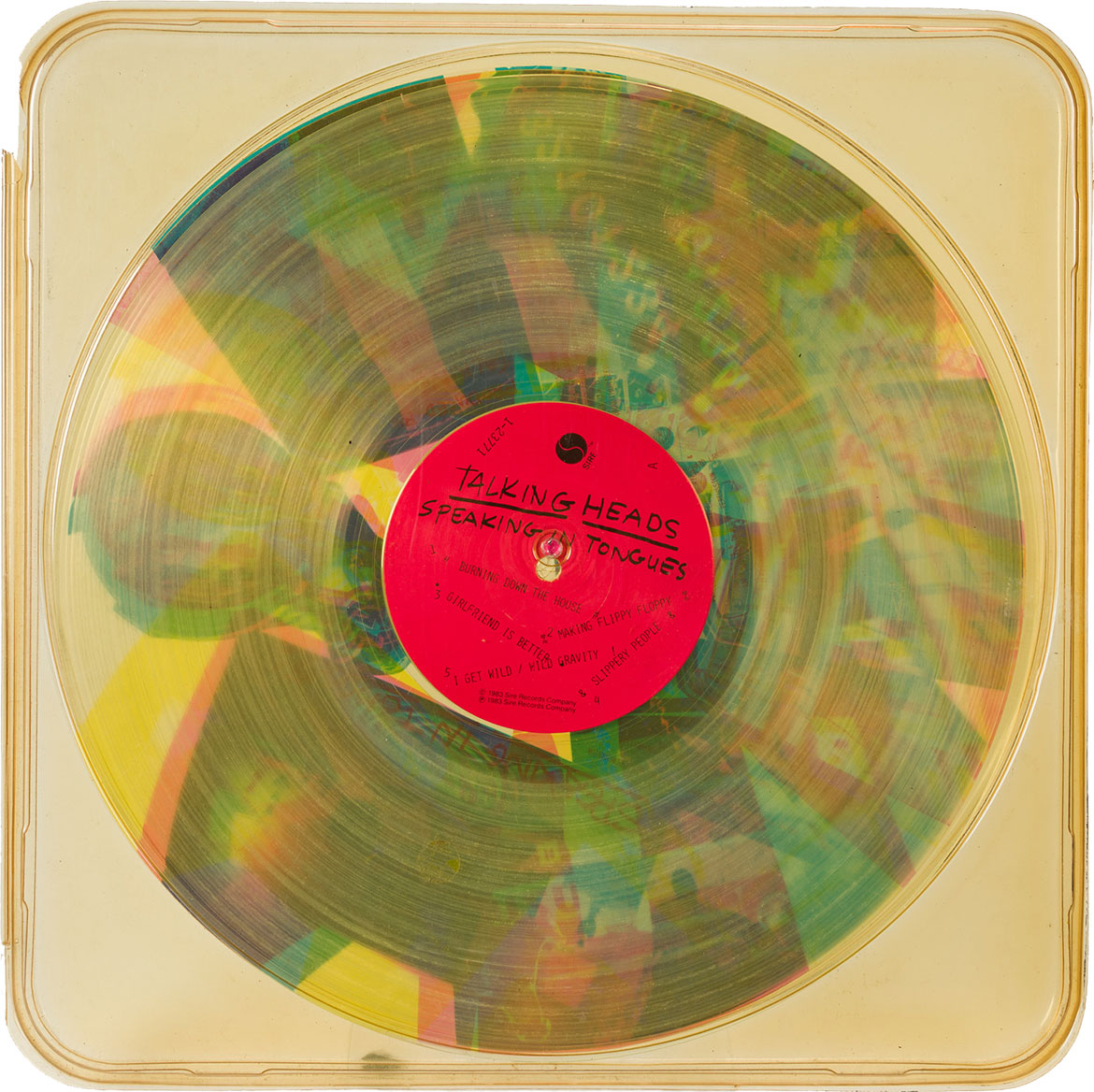 Pressed on to three separate Plexiglas —- one per primary colour — are fragments of scattered text and images of wrecked cars, highway billboards and suburban bedrooms, which can be endlessly configured by the listener.

Perfectly embodying Talking Heads’ densely layered approach to making music, the limited edition LP retailed for just $12.98 at the time — a real bargain for a Rauschenberg! The 12-inch vinyl record making the collection of the Museum of Moden Art, New York

Make an appointment to visit the QAGOMA Research Library located on Level 3 of the Gallery of Modern Art (GOMA) from Tuesday to Friday, 10.00am to 5.00pm. Access to special collections is by appointment only. Contact the Library on (07) 3842 9557 or explore our online catalogue.