Ghost net art — a movement that has swept through communities on the coastline of northern Australia since 2009 — has become an important way for artists to raise awareness of a seemingly insurmountable environmental problem: the abandoned fishing nets that cause immense devastation to ocean life and marine ecosystems. Lynnette Griffiths, Marion Gaemers, and the artists living on Erub and working as part of the Erub Arts collective, are at the forefront of this exciting and important crusade, reminding us that ocean conservation is everyone’s business.

The ghost net collaboration between Griffiths, Gaemers and Erub Arts emerged from a workshop on Erub in 2010, where participants made utilitarian items such as dinghy cushions and bags. The community had hoped for some early sponsorship to make more substantial works, but in the end, it was Griffiths who moved the project forward with the large ghost net sculptures, while Gaemers finessed detail and surface with decoration techniques.

‘This whole bag of net just sat there at the edge of the Art Centre and became a rat’s nest. It was horrible!’, Griffiths recalls. ‘One day Diann [Lui], the Art Centre Manager, and I said, “We have to get this out of here. We’ve got to either throw it out or Gerni it”.’

When they decided to clean it, Griffiths said the material came to life:

It was like magic. We started to look at the fibre. A lot of ghost net art doesn’t do that. People are simply making things with the net and not deconstructing it. So that’s when we really started to pull it apart, and the first lot of felting came about when we swept the floor.

Prior to this, artists outside Erub had used the discarded nets to make coiled baskets and other useful objects, but Griffiths saw the potential for larger creative projects. ‘[We asked] “How do we make other things?” And the first big object we made was a giant squid . . . I think we were the first community to start making large animals’, she says.

The collaboration and relationship between Indigenous and non Indigenous artists living on the island, which Griffith says has long been part of the region’s history, is a central aspect of the project. ‘Torres Strait people have always been traders — they’ve always traded towards New Guinea and towards the mainland,’ she adds. ‘The Straits have been a waterway, a highway for a very long time. So that level of trade and exchange is certainly not new.’ Today, Griffiths says that the community works together from the outset on all major projects, discussing materials, techniques, participation and purpose:

When we start a project, [we begin by asking], ‘This is the space, this is the premise — what are we going to say?’ We have big meetings together and talk about how that might look. If there’s something new, we always run through the techniques that we’ve developed together. There’s the felting, the coiling and the twining. It is developed collaboratively and that’s proved to be a strength. Everybody feels ownership. And that’s what we want to do here. Globally, we’re all connected by the ocean, so we all own this problem.

The material of the nets often determines how a work takes shape. Since the netting is so malleable, small objects can be shaped without wire and made by hand. ‘It’s part of what we do, isn’t it?’ Griffiths says. ‘You know, look around, everything is made. But you haven’t made it out of a raw material, you’ve made it out of a repurposed material. And I think that’s a hook’.

For the community of artists on Erub, part of the attraction of ghost net art is turning something destructive into something beautiful. Griffiths says:

I’m not a weaver. But when I’m trying to manipulate plant material, it really doesn’t do the same thing for me. I don’t know why, but it doesn’t. I couldn’t tell you what it is. But I get a real joy out of remaking something that’s quite damaging. To then create something of great beauty with a message behind it, is very powerful . . . And I think everybody can relate. Everybody, whether you’re this big or this big [she gestures], from university or not, or from an informed background about art or not, you can bring whatever you know to what you’re looking at, because everybody understands what this rope is. Everybody’s been to the beach, everybody’s seen rubbish . . . everybody has an entry point to this. And I think that is
what gets people.

If we don’t have hope and solutions to these bigger global problems, we’re going to end up in huge trouble. I don’t just want to shock people. We want to see how people are using the material, how they’re interpreting it. What other ideas are there? Children and adults alike. [We have] a collective problem — let’s try and create something together out of this hope.

Tamsin Cull is Head of Public Engagement. She spoke with Lynnette Griffiths in August 2019. 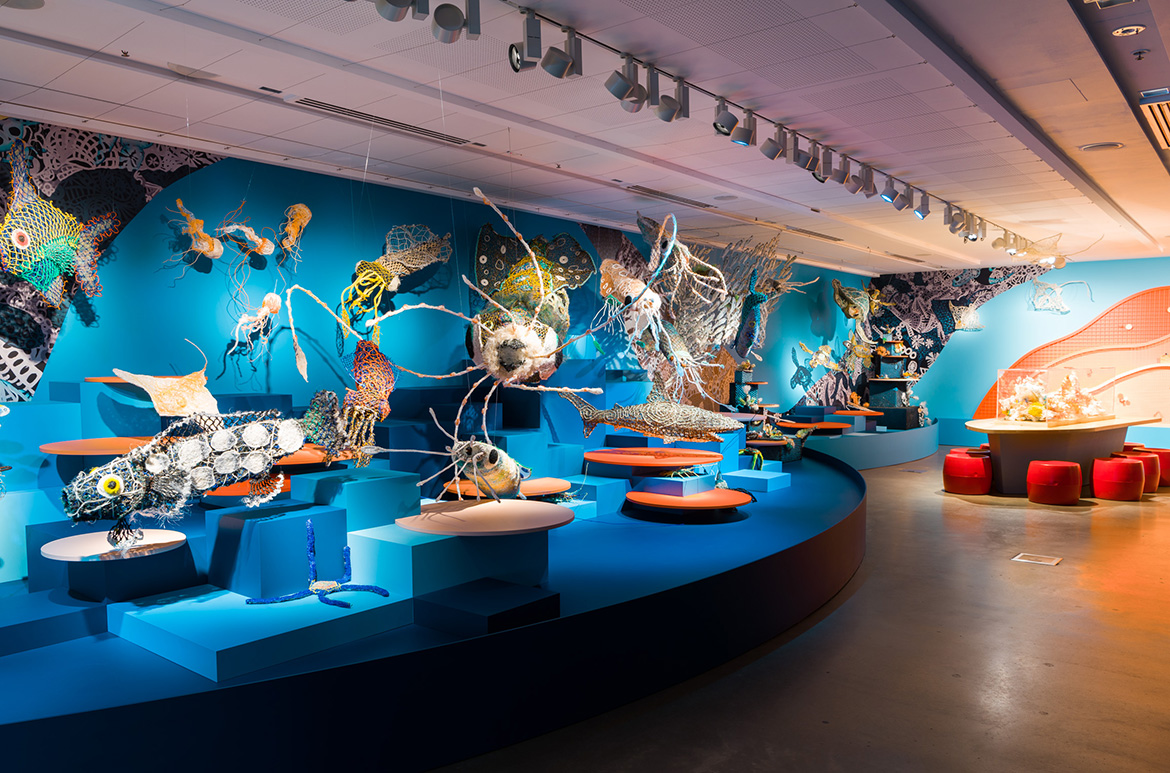