A presentation of new work by eight artists from Taiwan’s Atayal, Paiwan and Truku communities, in ‘The 10th Asia Pacific Triennial of Contemporary Art’ (APT10) project Between Earth and Sky offers a glimpse of the vitality and diversity of indigenous contemporary practice in Taiwan. As four decades of martial law in Taiwan were relaxed at the end of the 1980s, the voices of the burgeoning democracy movement were joined by those of the island’s indigenous peoples, seeking official recognition, self-determination and the right to use personal names in their own language. With linguistic and anthropological links across the Austronesian world, Taiwan’s indigenous people have made the island their home for more than 5000 years. Since the early seventeenth century, successive waves of colonisation by European and Asian powers have seen them subjugated, dispossessed and assimilated, with loss of culture and language accompanying lack of access to land, education and economic opportunities. The emergence of contemporary art by indigenous artists provided an avenue for cultural revitalisation, the expression of identity and the creative consideration of current realities. On the other hand, it also enabled artists of indigenous heritage to participate in the wider field of contemporary art, rather than being framed as practitioners of ‘folk art’ or ‘craft’, or indeed being restricted to representing their ethnicity.

While Paiwan artist Er Ge and Beinan artist Haku were included in the 1996 Taipei Biennale, the terms ‘contemporary’ and ‘aboriginal’ were not used together in art discourse until 1999.1 The establishment of the first dedicated collecting program by a public institution came as recently as 2006, with the launch of Kaohsiung Museum of Fine Arts’ ‘Austronesian Contemporary Art Development Plan’. Yet, while institutional frameworks are relatively new, indigenous artists have been producing incisive, innovative work for at least 30 years, when the likes of Amis carver and performance artist Rahic Talif and Paiwan sculptor Sakuliu Pavavalung began forging international networks and mentoring younger artists. The field is wide and diverse, reflecting the distinctiveness of Taiwan’s indigenous peoples, with 16 official ethnic identities and many more in the process of seeking recognition.

Between Earth and Sky provides a hint of this vast and vibrant field, focusing on practices that draw on indigenous histories and cosmologies to propose more sustainable futures. Paintings by exhibition co-curator Pavavalung (illustrated) and Atayal pastor Anli Genu (illustrated), as well as elaborate soft sculptures by Paiwan leader Aluaiy Pulidan (illustrated), use art as an expression of collective identity, reworking customary motifs into new and innovative forms. For Atayal weaver Yuma Taru (illustrated) and Paiwan ceramicist Masiswagger Zingrur (illustrated), art is a means of reviving endangered traditions and techniques; both artists filter their decades-long research into dazzling installations. Sculptor Ruby Swana (illustrated) and choreographer Fangas Nayaw of the Amis people of Taiwan’s Pacific coast (illustrated) approach the threat of climate change from the perspective of tribal knowledge, respectively exploring zero-waste living and an ‘indigenous punk’ futurism that resonates with the cross-gender, cross-medium performances of Truku artist Dondon Hounwn (illustrated).

The presentation of Between Earth and Sky in APT10 follows the inclusion of striking paintings by Truku/Atayal artist Idas Losin in APT9. It offers a further glimpse of the vitality and diversity of this exciting, expansive field of contemporary practice, deepening the APT’s engagement with First Nations artists throughout the region while enhancing the potential for dialogue with artists and communities across the Asia Pacific.

Reuben Keehan is Curator, Contemporary Asian Art, QAGOMA
This is an expanded version of an article originally published in the QAGOMA Members’ magazine, Artlines, no.4, 2021 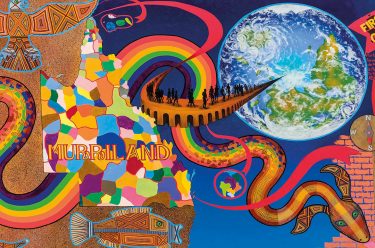