My earliest memory of the Queensland Art Gallery would either be the impossible tension that Rene Magritte creates by stripping the twilight out of his sudden juxtapositions of night and day, or the deep perspective of a lonely Giorgio de Chirico piazza rich with a sense of loss and the horizon’s unlikely possibility. Both were part of the 1993 blockbuster show ‘Surrealism: Revolution by night’, which introduced me, not only to Magritte and de Chirico but Marcel Duchamp, Salvador Dali and Pablo Picasso. It was a seminal moment in my understanding of the power and possibilities of art and the work on the walls helped mould the nascent aesthetics of this thirteen-year-old poet. They are influences that followed me around the US on my first visit to international galleries like MOMA and the National Gallery in Washington and they are artists who continue to influence how I feel about making and experiencing art. Later, I would come to cherish the APT smorgasbord, the languor of Sidney Nolan’s elongated bush gothic chancers and Willem de Kooning’s Two trees on Mary Street… Amen!, a painting that, when I was at high school, reliably transported me from Brisbane’s prosaic streets to the essential vigour of the Abstract Expressionist’s New York.

I saw a model of the Gallery of Modern Art back in about 2002 when plans were first unveiled. I loved the way the long balconies promised to open the gallery up to the river and pay tribute to the most beloved totem of this town’s architecture, a Queenslander’s veranda. When the Gallery opened I was living in London and immersing myself in the Tate Modern, the National Gallery and the small commercial galleries around Hoxton Square, but despite the history and the innovation in my weekends, I was desperate to see my new gallery by the river.

These days it’s part of a well-established, quintessentially Brisbane Museums Quartier full of open spaces, river glimpses and cool breezes; a paradise of air conditioning in a long subtropical summer. A place for internet dates and family escapes. My first GOMA memory is Not Under My Roof, a monumental site-specific work by Claire Healy and Sean Corderio hung in GOMA’s central corridor as part of ‘Optimism’ in 2008. The work is a country house’s entire floor, walls sheered off and hung like a butterfly pressed flat in a lepidopterist’s slide. The work’s narrative and poetry is in the details generations of family footsteps have written on the floor, terraforming linoleum with life’s grime. The way wood falls prey to the elements reminds us that even the structures our warmth and comfort depends on are as transient as our bodies. Since then I’ve been inspired, infuriated, enriched and educated by all sorts of paintings, photos, videos and installations. Some, like Hiraki Sawa’s O, with its haunting videos of birds and still desert landscapes and spooky soundtrack and unsettling boxes scattered in dark corners, I’ve fallen in love with. I must have seen it on six or seven different visits and I’ll be back to see it six or seven times more when it comes out of storage. Ask me in three months and I’m almost certain I will feel the same way about Anthony McCall’s Crossing, a spectral light sculpture, commissioned with the support of Tim Fairfax, AC and on display this summer.

But this isn’t about what the Gallery means to me. It’s a pitch, on GOMA’s 10th birthday, to encourage you to join me in giving back and helping the Gallery to help it grow into the future. A couple of years ago a friend of mine was working at the Gallery. She suggested I get involved with a new philanthropic initiative aimed at young Brisneylanders. So, over great cheese, good wine and cold beer, I sat down with a group that included a fashion designer, a couple of stockbrokers and an architect and we all offered our ideas and suggestions about what that group could be and what sorts of things would motivate people to join.

We had humble aspirations. 20 members was our benchmark of respectability. At last count the group, ‘Future Collective‘, had 45 members. In 2014 on a hot November night at the opening of ‘Future Beauty’ we held our first event for prospective members. Already, after only two years, we’ve helped the Gallery acquire two important bodies of work. This year we commissioned work by Helen Johnson, while last year we supported the acquisition of  ‘Coming to terms’, a series of wedding photos, tweaked by attiring the wedding parties in balaclavas, by rising West Australian star Abdul Abdullah. Over the past year Abdullah’s dangerous pictures have resonated with people across Australia. The danger, the source of the real power of the pictures, emanates from the way the pictures force us to confront the way (largely) white Australia sees different othered people, particularly Muslims, and, in the reflection of this gaze we can see ourselves.

In the financial and aestheticm of art ‘Coming to terms’ could turn out to be a key work in the early career of one of Australia’s leading artists. Or not. Abdullah’s work is certainly attracting attention but early bets are never sure bets. On the upside, they’re a lot of fun and the jackpots can be healthy. Regardless of what happens I’m proud that, as part of ‘Future Collective’ I played a part in ensuring these pictures are part of the Gallery’s collection in perpetuity. Because of Tim Fairfax’s generosity, I’m going to spend at least part of this summer falling in love with a work by an artist who actually sculpts light. Think about that. By ensuring the Gallery owns the ‘Coming to terms’ series ‘Future Collective’ is ensuring somebody else can come to these works and learn something important about this world. And down the track when a curator wants to explore some trend or idea, Abdullah’s intelligent and brave works can inform that conversation. ‘Future Collective’ isn’t just about the future. It’s about right now. Meeting new people united by a passion for the Gallery and for this town. It’s about coming together to talk about art and ideas in these beautiful buildings. In our first two years we’ve enjoyed private tours from curators, we’ve dived into the Gallery’s ribcage to get a firsthand look at preparations for APT8 and burrowed into the stacks to see how art is stored when it’s not on the walls. Our members have given their time to talk about their personal collections and provided advice for people looking to embark on their own collecting journey. And of course, art wouldn’t be art without a knees up – and we’ve had a few. Even a ‘Revel’.

The real point though is our institutions are only as strong as the people who give their money and time to support them. So, for GOMA’s 10th birthday why not buy yourself and the Gallery a present and sign up for ‘Future Collective‘ and be a part of the growth of this world class institution.

See you next year. There’ll be wine. Probably from Mount Langi.

Support the Gallery through the QAGOMA Foundation 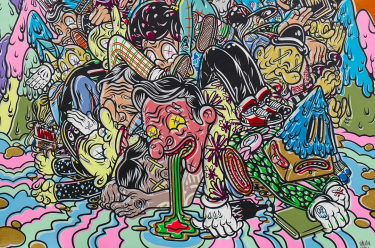