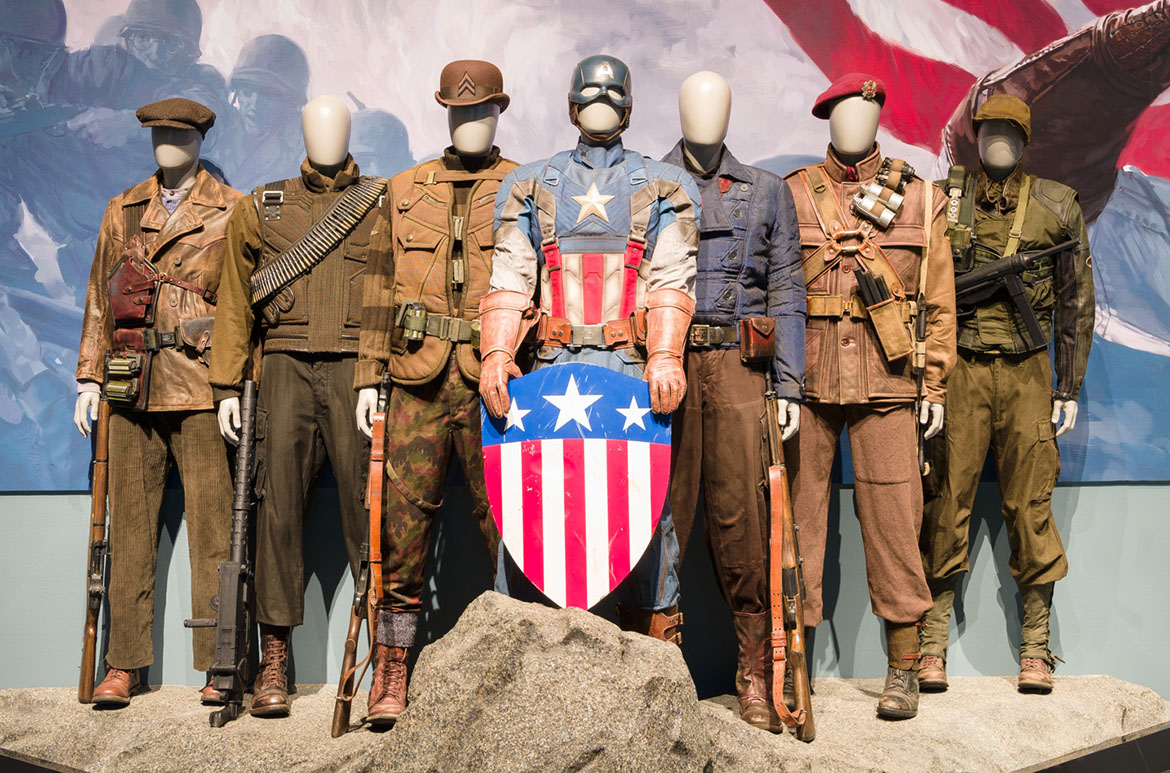 Steve Rogers, also known as Captain America, is the moral epicentre of the Marvel Cinematic Universe. Known as the First Avenger, Captain America’s timeline incorporates World War Two and the present day. A symbol of courage, strength and patriotism, Captain America is as important now as when his character was first conceived by artists Joe Simon and Jack Kirby in Captain America 1941 #1.

Despite his enthusiasm, skinny Brooklyn kid Steve Rogers is repeatedly refused enlistment in the US Army. Visiting the Army recruiting station at the 1943 World Exposition of Tomorrow, his grit nonetheless attracts the attention of brilliant German defector Dr Abraham Erskine. Rogers is then enrolled in Project: Rebirth under the oversight of Howard Stark, and is transformed into Captain America, the first successful subject of the experimental Super Soldier initiative.
Rogers’s first assignment as Captain America – leading a troupe of high-kicking showgirls to sell war bonds – is not exactly what he had in mind. It does bring him closer to Agent Peggy Carter, an accomplished codebreaker and MI5 agent, and the discovery that the regiment of his best friend Bucky Barnes was almost entirely killed or captured after facing Hydra in Italy. Carter and Howard Stark proceed to drop Captain America behind enemy lines in Austria where he completes his first act of heroics: infiltrating a Hydra base and freeing hundreds of prisoners, including Bucky.

The artwork, costumes, props and film sequences on display in the ‘Captain America: Living legend’ room highlight the rich visual history of this fictional character. Featured is the original Captain America costume, based on drawings by Simon and Kirby, while his relationships with lifelong friend Bucky Barnes and love interest Agent Peggy Carter are revealed through artwork, photographs and film sequences. The room’s central diorama portrays the elite army unit, the Howling Commandos, a crack team led by Rogers to face his nemesis, the fascist organisation known as Hydra. Artwork, costumes and props illustrate his battles with Hydra’s leader, Red Skull. From Captain America: The First Avenger 2011

Hydra is introduced as a Nazi-affiliated operation, but its wartime leader Johann Schmidt outgrows the restrictive shackles of the ideology as he uses the alien artefact of the Tesseract to power new super weaponry. In the present, Hydra has evolved into an insidious, multi-tentacled organisation that has infiltrated S.H.I.E.L.D. at the highest level. Captain America’s World War Two motorcycle is a customised 1942 Harley Davidson WLA, a model developed by the manufacturer for use by the American military during the war. It was used in an epic motorcycle chase between Captain America and Hydra soldiers during this time. Purchase tickets for ‘Marvel: Creating the Cinematic Universe‘ online or at the ticket desk 10.00am – 4.00pm daily, and until 8.00pm Wednesday. ‘Marvel’ film screenings and ‘Marvel’ Up Late are separate ticketed events.