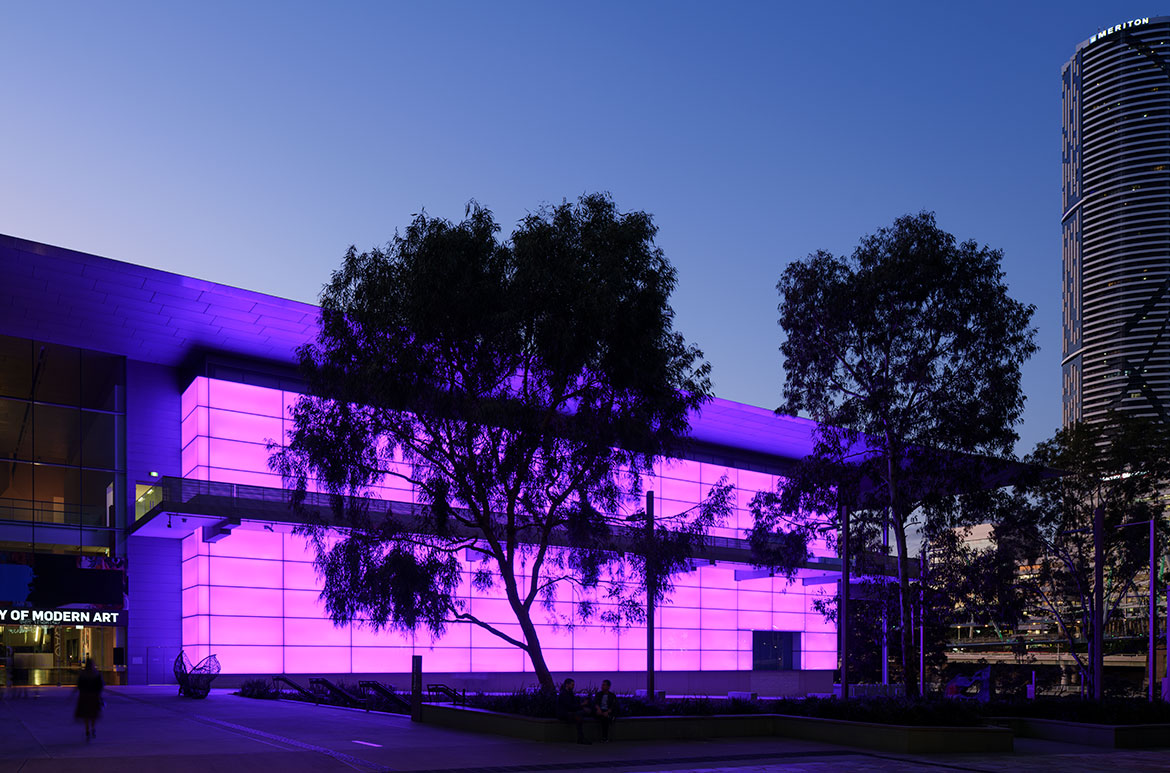 Sitting in James Turrell’s Open Sky 2004 installation at the Chichu Art Museum on Naoshima Island as part of a special sunset viewing in June 2017, I was in awe of the artist’s work. It was only my second time experiencing a Turrell. The first had been earlier that day, again at the Chichu, where I saw Afrum Pale Blue 1968 and Open Field 2000, amongst other iconic works by French impressionist Claude Monet and American sculptor Walter De Maria.

Visiting the Chichu gave me insight into Turrell’s unrivalled practice, something I’d gleaned from books, but never seen for myself. On Naoshima Island in a museum designed by esteemed Japanese architect Tadao Ando, Turrell’s command of light, space, time and, of course, pure spectacle, was on display — all the elements that would make the Gallery of Modern Art’s (GOMA) just-announced Turrell a major addition to the artist’s oeuvre.

Fast-forward 12 months to 13 July 2018, and GOMA’s Night Life — the artist’s latest architectural light work and the only one of its kind in the Southern Hemisphere — was launched into the public realm. A work of colour play that entrances and envelops, Night Life has found a place in the hearts and minds of countless Brisbane residents, as well as many visitors from around Australia and the world.

Plans for a Night Life monograph began to take shape around the time of the launch, and were driven by QAGOMA Director, Chris Saines, who had been fortunate to meet the artist at the site of his life’s work, Roden Crater in Northern Arizona’s Painted Desert, just a few months earlier.

In time, discussions turned to photography. The sentiment was that if this monograph was to take its rightful place amongst the myriad of substantial publications on the artist’s life and work then German photographer and long-time Turrell collaborator Florian Holzherr was always going to be the Gallery’s first choice.

Trusted to document Turrell’s work for more than 20 years, Holzherr has photographed his Ganzfelds, Perceptual Cells and Skyspaces all over the world. So the Gallery offered Holzherr the chance to travel to a city that he’d never visited to photograph a Turrell he’d never seen. In a world where flying from one hemisphere to another was still an exciting reality (and not a longed-for fantasy), Holzherr readily accepted the Gallery’s invitation. Once Holzherr’s commission was confirmed, planning for the book, and Florian’s visit, started in earnest.

There were flights, accommodation and a contract to organise, writers to commission and winter weather forecasts to consult — there was a very low chance of rain in Brisbane in July, but we crossed our fingers until the shoot was over in any case. The project team met to discuss vantage points and shot lists, and how Night Life could be represented most effectively by different views and colour sequences. Graphic Designer, Sarah Newport started working on design concepts, as well as specifications and finishes for the special editions, while she also grappled with the best way to approach the printing process in order to accurately represent Night Life’s almost fluorescent hues. Philanthropy Manager, Dominique Jones began contacting potential donors to help the Gallery fund the ambitious vision for the book.

Head of Facilities, Steve Gibson worked with other Cultural Centre staff to ensure that the grounds around GOMA were presentable for the three-days of Holzherr’s visit — that banners and bollards were removed, ground lighting was turned off, and garden renovations delayed. Design Manager, Michael O’Sullivan enlisted members of the installation team to assist with preparations inside GOMA — turning off lights, lowering window blinds, dimming exhibition signage — anything that might enhance the aesthetics of the building for the night-time shoot.

The Events team was consulted to ensure the shoot wouldn’t interfere with any scheduled events for the Gallery’s corporate clients, and vice versa, and Web Designers Clinton Wong and Thomas Renn volunteered as ‘talent’. All these preparations would eventually help Holzherr to make the most of his limited time in Brisbane. Then, in late July 2019, a small number of Gallery staff accompanied Holzherr on his three-night shoot, acting as gofers, ‘talent’, extra sets of hands to carry camera equipment, and interested observers.

As you can see in the beautiful hardcover publication, Holzherr’s visit was a wonderful success. The photographs are simply outstanding — and he took so many shots from so many different vantage points that there were probably enough images to fill a dozen books!

Holzherr’s approach was professional and good-humoured. He was friendly and genuine, laid back, but committed, and nothing was too much trouble — even when we suggested making our way across to the other side of the river to set up his camera on the bicentennial bikeway (under the M3 motorway) to capture GOMA with Night Life-coloured shimmering water in the foreground. He also generously opened up his archive of Turrell images for the project, which enhanced the publication immeasurably.

In July 2020, on the eve of the second anniversary of Night Life’s launch, travelling is difficult, while travelling overseas is nigh on impossible, so Brisbane audiences are very fortunate to have a Turrell in their own backyard. For those audiences not so close, enjoying the pages of James Turrell: Night Life, featuring Florian Holzherr’s stunning photography, is the next best way to be inspired by Turrell’s latest creation. And we can only hope that some of these readers will be inspired enough to plan a visit to GOMA to see the work’s splendour for themselves — at some stage in a freer post-COVID future.

The Gallery is extremely grateful to Liz Pidgeon and Graeme Wikman for their generous support of the publication James Turrell: Night Life.

Night Life 2018 was realised with the generous support from the Queensland Government; Paul, Sue and Kate Taylor; the Neilson Foundation and the Queensland Art Gallery | Gallery of Modern Art Foundation Appeal. 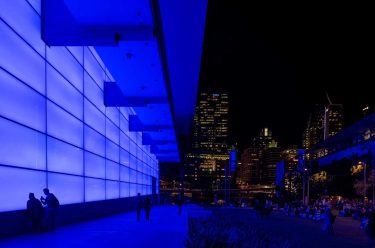