This portrait of Charles Blackman (1928-2018) by Jon Molvig (1923-70) alludes both to the friendship between Molvig and Blackman and to Blackman’s series of ‘Alice’ paintings in which he was immersed at the time — Blackman is depicted surrounded by flowers and accompanied by a white rabbit.

Molvig and Blackman established a short-lived art school near Burleigh Heads in 1959. Blackman agreed to travel to the school on weekends, while spending weekdays in his Brisbane studio. He once recalled being driven at a furious pace to and from the Gold Coast, perched precariously beside Molvig in a diminutive Goggomobil. The art school’s early demise was due to a grass fire that started accidentally during an outdoor painting class, and which had threatened to destroy the house and surrounding cane farms. 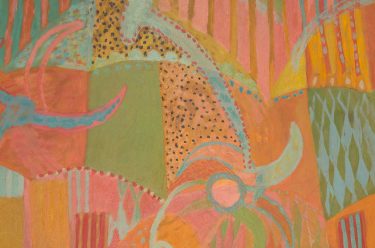