After resigning from journalism cadetship at the Sydney Sun, Charles Blackman hitchhiked to Brisbane in early 1948 for his first visit. He met the young artists of the Miya Studio, including Laurence Hope, Don Savage, and Laurence Collinson, and the closely affiliated group of Barjai writers, including Barrett Reid, and, most significantly, Barbara Patterson. Blackman’s association with young artists and writers profoundly influenced his personal and artistic development.

In February 1948 Blackman saw an exhibition of works by Sidney Nolan at the Moreton Galleries, inspired by Nolan’s time on Fraser Island. This particular exhibition revealed to Blackman the special power of painting to articulate a clear and focused vision. Blackman’s paintings from this period and his connection to the works of the Miya artists provides an integral link between the work of avant-garde artists and writers of 1940’s and 1950’s Brisbane with modernist counterparts in Sydney and Melbourne in the vital development of art and culture in Australia immediately after the World War II.

Blackman’s marriage to Barbara Patterson in 1951 ensured an ongoing connection to Brisbane, and in 1952, Charles and Barbara travelled north from Melbourne for the winter to make the first of several annual visits.

The simplification of forms in City lights 1952 reflects both the influence of Sidney Nolan’s work and the child-like graphic quality that was to become a significant aspect of Blackman’s imagery. This painting was completed at Barbara’s mother’s flat in Kelvin Grove. The work appears to have been painted from North Quay, directly opposite the present site of the Queensland Art Gallery, as we see in the distance a representation of the arched sections of Victoria Bridge, which was demolished in 1969.

With its companion work City lights,  Barnes Auto, Brisbane 1952 presents a contemporary picture of the city, and links Blackman and Brisbane with the avant-garde milieu of Heide in Melbourne, where artists similarly depicted local urban environments to evoke psychological tension and a sense of alienation.

Barnes Auto had a distinct profile in Brisbane: it was the only location in the city where petrol could be bought after hours. While Blackman’s use of insistent stripes in City lights reveals the influence of Sidney Nolan, stripes of the vehicle in the foreground of Barnes Auto, Brisbane have a connection with reality as, according to family sources, Barnes Auto had a striped livery on their vehicles. 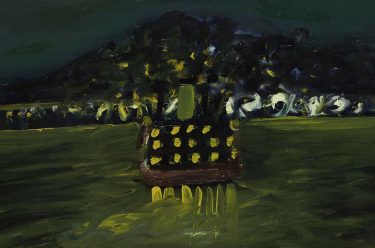