Charles Blackman while in Brisbane in early 1948 met the young artists of the Miya Studio, including Laurence Hope, Don Savage, and Laurence Collinson, and the closely affiliated group of Barjai writers, including Barrett Reid.

Barrett (known as Barrie) Reid (1926–95), librarian, poet and editor, had an important early connection with Queensland through Barjai magazine. Reid met the Melbourne art patrons John and Sunday Reed in 1942, and later Sidney Nolan, when they visited Brisbane. John Reed and Max Harris were the joint editors of the most radical literary journal of the time, Angry Penguins, and Reid became its youngest contributor. Reid and Barjai artist, Laurence Hope hitchhiked to Melbourne in 1946 to visit the Reeds and cemented a lifelong friendship in doing so. Through his friendship with Barrett Reid, Blackman met the Reeds at Heide and, through them, saw Nolan’s early St Kilda works.

With fellow students Barrett Reid and Cecel Knopke, Laurence Collinson established the Senior Tabloid of Brisbane State High School in 1943. In 1944, this student literary journal transitioned to the national, bi-monthly magazine Barjai, surviving until 1949. Collinson’s interests were artistic as well as literary, prompting the formation of the Miya Studio, which held its first exhibition (opened by critic Gertrude Langer) in the basement of the School of Arts in Stanley Street, South Brisbane, in December 1945. 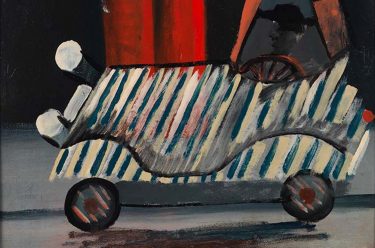