Church interior c.1941-42 is one of Grace Cossington Smith’s most significant achievements, incorporating her major stylistic approaches and interests. It is also meaningful in terms of the artist’s personal history, as it depicts the Smith family’s place of worship, the new St James’ Anglican Church in Turramurra, Sydney, built in 1941.

The painting encapsulates the artist’s concern with colour, embodying the pure, singing quality so often found in her work and the spiritual quality she found in the world around her. She wrote:

All form – landscape, interiors, still life, flowers, animals, people – have [sic] an inarticulate grace and beauty; painting to me is expressing this form in colour, colour vibrant with light – but containing this other, silent quality which is unconscious, and belongs to all things created.1 Grace Cossington Smith

Each stroke of colour the artist has laid down contains a rainbow of hues, the bristles used to apply the paint scraping through the layers to reveal myriad tones below. The colours create unexpected juxtapositions: combinations like the cadmium yellow and viridian green used to delineate the altar startle and delight, and help to create the painting’s striking effect. Significantly the pencil, which Cossington Smith has used for underdrawing and to outline elements of her composition, provides the only black in the work. The artist has employed her knowledge of colour theory to bring elements of her composition towards the picture plane. There is thus both an illusion of depth and a flattening of space. Speaking of this tendency, the artist said: ‘I just see a plane, and another beside it; I don’t want the distance’.2

The vibrant hues of the painting work in unison with the varied brushstrokes, which range from small, ordered stipples, through to long, generously applied strokes, to give the work its vitality. The stained glass windows are realised in jewel-like dabs, which form an abstracted yet recognisable image of the ascension of Christ,3 while the interlocking squares of paint in the upper right corner present a completely abstract pattern.4 These transitions echo the shifts that occurred in the artist’s oeuvre from her earliest canvases through to her mature work.

The aisle, which the artist has delineated in strokes of vivid blue, leads the viewer into the composition towards the central point of focus: the altar. The eye is then drawn upwards by the lancet windows and the vaulted, wooden beams, and down again along the multicoloured lines of the church’s stone archway to the congregation below. This energy and the obvious delight the artist found in reproducing the shapes of the man-made structure, recalls Cossington Smith’s earlier works of the Sydney Harbour Bridge. Despite this predominance of movement and colour there are moments of stillness and poignancy within the painting – the intimate connection established between the small boy in his Sunday best who glances up at his smartly dressed mother, for instance. This image is at once humorous and touching, perhaps a contemporary representation of the archetypal image of the Mother and Child.

We are at once a part of this scene, and isolated from it, just as the artist would have been when she conceived the work.5 We view the church as if we were part of the congregation and yet we see only the parishioners’ backs, a device that separates us from them. Despite this, the artist has invested each figure with personality through her choice of colour and brushstroke. We may compare, for example, a stylish woman in hat and coat with collar upturned, painted finely in brilliant green, with a parishioner whose more shapeless attire is defined in wide brown brushstrokes. These individuals stand in contrast to the faceless altar boys in the choir stalls, garbed in uniform white.

Church interior contains an oblique reference to World War 2 and thus has secular, as well as sacred, significance. Young men of enlistment age are entirely absent from the gathering but not, one imagines, from the thoughts of the mostly female worshippers. In this way Cossington Smith, a great patriot who was actively involved in the war effort, alludes to the impact of the conflict on the homefront.

In Church interior Cossington Smith has succeeded in creating a fine modernist statement that is an inspiring and uplifting vision of everyday life. 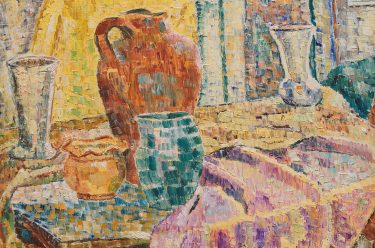