The first major survey of American icon Cindy Sherman’s photographs since 2000 is now on show at GOMA. The exhibition charts the artist’s ongoing commentary on social conditioning and her engagement with the construction of images and identity.

In a world awash with selfies and street fashion blogs, Cindy Sherman’s photographs suggest the artist’s prescience. Sherman is part of a generation who grew up with television overwhelmed with consumer product advertising. She came of age when the counter culture in the United States was in crisis, as the utopian ideals of the flower power generation withered with the 1967 race riots, the seemingly endless war in Vietnam, and President Nixon’s Watergate scandal. Translations of texts by French philosophers such as Michel Foucault, Roland Barthes and Julia Kristeva, who argued that identity was socially constructed, became widely available.1 As an artist, Sherman gained recognition in the 1970s as part of a group of artists called the Pictures Generation — who included Sherrie Levine, Louise Lawler, Jack Goldstein, Robert Longo, David Salle and Richard Prince — who took a critical approach to mass media by mining imagery from high and low culture for their artworks.

Throughout her illustrious career, Sherman has addressed the conditioning of white women’s roles in advanced capitalist societies, and the continuing popularity of her work is based on shared female experiences. Rather than assuming a position of superiority to the roles she plays, she enables audiences to identify with a make-up mishap or fashion faux pas. We don’t laugh at her characters but instead empathise with them through our own experience of falling victim to social conditioning. These works bring such follies to the fore, and the question of whether to resist that conditioning follows us beyond the gallery doors.

Since 2000, after using mannequins, dolls and props in her work for many years, Sherman has returned as the central model in her photographs. She is at pains to point out that these images are not self-portraits but portrayals of characters that we come into contact with in our daily lives and through the mass media. The artist’s carefully staged images — for which she sources the costumes, applies the makeup, and is the photographer — are profound critiques of contemporary identity.

Once hidden behind the powder-room door, the work involved in ‘being a woman’ is now regularly referenced in the media. In Sherman’s ‘head shots’ series, the effort of this labour is evident in the badly applied make-up, ill-fitting wigs and clothes that are slightly misaligned. Each work acknowledges the props and labour behind the ‘look’. In Untitled #400 2000, unblended white powder around the eye catches the light, the one-shoulder dress reveals a strip of untanned skin: the very items that were intended to help this hopeful beauty look more natural — her foundation, her tan — are revealed as props in a costume. These B-grade actress’s head shots do not depict future stars. Rather, they are images of women desiring the unattainable: to be younger than they are, and more interesting, more famous, or more elegant than they will ever be.

In Untitled #408 and #409 2002, Sherman inserts a glowing light source behind the characters, marking the artist’s first foray into a digital technology. In the ‘clown’ series of 2002–04, she further explores the possibilities of digital backgrounds to expand the mood that is hinted at in the character’s expression and stance. In some of the more elaborate backgrounds, it appears as if a gigantic day-glo lollipop is melting behind the character, drawing out the more sinister psychological elements of the clown. While the series may at first seem to be a major jump in the artist’s practice, when seen alongside works such as Untitled #359 2000 and #458 2007-08, the difference between thickly applied make-up on a middle-aged woman and clown make-up doesn’t seem so large after all.

In the ‘mural’ 2010 and ‘Chanel’ 2010–12 series, Sherman puts down her make-up brushes and starts digitally manipulating her facial features. In the same way that Sherman’s ‘head shots’ expose the delusion involved in the transformational power of make-up, works such as Untitled #512 2010– 11 and Untitled #549G 2010 reveal that the same hopes and vulnerabilities have simply been transferred to the realm of cosmetic surgery. In spite of all the nips and tucks, the fillers and implants, our desire to be something more than we are remains unfulfilled.

Using digital technologies has also allowed Sherman to incorporate multiple characters into a single photograph.2 It is quite an uncanny experience being in a gallery of works that each contain the artist, and this effect is dramatically heightened by works such as Untitled #425 2004 and #463 2007–08 in which the artist inhabits multiple characters within a single image. Shooting on digital film has also allowed Sherman to work at a scale previously unrealisable; her ‘mural’ series looms large over exhibition viewers at five metres tall. These daggy misfits in a housedress, a medieval costume and a juggler’s outfit — individuals who would normally be pushed to the far edges of a family portrait — are celebrated as the centrepiece of this exhibition in a 40-metre-long mural that wraps around a central atrium.

Cindy Sherman’s work is the result of the close observation of ordinary things and the day-to-day decisions making up our lives. By drawing attention to the choices we make — for instance, when putting together an outfit that we hope will express our chosen self — Sherman highlights the fact that we are constantly engaging in aesthetic and symbolic judgments. There are two series in the exhibition in which Sherman has collaborated with fashion houses Balenciaga and Chanel. In Untitled #463, from the ‘Balenciaga’ series 2007–08, a group of middle-aged women out ‘on the prowl’ wear stylised versions of the keffiyeh pattern. In the 1990s, this pattern became a symbol of resistance associated with the Palestinian cause; later popularised in cheap streetwear, and here it is transformed again by a luxury clothing brand. In these images, Sherman neatly observes that the endless transformation of symbols is a constant preoccupation for both the fashion designer and the artist.

In 2010–12, Sherman took up a long-standing invitation from Chanel to use their archive within her work. She created a series of photographs in which she donned vintage haute couture in stiff poses, set against the rugged, treeless landscapes of Iceland and Capri. The outfits are so fantastical they cannot be worn in this world; they necessitate the creation of a world specific to them. The lavish fabrics and handcrafted details of the garments contrast markedly with the background of harsh rocky outcrops and desolate plains, which are depicted in a faux-painterly finish, indicating a superficial luxury. Within the hermetic world view of fashion magazines, luxe dressing in exotic landscapes is a common trope. Within the white walls of the museum, however, the combination of these elements appears absurd, and the desire to escape into fantastical worlds comes sharply into focus.

Sherman’s ‘society portraits’ have a significantly different relationship to the gaze than her previous works: they no longer seek the viewer’s approval. Made for the sitter’s own gaze, these works reference a genre of portraiture that affirms a lavish lifestyle to oneself and to one’s guests. The ‘society portraits’ were made before the 2008 global financial crisis and, looking at them now, we are reminded of the hollowness upon which the luxury and wealth in these images was built. With few traces of youth left to charm an audience, these larger-than-life sitters stare down at the viewer with a domineering presence. The circulation stockings and pink sandal in Untitled #466 2008 signal a mix of practicality and folly, while the image of The Cloisters museum inserted into the background tries to suggest old-world sophistication. A loose thread on the sleeve of a heavily embellished kaftan suggests a life of luxury ‘coming apart at the seams’.

If the ‘society portraits’ present the height of the boom, then Sherman’s latest series reflects the bust. The feathers and sequins in Untitled #566, #567 and #568 2016 point to the excesses of the Roaring Twenties, the characters’ faces displaying the languor of Greta Garbo or Marlene Dietrich, perhaps alluding to the period following the stock market crash of 1929. Pre-Code Hollywood films of the late 1920s and early 1930s also presented women embracing the zeal of modern capitalism by using their brains and their sexuality to rise through the social classes.3 In Untitled #568, the skyscrapers of Manhattan surrounds the modern woman who, with hand on hip, is ready to take on the world. This work, with its touches of Hollywood cinema and background of the New York skyline, conjures up Sherman’s ‘Untitled Film Stills’ that launched the artist’s career in the late 1970s. While so much has changed in society and in the art world over the course of Cindy Sherman’s extensive career, her most recent body of work remains as astute as her first.

Endnotes
1  For an overview on the Pictures Generations see Douglas Eklund, ‘The Pictures Generation.’ In Heilbrunn Timeline of Art History, The Metropolitan Museum of Art, New York, 2000–, http://www.metmuseum.org/toah/hd/pcgn/hd_pcgn.htm, viewed 21 March 2016.
2  In the early stages of her career, Sherman also experimented with multiple characters by using collage, which can be seen in her series ‘a play of selves’ 1975 and ‘murder mystery people’ 1976.
3  See Baby Face 1933 (screenplay by Darryl F Zanuck, Gene Markey and Kathryn Scola, based on a story by Zanuck written under the pseudonym Mark Canfield); Red-Headed Woman 1932 (screenplay by Anita Loos, based on Katharine Brush’s book); and Beauty for Sale 1933 (screenplay by Eve Greene and Zelda Sears, based on Faith Baldwin’s novel). 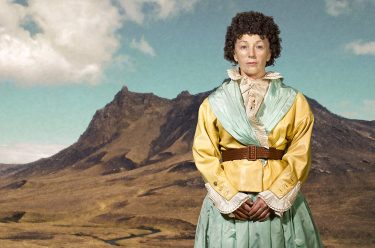