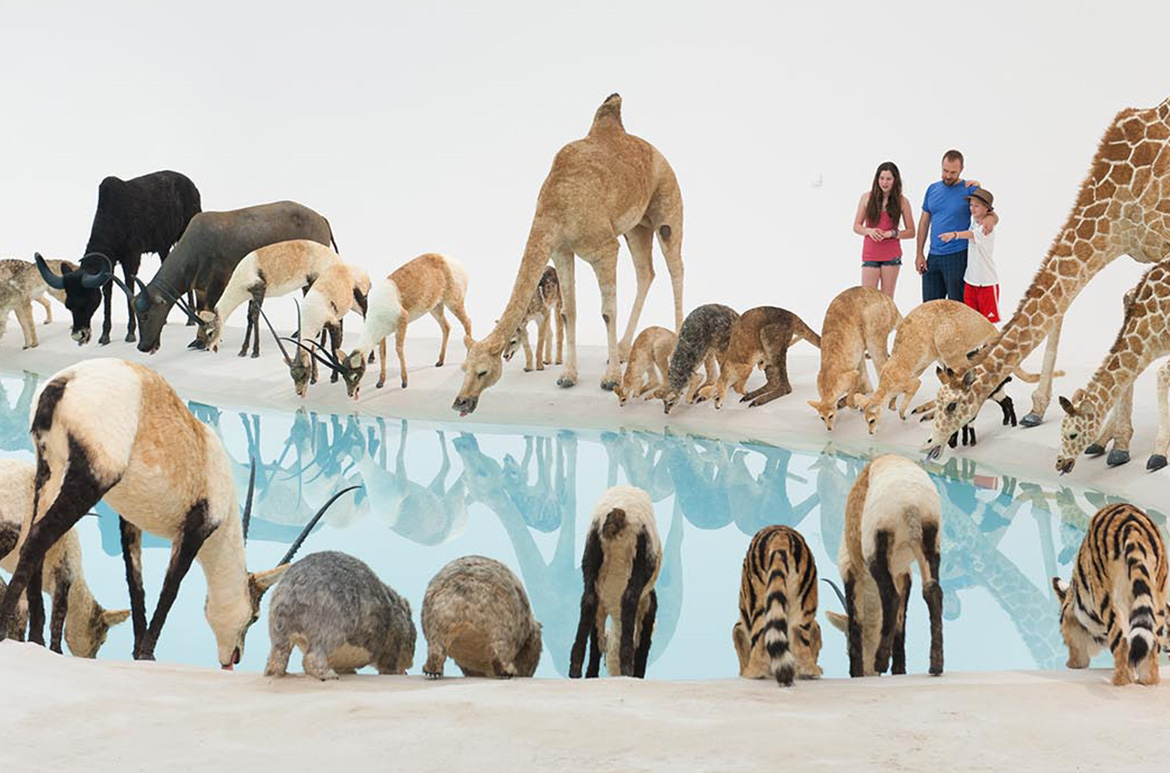 Over a period of six years from 2008, QAGOMA and New York-based Chinese artist Cai Guo- Qiang developed and realised the spectacular and meditative art installation Heritage 2013 — a beautiful, thought-provoking vision of our relationship with the earth and with each other. A highly collaborative undertaking, the artwork comprises 99 life-sized imitation animals from around the world congregating at a waterhole and covering 1104 m2 of floor space.

We look back at the origins of the work and delve into the commission and construction of this large-scale and technically complex installation.

Cai Guo-Qiang coordinated the placement of each animal at the edge of the waterhole for Heritage.

In 2008, the Gallery began discussions with Cai Guo-Qiang regarding a major commissioned installation. The concept was a work that would form a centrepiece for a major exhibition, as well as bringing a significant sculptural work by Cai into the Gallery’s collection. QAGOMA had previously worked with Cai for the 2nd and 3rd Asia Pacific Triennial of Contemporary Art exhibitions in 1996 (APT2) and 1999 (APT3), and had commissioned major gunpowder drawings for the collection, reflecting a long history of collaboration, strong relationships and trust between the Gallery and the artist.

By 2013, the work was realised — the pristine, utopic installation Heritage covered 1104 m2 of floor space, and composed of a range of life-sized imitation animals drinking from an enormous waterhole surrounded by white sand. Drips of water fall from the ceiling, creating a delicate ripple on the still water. The installation is viewed in the round via a boardwalk around the perimeter of the space and illumination was designed to achieve a daylight effect.

Heritage was conceived by the artist from inspiration gained during a research and site visit that he made to Queensland in 2011. Cai was accompanied on excursions to Stradbroke Island and Lamington National Park in south east Queensland to provide expertise in the natural flora and fauna of the region. Heritage was triggered by his visit to the pristine fresh water lakes on Stradbroke Island, particularly Bummeira (Brown Lake).

The artwork is a crafted balance between spectacle and physical experience, imbued with unique Queensland qualities and underpinned by a subtle conceptual experience. In notes taken during a meeting with Cai in 2012, the artist states that, the aim of the work is to present a strange but poetic space with a sense of the Australian identity, symbolising the country’s diversity of culture and heritage but also a sense of a mythical paradise, the land of OZ.

An example of Cai’s conceptualization is the very specific configuration that he developed for Heritage. Cai chose broadly familiar animals from all over the world, which comprise a variety of sizes, colours, and shapes, to create visual drama. The use of 99 animals is also significant, with 9 and 99 used repeatedly in Cai’s work. It represents an ‘incomplete’ rather than a round number, suggesting something more to come, as well as referencing Chinese numerology, in which the number nine is highly auspicious and means long-lasting. In all future presentations of Heritage, the artist indicated that smaller groupings of animals can be composed in multiples of nine.

Indigenous protocols were closely followed throughout the project, particularly given the focus of the exhibition on the land and Cai’s interest in the deep histories embedded within it.

The visit to Stradbroke Island included meetings with Quandamooka Elders and community representatives and a visit to the island’s indigenous cultural centre with the completed work a powerful presence and reflection on place and ecology.

The materials of manufacture were an important consideration from a conservation perspective. Cai has previously produced imitation animals made with straw cores, however and alternate core material was to be considered. Production of the imitation animals was outsourced by the Cai Studio to the Quanzhou Xinwen Craft Co. Ltd (Xinwen) factory in Fujian province, China. After considering the Gallery’s request for an alternative core material Cai and the fabricators agreed to use polystyrene. Prior to full-scale production, the factory produced two prototypes, a kangaroo and a panda.

The process included carving polystyrene foam into the desired shape and inserting steel wire into the limbs to provide strength across adhesive joins. The steel wire was left protruding from the underside of the paws and feet to be used later as a securing mechanism during display. The polystyrene was wrapped with cotton gauze fabric and covered in a PVA adhesive to provide a hard and ridged exterior. 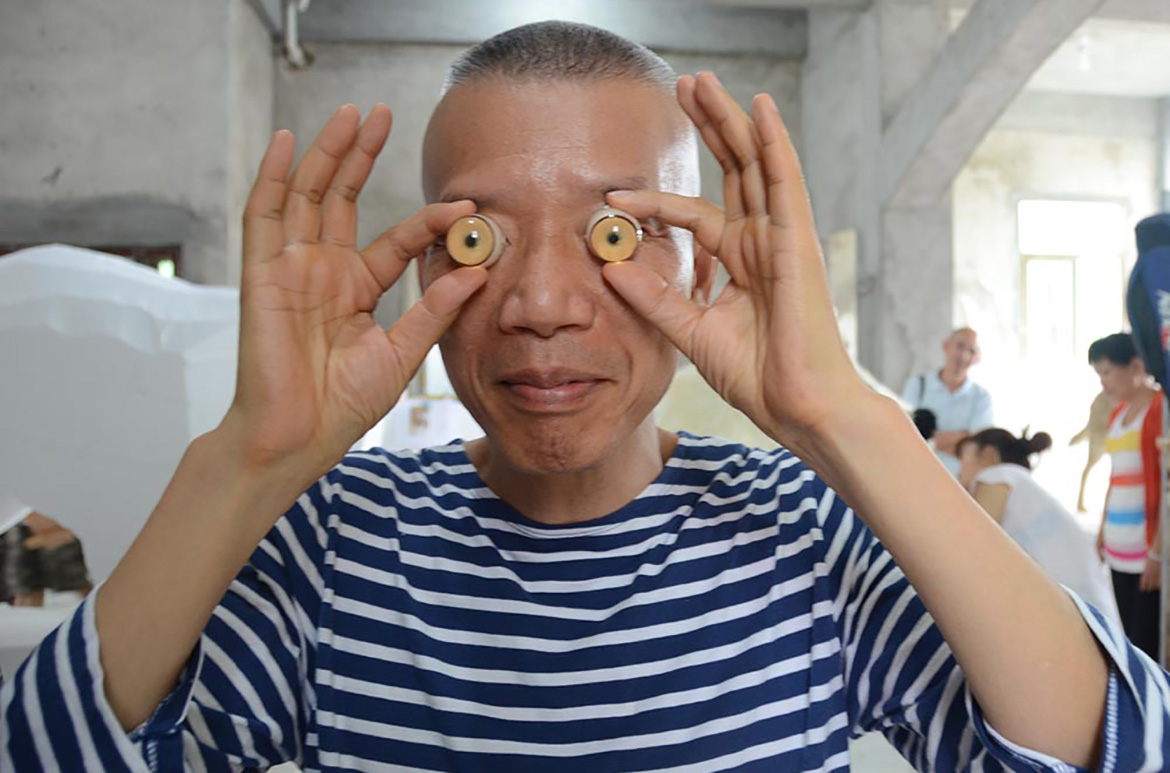 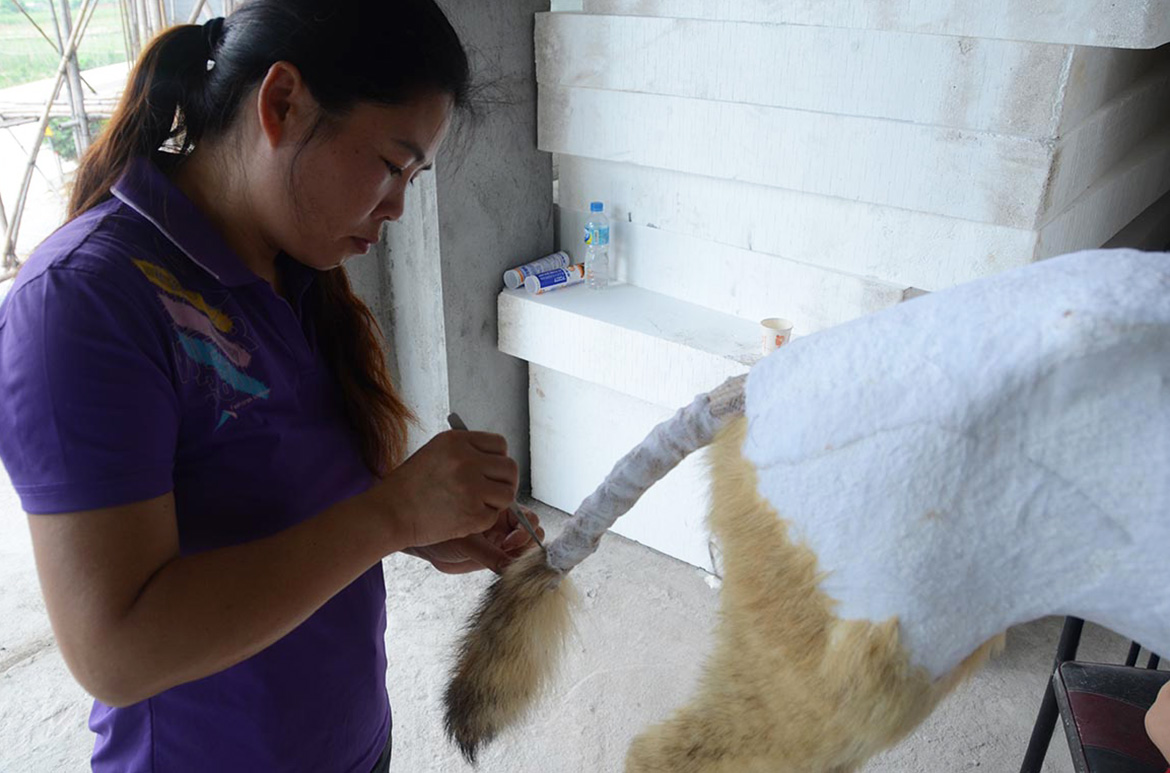 In the weeks just prior to commencing the installation process, Cai requested that the Gallery apply painted finishes to all the Heritage animals. The aim was to impart a life-like quality to imitation animals that, fresh from the factory, somewhat resembled large toys.

The Cai Studio provided a range of images of animals in their natural environment that displayed the effects that they hoped could be achieved, including wetness, muddy marks, soiling of fur, and trueto-life tongues. The preferred materials and methods included artists’ quality acrylic matt and gloss media and acrylic paint applied with brushes and by airbrushing. 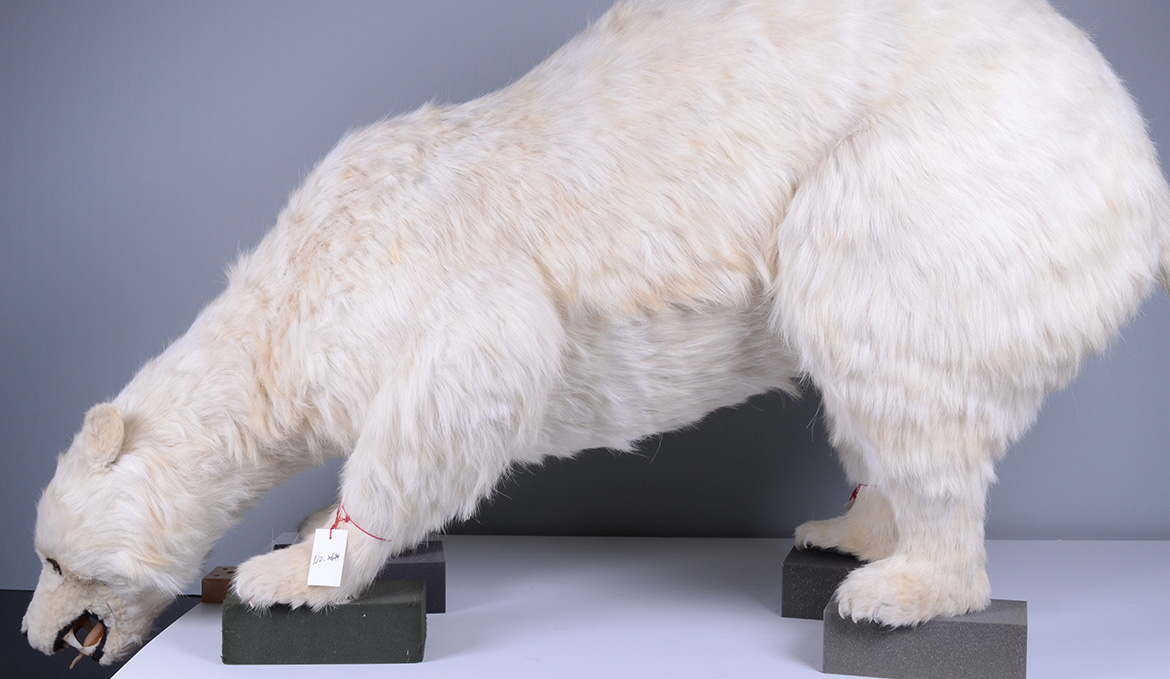 Lighting of the Heritage gallery space was designed to achieve a daylight effect requested by the artist. A total of 420 fluorescent lamps were fitted to the ceiling and covered with custom-made diffusers over which was stretched a high quality shade cloth that removed all ultraviolet light. Daylight-like illumination was integral to the experience of the artwork.

In preparation for installation, the imitation animals were transferred to the boardwalk around the perimeter of the gallery space. Cai coordinated the placement of each animal at the edge of the waterhole. The waterhole was necessarily constructed with an angled edge to provide the pool with sufficient depth.

Cai Guo-Qiang’s Heritage 2013 was commissioned in 2008. Six years later it opened to the public.