The watercolour The bark hut on the plain, Darling Downs, Qld., Mount Sturt from Glengallan c.1850s by Conrad Martens (1801–78) provides new insights and connections to the colonial history of Queensland’s Darling Downs.

In late 1851 the Sydney-based painter Martens arrived in Brisbane from Sydney via sea, and for the next few months travelled on horseback across the Great Dividing Range to the Darling Downs, moving south through New England to Sydney. En route he stayed with squatters and pastoralists, filling his sketchbooks with drawings of their houses and properties, his aim being to obtain commissions from property owners for watercolours that he would complete upon his return to Sydney.

Martens’s plan succeeded and he was eventually commissioned to paint over 70 watercolours, many of which are known today. Martens was the first professional artist to paint in Brisbane, and ‘his paintings are the earliest comprehensive visual records of the area’.1 His skill in acute observation had been developed between 1833–34 as a ship’s artist on HMS Beagle, captained by Robert FitzRoy, upon which he befriended Charles Darwin and recorded specimens, landscapes and climatic conditions in images of scientific precision.

The Gallery holds watercolours by Martens of many of the major stations taken up by squatters from the early 1840s on the Darling Downs, including ‘Coochin Run’, ‘Franklyn Vale’ and ‘Canning Downs’. Until now, the Gallery did not hold any views of the Glengallan property outside Warwick.

Although Martens occasionally painted in oil, his greatest skill was with watercolour and The bark hut on the plain, Darling Downs, Qld., Mount Sturt from Glengallan (illustrated) exhibits the artist’s great technical facility for rendering topographical features and a striking sense of scale and drama. The painting shows an old slab and bark shepherd’s or servant’s hut with a lone rider setting off in the foreground, conveying something of the hardship and the isolation of colonial settlers. The middle ground’s vastness evokes the artist’s extraordinary journey in the heat of a Queensland summer through the Downs, which had been home for thousands of years to various clans of the Wakka Wakka language speakers: the Keinjan, Giabal, Jarowair and Barunggam Aboriginal people, also known as the Gomaingguru, ‘men of the Condamine’, or Gooneburra, ‘fire blacks’ (from their habit of frequently firing the grasslands), who practiced a burning season to manage the grassy plains, which once resembled the prairies of North America and the steppes of Mongolia.2

These fertile grasslands brought great prosperity to the early squatters of the Downs, and the Glengallan property became famous for both merino sheep and shorthorn cattle. Some 15 years after Martens’s visit, an impressive two-storey homestead in the plantation style was built with stone quarried on the property in 1867 at a cost of £12 000. The grandest of the Darling Downs houses, the Glengallan Homestead (illustrated) featured a ballroom, specially commissioned furniture and a bathroom with the most modern amenities including running water pumped from the Condamine River.3 Furniture was supplied by the Brisbane cabinet maker Joshua Ebenston to complete the interior, including the commanding ‘Glengallan’ sideboard 1868 (illustrated) in the Gallery’s Collection.

The field drawings from which this remarkable watercolour is composed are unique records of the country only a decade after white settlers introduced cattle and sheep, and before changes to vegetation became obvious. Martens conveys the spare elegance and rich history of the great plains of the Darling Downs, and this work adds greatly to the Gallery’s important representation of colonial Queensland. 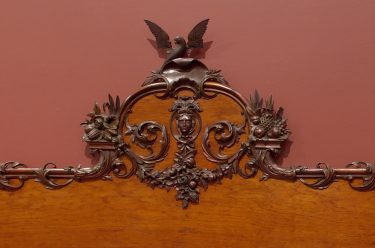 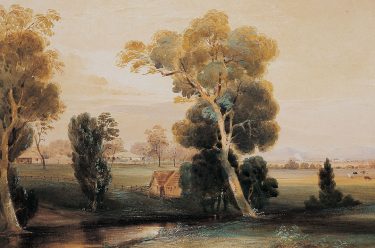