Bennett is well-known for his highly figurative narrative-driven commentaries on Australian colonial history and contemporary race relations. Number three, however, belongs to Bennett’s ‘Stripe’ series — a group of non-representational works made from 2003-2008 where the artist explored Western Abstractionism.

In 2014, the left panel of Number three was unlucky to sustain significant termite damage. The painting was housed in a secure, temperature controlled steel and concrete storage facility in Brisbane. The stealthy termites entered the building through a concrete flooring expansion joint on the hunt for food and penetrated through the painting’s fully enclosed bubble wrapping to feast on the wooden stretcher and any paint in their way. This tale proves that even when stored safely and securely, no artwork is immune to the threat of infestation. However this is also a tale of good luck, as it was through the care and vigilance of collection managers that this infestation was promptly discovered and the painting was able to be recovered.

The termites very efficiently ate their way through the painting’s timber stretcher and continued tunnelling right through the perimeter linen and paint. Damage to the stretcher, including collapsed stretcher members, had resulted in dimensional change and structural instability. Termites had also eaten holes in the painted linen canvas and left metres of resistant mud deposited on the front and back surfaces. All of these issues were complicated by the unique sensitivities of unvarnished modern acrylic paintings which can make them incompatible with more traditional conservation materials and techniques.

With the support of the artist’s partner, Leanne Bennett, the paintings conservation team took on the challenge of recovering the damaged work and returning it to a state where it could be exhibited beside its accompanying panel.

SIGN UP NOW: Be the first to know. SUBSCRIBE TO QAGOMA BLOG for all our behind-the-scenes features

Work began by removing deposited layers of termite mud that covered the entire length of the painting’s right side and thickly encrusted the holes visible from the front. A tailored cleaning solution was used to soften the mud which was then scraped away with fine surgical tools. Termite mud is an extremely durable material by nature – almost like cement. So given the extent of damage this was a painstaking task that took several weeks to complete.

Once the mud was removed from the paint surface, the perimeter of the work was faced with Japanese tissue. This protective layer was used to support the damaged edges and hold insecure areas of paint and canvas in position during treatment.

Next, the work was turned face down to continue cleaning on the back. Dried mud packed between the stretcher and canvas had fused the two supports together at the edges. Once they were carefully separated with palette knives and staples were removed, the damaged stretcher was lifted away.

Over time, wet termite mud trapped behind the work acted as a poultice, which distorted the canvas and caused corresponding areas of paint to appear mottled and irregular. Working from the back, gentle humidification and dry weights were used to slowly flatten these areas. This had to be done very gradually working in small sections as the application of too much moisture can lead to disastrous shrinkage in untensioned canvas.

When it came to filling voids and replacing areas of lost canvas, numerous experiments were conducted to trial a range of potential approaches. Invaluable to this process was a scaled mock-up of the damaged panel produced using original paints made available from Bennett’s studio.

Many of the canvas losses were quite large, up to 10cm2 in some areas. Conservators would normally fill these voids in two stages — first by replacing the missing canvas with a fabric insert, and then by applying a filling putty from the front to compensate for lost image layers. The latter step generally requires a certain amount of overfilling followed by levelling off, shaping and texturing to best match the original surface. Number three’s unvarnished acrylic surface was too sensitive for this more traditional approach. There were also many areas where the termites had eaten the cellulose-rich canvas but had left the paint layers intact. What remained were incredibly vulnerable fragments of original paint requiring reinforcement from behind.

Consequently, filling from the front was not a viable option. So the conservators developed an innovative ‘back-filling’ technique. Here, the facing tissue would act as a barrier creating a three-dimensional space in which filling material could be applied and levelled from the reverse. Losses in canvas and paint layers could be filled with a single application and a neat and level fill achieved without disturbing the sensitive surface on the front.

Back-filling had to be done before the painting was restretched, both to provide critical structure to the perimeter margins of the canvas and in order to access losses which would be subsequently blocked by the stretcher members. Many of the filling materials conservators would normally use are too brittle to withstand subsequent stretching so a more flexible material was required. This posed a significant challenge but after extensive testing, a suitable conservation-grade filling putty was developed using cellulose fibres and a synthetic co-polymer binder.

The back-fills were applied in small sections and dried under weight to limit shrinkage which provided the opportunity to impart fill texture through impression. A sample of original studio linen canvas supplied by Leanne Bennett that closely matched Number three was placed underneath the work during filling. Horizontal and vertical threads from the impression canvas and the original canvas were lined up as closely as possible for a seamless effect.

In preparation for restretching the painting, a strip-lining of fine polyester fabric was heat-set onto the perimeter margins of the canvas to support the fills and weakened edges of the work. With this approach the original canvas and artist inscriptions remain visible.

The painting’s original damaged stretcher was well beyond repair, but the conservators were lucky enough to source an unused stretcher of the same size from Bennett’s studio. This allowed consistency to be maintained across both diptych panels. With help from QAGOMA’s Conservation Framing Technician, the bottom member of the new stretcher was substituted with a custom-shaped replacement to allow for careful alignment of the distorted perimeter enabling original fold lines to be retained. This was crucial because the fold lines represented the limit of the painted image.

After restretching, areas of loss were inpainted to match the original surface as closely as possible. In this way, the damaged passages visually recede and the diptych can once again be viewed as the artist intended. All inpainting was done with dry pigments and a reversible water-soluble medium.

It took only two weeks for the termites to inflict their damage to Number three. Thankfully, the infestation was quickly detected and damage was confined to one panel only, illustrating the importance of vigilance and regular monitoring of artwork storage areas.

Following its conservation treatment, Number three was acquired as a gift of Leanne Bennett through the Queensland Art Gallery / Gallery of Modern Art Foundation 2020, donated through the Australian Government’s Cultural Gifts Program. You can see the diptych on display in ‘Unfinished Business: The Art of Gordon Bennett’.

‘Unfinished Business’ is at the Gallery of Modern Art (GOMA) until 21 March 2021. 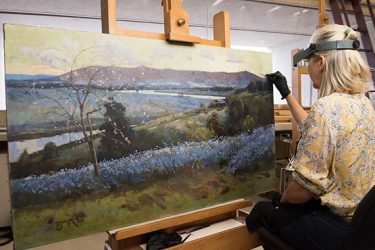