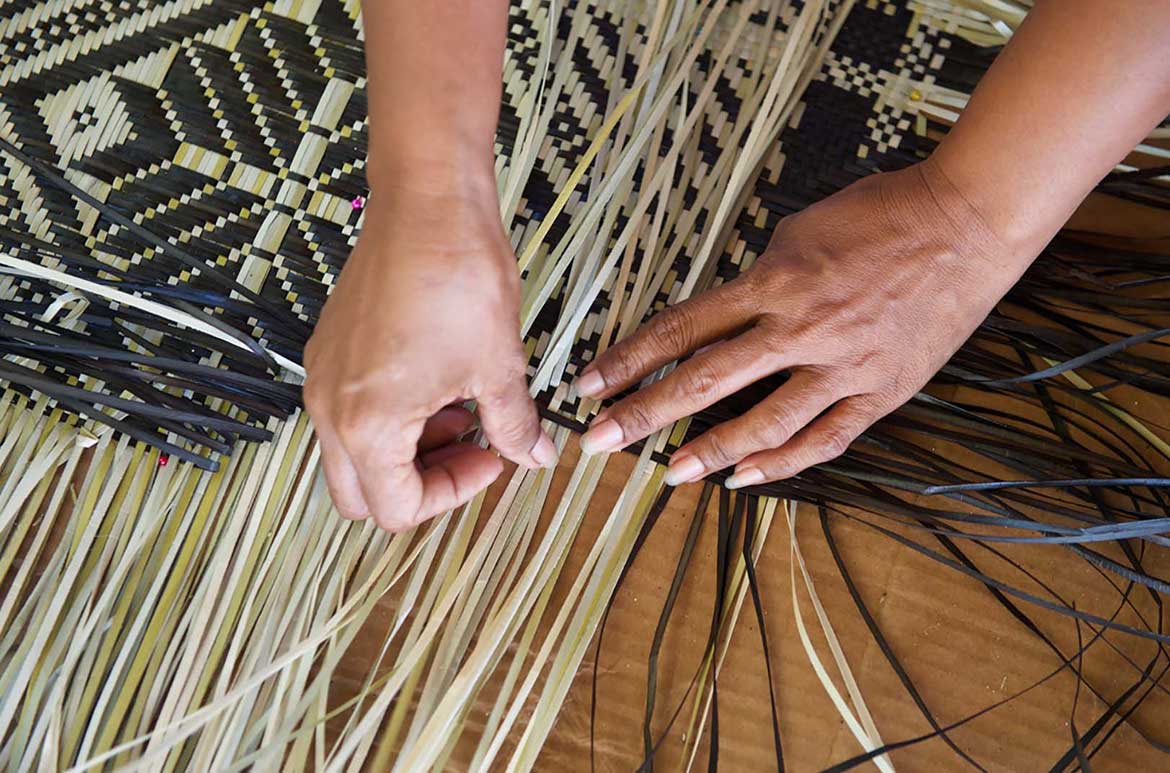 As part of their research for The 9th Asia Pacific Triennial of Contemporary Art‘ (APT9), QAGOMA curators have been building relationships with artists and curators in small and often remote communities across the region. In the second of a series of articles leading up to the Triennial, Ruth McDougall and Ruha Fifita visited the Pacific nations of Bougainville, the Solomon Islands, and the Marshall Islands.

Autonomous Region of Bougainville and the Solomon Islands

Following the Gallery’s engagement with Papua New Guinea in previous Asia Pacific Triennials, and through the exhibition ‘No.1 Neighbour: Art in Papua New Guinea 1966–2016’, there is an ongoing focus on contemporary art in the underrepresented Autonomous Region of Bougainville (AROB), the Shortland Islands, and the neighbouring island of Choiseul. The people of Bougainville maintain strong linguistic and cultural ties to communities on these islands, despite Bougainville being separated from the Solomon Islands chain by geopolitical boundaries dating back to the 1890s.1 A major project for APT9, titled Women’s Wealth, acknowledges these important relationships and the significance of women’s voices and creativity in these societies.2

Women’s Wealth was inspired by a shared dream to create opportunities for Bougainville women to engage in new creative conversations. A collaborative effort between the Gallery and three Buka women — cocurator Sana Balai, and artists Taloi and Marilyn Havini — the project was initiated via a research trip with Sana across Bougainville in April 2017. We were welcomed by the Hakö Women’s Collective, under the mentorship of Marilyn Havini in Sana’s village of Lontis on Buka Island. With guidance from the extended Havini family, Sana and I travelled south by road through stunningly beautiful landscapes, meeting people still struggling to rebuild their lives after the trauma of the 1990s war.3 By attending markets, visiting remote villages, talking to community leaders and spending time with women as they worked, we identified and gained the trust of a group of ten artists working across art forms. A month later we headed to Choiseul in the Solomon Islands and, with the assistance of the Choiseul Province Council of Women and contacts in Honiara, invited an additional four Solomon women to participate in the project.

The result was a ten-day creative workshop in September 2017 involving an intergenerational group of 19 artists from across AROB, the Solomon Islands and Australia. The workshop was supported by the Australian Government through the Australian Cultural Diplomacy Grants Program of the Department of Foreign Affairs and Trade, and QAGOMA’s Oceania Women’s Fund.

Held at the Nazareth Rehabilitation Centre, Chabai, on Bougainville Island, the workshop provided a physically and culturally safe space for the exchange of ideas, techniques, knowledge and skills. Through dialogues with Indigenous colleagues, the women explored the ways in which creative work can act as a platform to articulate individual and collective stories, histories and aspirations.4 These conversations, and the process of working and living together, built confidence and resulted in strong friendships, generating much excitement around the opportunity to present the women’s work on the APT9 stage.

Endnotes
1 Bougainville, the Shortland Islands, and the islands of Choiseul, Isabel and Ontong Java were proclaimed part of German New Guinea in 1886. Britain claimed the remainder of the Solomon Archipelago as a Protectorate in 1893. When another convention shifted the German/British border north in 1899, the Shortland Islands and Choiseul became part of the British Solomon Islands. Australia seized control of the North Solomons (Bougainville) in 1914, and after a concerted effort in the early 1970s towards self-determination, Bougainville became part of an independent Papua New Guinea in 1975.
2 Although a predominantly matrilineal culture, a small area around Buin in South Bougainville and some communities in Central Bougainville are patrilineal.
3 The Bougainville conflict erupted in Central Bougainville in 1988 over environmental concerns and the distribution of royalties associated with the highly profitable Panguna copper and gold mine, owned by Conzinc Rio Tinto. Thousands of civilians were caught in the conflict between the Bougainville Revolutionary Army (BRA) and the PNG Defence Force. The accompanying decade-long blockade resulted in more than 15 000 deaths, an almost total destruction of infrastructure, and a disruption to formal education affecting whole generations. A peace agreement was signed in 2001.
4 In addition to First Nation women from Bougainville and the Solomon Islands, the Australian group included Aboriginal artist Elisa Carmichael, Torres Strait ceramicist Janet Fieldhouse and Bougainville/Australian artist Taloi Havini.

Republic of the Marshall Islands

If there is one quality that the people of the Marshall Islands share, it is resilience. At many times in the nation’s history, its citizens have endured calamities often brought about by forces beyond their control. As the far-reaching implications of nuclear testing, militarism, rising sea levels, forced migration, and economic adaptation continue to threaten the idyllic shores of this expanse of coral atolls, the spirit of the land and its people has characterised a powerful voice in global discourses, not least through the work of its local artists. With the support of the Oceanic Women’s Fund, QAGOMA’s Asian and Pacific Art curatorial team undertook its first major Micronesian Project in September 2017. I travelled to the Marshall Islands to support the project and gain insight into the social and cultural realities of this unique place and people.

The Marshall Islands are home to one of Oceania’s finest weaving techniques. Referred to as jaki-ed or nieded, these mats made from pandanus fibres were originally used as clothing. The method of weaving a jaki-ed, carried out solely by women, conforms to sacred cultural principles. Intricate geometric borders distinguish each mat as expressions of the weaver’s ancestry and a manifestation of the belief that, in this matrilineal society, women possess unique creative attributes. The practice of jaki-ed weaving almost disappeared when trade cloth was introduced to the island, but disruptions in shipments during World War Two prompted its revival. In 2013, a new apprenticeship program supported weavers to learn the art form within the traditional dynamic of a weaving circle where women could exchange cultural values and knowledge. To ensure the practice survives, a growing number of weavers and community leaders are committing themselves to advancing the quality and social relevance of jaki-ed weaving, both locally and internationally.

The art of weaving has also been a source of inspiration for Marshallese spoken-word poet, Kathy Jetnil-Kijiner. In 2014, Kathy was chosen to address the UN Climate Change Summit in New York. Her carefully crafted and passionately delivered performance captured a personal perspective of a nation on the frontlines of the global battle against climate change. In partnership with the University of the South Pacific’s Majuro Campus, we coordinated a three-week weaving circle, which brought together Kathy and 13 expert jaki-ed weavers. The project enabled participants to exchange valuable knowledge and skills, collectively explore meaningful ideas, and create new works that will feature in APT9 and that highlight the resilience of this island nation.