Drawing together works from the Gallery’s contemporary collections, ‘Earth and Elsewhere’ features artists whose works frame the past and help shape our understanding of the delicate and often paradoxical synapses between memory and history, empathy and reception. The exhibition tracks a path across the planet’s surface and atmosphere, mapping an interpretation of the human condition through a series of poetic and philosophical associations. From fissures in memory, to structures of interpersonal relations, and the in-between spaces that have the capacity to transport us from here to elsewhere, the exhibition is presented in three interconnected constellations of works — ‘The cracked earth’, ‘Personal cosmologies’ and ‘Farewell to the sea’ — that begin on the ground before taking to the stars.

The exhibition was inspired by Patricio Guzmán’s poetic film essay Nostalgia de la luz (Nostalgia for the Light) 2010, which positions memory as central to understanding the human condition. Set in Chile’s Atacama Desert, the film features three interconnected searches into the past: astronomers study distant stars and solar systems located billions of years ago; archaeologists exhume and study carefully preserved human remains and artefacts; and a group of women search for Chile’s desaparecidos ― loved ones assassinated during Augusto Pinochet’s 17-year military dictatorship whose bodies are believed to have been scattered in the desert. Nostalgia de la luz unites these different attempts to connect with the past by balancing that which defines one’s personal experience of the world with the larger narrative of how and why we remember.

Like Guzmán’s film, ‘Earth and Elsewhere’ asks why we are drawn to, and grounded by, acts of remembrance. This question is connected to the creation and reception of art itself, conjoining the processes of retaining and reviving impressions of the past with the motivations for making physical that which cannot be reconciled by memory alone. Art becomes a site in which the experience of memory is given primacy, and to borrow Guzmán’s expression, embodied as a ‘fragile present moment’ when he ends Nostalgia de la luz with the suggestion: ‘Those who have a memory are able to live in the fragile present moment. Those who have none don’t live anywhere’.

‘The cracked earth’ brings together works that make symbolic connections between bodies and landforms, revealing the imprint of lived experience and the complexities of returning to a past which is now beyond our grasp. Some artists excavate individual and collective trauma by showing the earth broken and damaged, while others summon spectres from the past to make visible the gaps in social and political histories. The body’s material presence is given primacy in works that record its imprint and allegorise the fragility of land with the bodies that inhabit it. ‘Personal cosmologies’ examines the larger world of emotions constructed through personal exchange, confession and participation, with artists’ structures and archives recovering lost pasts or imagining repositories for individual and collective memories. Other works in this section encourage activities in the gallery space that make empathy the subject of art itself. ‘Farewell to the sea’ considers the vastness of the earth’s liminal spaces: the sea and the sky are recurring characters in the final section, as are metaphors for the dissolving of physical and psychic boundaries and the infinite possibilities offered by abstraction.

‘Earth and Elsewhere’ stresses the importance of the past ― indeed, that we have no future without the past ― and highlights our collective desires to seek objects and images that connect us with it. The exhibition queries what binds these questions of personal and social desire to bigger ideas about our place in history and the universe. From the experiences of trauma seen on the ground, the exhibition ends by looking outward, above and beyond, as an alternative means of understanding and reconciling our relationships with the past, present and future. For, as Guzmán urges, “the matter of our bodies is the matter of the stars. We belong to the Milky Way – that’s our home, not just the Earth.” 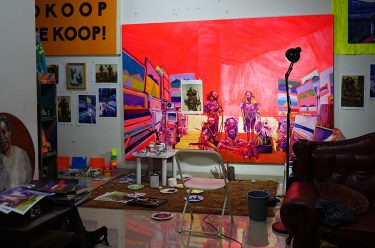 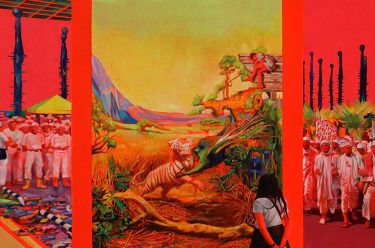