‘Embodied Knowledge: Queensland Contemporary Art’ opening at the Queensland Art Gallery from 13 August, is a showcase that reimagines our relationship to our bodies and to our increasingly digital world. Here, we survey a selection of artists whose work features in this vital new exhibition.

Profiling 19 talented artists and collectives, ‘Embodied Knowledge’ is a snapshot of the art being made today by artists connected to Queensland. The exhibition includes projects filled with wit and verve, that play with physical extensions, convey corporeal memories, and show the entanglement of the political within the personal. One striking aspect of the exhibition’s diverse offerings is their material complexity, especially in artworks by James Barth, Meuram Murray Island Dance Group, Ethel Murray, Obery Sambo, Vanghoua Anthony Vue and Justene Williams.

The extension of bodily limits within commercial and digital spaces is exuberantly explored in Justene Williams’s expansive installation and in James Barth’s photopaintings. In Barth’s Gleaming, I’m shown 2021 (illustrated), the anatomy of two lounging, plaid-clothed characters seems to mock skeletal norms. The legless figure sitting in the background is paper-thin, while the arms of a figure lying in the mid-ground appear as malleable as plasticine. To create her artworks, Barth first builds virtual worlds and avatars in open-source graphics software, then transfers these images to silk screens and prints them onto boards in varying shades of grey. The layers of wet paint are then brushed to create a blur — reminiscent of the work of German painter Gerhard Richter — that softens the crisp lines of the synthetic imagery. The resulting artworks are a remarkable combination of the virtual and the painterly.

Williams’s The Vertigoats 2021 (illustrated) humorously comments on the desire to ‘climb the ladder’ of both social and economic orders. A vivid array of mannequins — some immersed in the private world of virtual reality headsets — are posed across an expansive gallery wall. Williams stretches and distorts the mannequins’ fibreglass limbs so extensively that they almost lose their relationship to the human body. Lurid, metallic department-store shelving further adds to the vision of hyped-up retail therapy. Reinforcing the vertigo alluded to in the artwork’s title, colourful plastic climbing holds and geometric boulders are dotted across space, in reference to the current vogue of climbing gyms. Williams points to how the fashion and wellness industries advertise themselves as modes through which people can realise their individuality, but which actually engender conformity.

Vue draws his materials from hardware stores to reference the manual labour for which Hmong migrants are often employed in the Australian construction industry. While the intricate design of the artworks nods towards the opulent custom of Hmong headdresses found in the mountainous border regions of Vietnam, Thailand, Myanmar and Laos, Vue’s versions are far more physically imposing than their traditional counterparts, since they play up the sculptural elements of the found objects. As the Hmong people are split across national borders in South-East Asia and the wider diaspora, the question of cultural continuity remains pressing: through his ‘Devi(l)-(n)ation’ series, Vue honors the customs of his Hmong heritage, while also positing a way for these aesthetic traditions to transform and grow in an Australian context.

Also working with extensions of the body and the desire to sustain cultural heritage, Girramay artist Ethel Murray’s work reinvents the rainforest bigin (shield) (illustrated). Historically carved from softwood and painted with natural pigments, the artist employs lengths of orange, yellow, black and white synthetic rope. Expanding on her father’s totem designs, the graphic lines blur and the colours intermingle in Murray’s shaggy renditions. Although they are presented as static objects, the components of Bumbil Bigin Nguma: Remembering my father’s shields 2022 imply the exaggerated movements of the shields, swinging and swaying in ceremony or battle. With this simple twist in materials, Murray reanimates the bigin tradition to engage new audiences.

The Meuram Murray Island Dance Group (illustrated) encapsulates the idea of embodied knowledge in the activation of works through ceremonies that originate on Mer in the Torres Strait. Voice and movement bring the lessons of the ancestors and their totems into the contemporary moment. Obery Sambo (illustrated) is a leading member of the group and a respected mask-maker. In addition to producing customary dhari (the style of headdress that is the symbol of the Torres Strait), his practice has expanded to incorporate his own unique response to Mer legends and medicine men. These are rendered in commercially produced coconut husk, twine, synthetic materials and acrylic paint; and while they may not conform to traditional designs, Sambo uses them as memory props to keep these oral histories active.

These works and artists in ‘Embodied Knowledge’ each highlight how art can be deployed to rethink what cultural continuity can look like, and reimagine our relationship to ourselves in our increasingly digital world.

In conjunction with ‘Embodied Knowledge’, participating artist Callum McGrath has curated a free film program ‘In Queer Time‘ screening in the Australian Cinémathèque, GOMA from 12 to 24 August 2022. 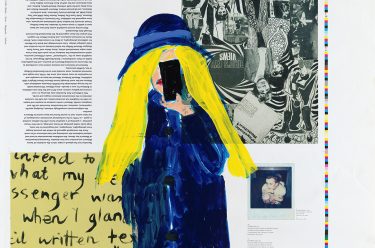