Leading Australian artist Tracey Moffatt will explore how we inhabit places and are inhabited by them in an exhibition of new and recent works at GOMA from 25 October 2014.

‘Tracey Moffatt: Spirited’ will feature works completed since the artist’s recent return to Australia from New York after 12 years.

This exhibition premieres Moffatt’s major new video work Art Calls 2014, in which the artist plays TV talk show host, and includes ‘Spirit landscapes’ 2013, a body of work that is comprised of five photographic series and a digital photoframe.

Throughout her career, Moffatt has retained an irrepressible connection to her origins and a deep interest in ideas of place and memory, all of which resonates and informs her latest body of work.

For this exhibition, Moffatt has selected thirteen works from the QAGOMA Collection by artists including Doreen Reid Nakamarra, William Robinson, John Pule, Ian Fairweather, Simryn Gill and Bridget Riley that in dialogue with her own work connect relationships with the landscape to the mind and spirit.

‘Spirited’ would include ‘As I lay back on my ancestral land’ 2013, ethereal, point-of-view landscape images superimposed with images of the artist’s body.

Another series, ‘Suburban Landscapes’ 2013, references Moffatt’s upbringing in inner-Brisbane and her personal memories of delicate beauty captured in mundane streetscapes.

In the series ‘Picturesque Cherbourg’ 2013, blooming flowers and white picket fences put a brave face on traumatic history, referring to the mission town to which Aboriginal people were transported from all over Queensland and New South Wales after being forced from their land in the early twentieth century.

The series ‘Pioneer Dreaming’ 2013 co-opts films stills of wide-eyed women gazing across prairies, referencing the romanticizing of the occupation of Native American land.

On Sunday 26 October from 11.30am visitors can join Tracey Moffatt for an in-conversation with Art Calls animators Julie Pitts and Miles Blow, and Simon Wright, Assistant Director, Learning and Public Engagement, QAGOMA. Then from 1.30pm Tracey Moffatt will present an in-conversation tour of the exhibition with Ellie Buttrose, Associate Curator, International Contemporary Art, QAGOMA. In conjunction with the exhibition and as selected by Moffatt, the Gallery will screen John Ford’s celebrated film The quiet man 1952 starring John Wayne and Maureen O’Hara at 2.30pm on Sunday 2 November and again at 1.00pm on Saturday 22 November at GOMA’s Australian Cinémathèque.

This project has been assisted by the Australian Government through the Australia Council for the Arts, its arts funding and advisory body. 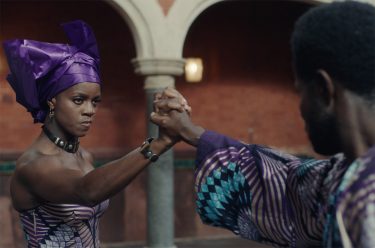