To truly appreciate the epic work that is TERRA SPIRITUS … with a darker shade of pale 1993–98, you must immerse yourself within the mediative space and absorb this expansive installation which reaches almost 40 metres in length.

This work has been described as Bea Maddock’s ‘Magnum Opus’1, indeed it is the accumulation of not only years of dedication producing the actual editioned suite of 5, but a career of refining her practice. The exhibition at GOMA in 2014 profiled those formative works and also the filming undertaken during the creation of TERRA SPIRITUS … with a darker shade of pale 1993–98.

This installation has the ability to transport you mentally to the rugged coastline of Tasmania, where you will find yourself enveloped by an ochre sea within a chorus of European and Indigenous voices as they recite place names of the panoramic shoreline. TERRA SPIRITUS … with a darker shade of pale 1993–98 charts the coastline of Tasmania as seen from the sea. The artist had originally intended to produce this work by surveying the coast from a boat and then circumnavigating the island, but this proved impractical so she devised a method of using pre-existing topographical maps.

“I quite like the idea of the work wrapping around you.
You see the whole thing at once which I think is important”
Bea Maddock

The success of this artwork operates on several layers both in terms of its technical expertise and the evocative nature of the ochre. You can admire it on both a micro and macro scale; admiring the exquisite detail of the finely incised coast line within the individual panels and then take in the massive vistas as you scan cliffs and bays around the gallery space. As Bea Maddock describes, the journey around the island is quest of personal understanding.

One of the most fascinating aspects in my role as paper conservator is gaining an intimate understanding of the physical nature and creation of art held within our Collection. I had the privilege to spend time condition reporting this installation in preparation for its display. Condition reporting involves close scrutiny of the tactile surface. I was mesmerized by her technique which involved painstaking methods using a combination of incised lines, meticulously cut stencils and blind letterpress.

She is the “quintessential maker” where she experiments and pushes the medium to make eloquent statements. I was fascinated by the comprehensive text which accompanies the production of this suite. The creation of this installation was an enormous undertaking starting from 1993 until 1999.

It is enthralling to read about her creative practice and gain greater insight into her working methods; to comprehend the numerous decisions made and exactly how her concepts evolved. She undertook the collection, grinding and grading of the ochre and carefully created tonal variations for the coastline.

This book ‘TERRA SPIRITUS with a darker shade of pale, Bea Maddock’s Materials & Studio Practice’ was a collaborative initiative between artist, curators and conservators at the Queen Victoria Museum and Art Gallery, Launceston and tells a compelling journey of how this installation was devised.

We are able to display this work as a continuous frieze, where each panel is butt up against the next. The individual drawings of ochre have been treated with 4 layers of fixative, so although they have retained a velvety texture the pigment is well bound to the surface. The mounting system for our suite was devised in 1999.

This consists of mount board backing which has 2 rows of Velcro strips adhered to the back for each panel. On the back of the individual artwork panels were pasted Japanese tissue hinges along both the top and lower edges. These hinges were wrapped around the edges of the smaller mount board backing and secured in place. Each panel was mounted onto the corresponding hook side Velcro which were stapled to the gallery walls.

“so it must be hung without any visible means of support”
Bea Maddock, Terra Spiritus …with a darker shade of pale: Bea Maddock’s materials and studio practice, 1999, p.56. 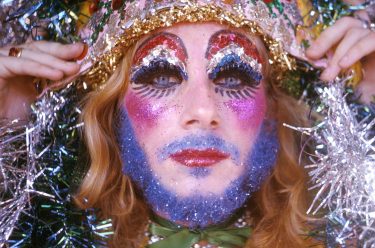