The 2016 Foundation Appeal has secured the striking self-portrait Bad dad 2013 by Queensland artist Michael Zavros for the Gallery’s Collection. Since launching in April 2016, 170 donations have been received in support of the Appeal with Foundation President Tim Fairfax AC delighted with the generosity of benefactors who ensured the success of the campaign.

The Appeal also attracted donations from other supporters, including a number of first-time donors to the Gallery. Director Chris Saines CNZM said it was the first time a work by a contemporary Queensland artist had been the sole focus of a Foundation Appeal, with the acquisition of Zavros’s intriguing painting strengthening the Gallery’s holdings of work by Zavros and the collection of contemporary Australian art.

Zavros has a long-standing relationship with QAGOMA and curated an exhibition of works from the Collection titled ‘A Private Collection: Artist’s Choice’ in 2013. In 2015, Bad dad was a highlight of the exhibition ‘GOMA Q: Contemporary Queensland Art’. The QAGOMA Foundation is the primary fundraising body of the Gallery. Since its establishment in 1979, the Foundation has raised more than $110 million, enabling the acquisition of more than 7200 artworks and supporting the development of exhibitions, publications and programs. 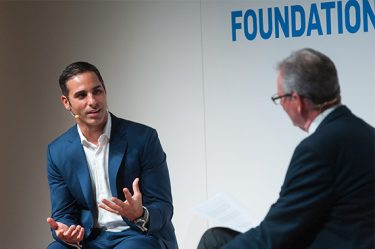