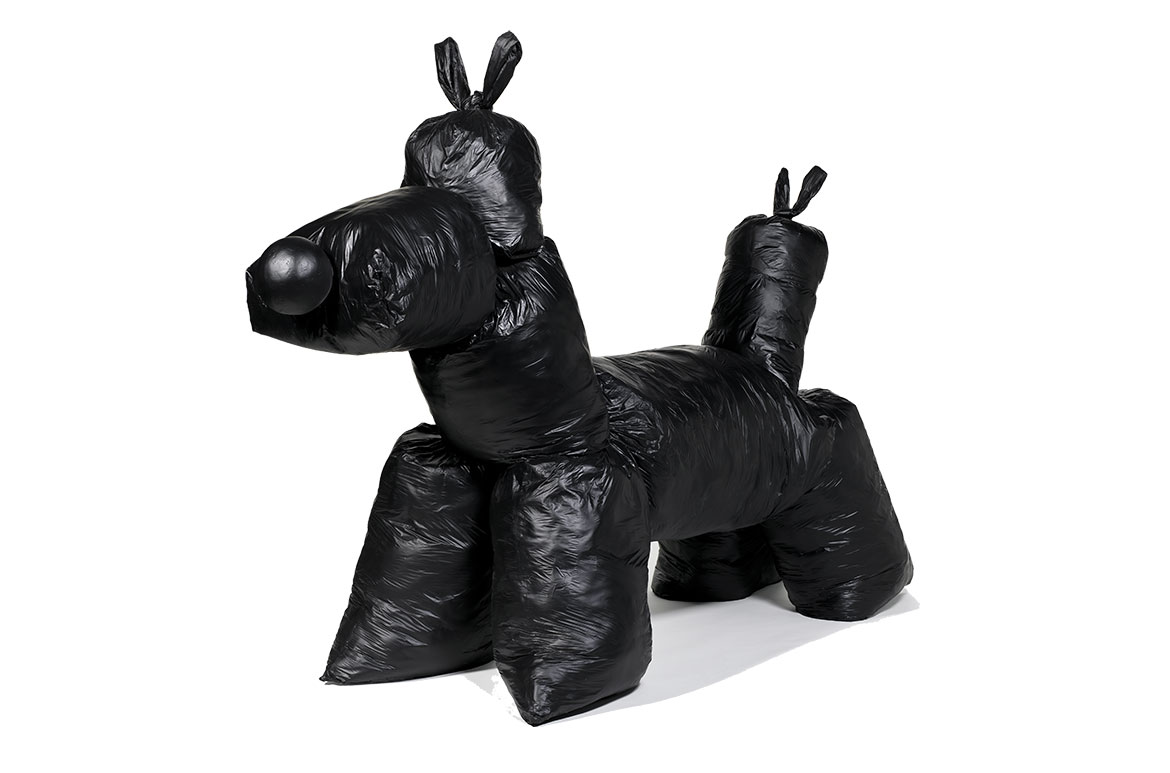 South Korean artist Gimhongsok’s Canine Construction 2009 brings me a lot of joy. This is one of Gimhongsok’s proposals for public monuments, recognising that no-one ever seems to agree on public art. It’s cast from resin but looks like it’s made out of garbage bags. Sure, there’s an art world in-joke here, looking like a shabby take on Jeff Koons’ balloon dogs, but there’s also something eminently likeable about the dog shape. When it first arrived, one of the staff unpacking it said they had to do everything in their power not to hug it.

The artist’s work is characterised by a deadpan humour, his references to art history and contemporary culture collide with political and ethical questions, visual gags, and sophisticated ruminations on artistic materials. This work is one of a series of sculptures typically composed of garbage bags, cardboard boxes and balloons and cast in expensive materials such as bronze or resin. The series stems from the artist’s long-held fascination with the foibles of public art and the difficulty of achieving consensus about objects placed in a public space.

Gimhongsok often refers to major works by prominent international artists in his own creations. Canine Construction mimics the sleek, colourful balloon-dog sculptures of Jeff Koons. However, the peppy stance, aerodynamic curves and anodised hues of the latter are replaced with doughy, slumping garbage bags, an unwieldy mass of flat, uninspiring black. Haphazard binding compresses the rearmost bag into a tail, while an easy-carry tie atop the head furnishes the dog with a quirky pair of ears.

That Canine Construction might be read as a poor man’s Koons suggests that questions of artistic originality have been subsumed under the broader category of value, of what provides a work of art with its venerated status. On the other hand, this resin cast of a garbage bag remains a copy, and it is in this that new notions of authorship, creativity and value may be found.

For Gimhongsok, garbage offers the key to consensus precisely because it has been cast aside: freed from aesthetic proscription, he proposes that garbage is ‘a kind of collaborative project by the public’; embracing spontaneity and chance.

A strict reading of Canine Construction remains elusive, that, however, is part of the sculpture’s broader appeal: it is at once visually striking, instantly likeable and interpretatively open-ended.