GOMA will celebrate its tenth anniversary this year with exciting new artwork commissions and a program of major exhibitions commencing with ‘A World View: The Tim Fairfax Gift’.

Since the opening of GOMA in December 2006, the two-site Gallery has established a wide-reaching reputation as a dynamic artist-driven cultural institution. The building’s tenth anniversary was an opportunity to celebrate GOMA’s impact on the cultural landscape and look toward its future, with a suite of exhibitions, programs and commissions. Plans include a new public artwork commission by a Queensland Indigenous artist; a major free summer exhibition opening from 2 December, ‘Sugar Spin: you, me, art and everything’; and ‘A World View’, an exhibition honouring the far-reaching contribution of Tim Fairfax AC, one of the Gallery’s most generous supporters.

Since 2008, Tim Fairfax has kept QAGOMA at the forefront of contemporary international collection development, supporting the institution with the acquisition of more than 70 artworks from across the world, especially from Africa, South America, the Pacific and beyond. Artworks acquired for Queensland with Mr Fairfax’s support have ranged from vast installations to intimate sculptures all of which have enriched the experience of millions of local, regional, interstate and international visitors to the Gallery.

The second chapter of the exhibition opening at GOMA on 2 December will feature Tomás Saraceno’s Biospheres – a series of large-scale, suspended webs and Crossing 2016 a major new commission by leading international light artist Anthony McCall, secured for the QAGOMA Collection with Mr Fairfax’s support. Crossing 2016 reflects McCall’s many years developing ‘solid light sculptures’ in which white light is projected through dark, haze-filled spaces. This experiential work encourages visitors to step into shafts of intersecting light and be encompassed by the sounds of breaking waves. A selection of the artworks in ‘A World View’ will also tour regional Queensland for the first time in late 2017 and 2018.

‘Sugar Spin: you, me, art and everything’, opening from 2 December, will feature more than 200 contemporary works from the Collection, including many visitor favourites and new commissions. Across levels one and three of GOMA, ‘Sugar Spin’ will draw visitors in with distinctive chapters that celebrate and reconceive the complex connections between humanity and the natural world. 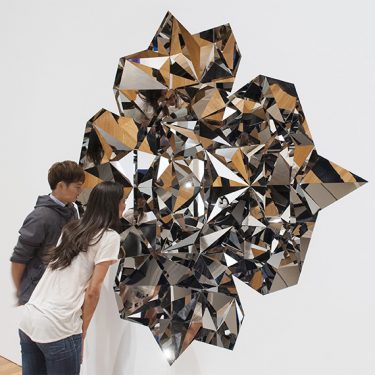