The Brisbane Times Good Food Guide 2016 award winners were announced this week, and the GOMA Restaurant topped its previous performance with a coveted two-hat rating – one of only four establishments in Brisbane to earn the Awards’ penultimate accolade. The only three-hat diner in town remains Esquire, whose chef Ryan Squire contributed his divine ketchup recipe to last year’s Gallery publication, Harvest: Art, Film + Food.

The icing on the cake came when the Gallery’s former executive chef Josue (Josh) Lopez was announced Chef of the Year. Praised for his use of native ingredients and local produce, Josh was also credited with ‘an insatiable desire to learn, razor-sharp focus and an instinctive grasp of technique’ and for ‘producing some of the most imaginative food in the state, always with a strong connection to place.’

The Queensland Art Gallery | Gallery of Modern Art (QAGOMA) operates its own restaurant, bistro and cafe using local seasonal produce to create menus inspired by the art on display. Enhance your visit with a dining experience at the GOMA Restaurant, GOMA Bistro or QAG Cafe.

Every purchase supports QAGOMA’s mission to provide visitors with a wide range of exhibitons, events and programs. Read more

All our dining outlets are currently cashless for the health and safety of our guests and employees. 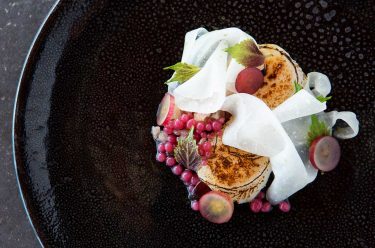