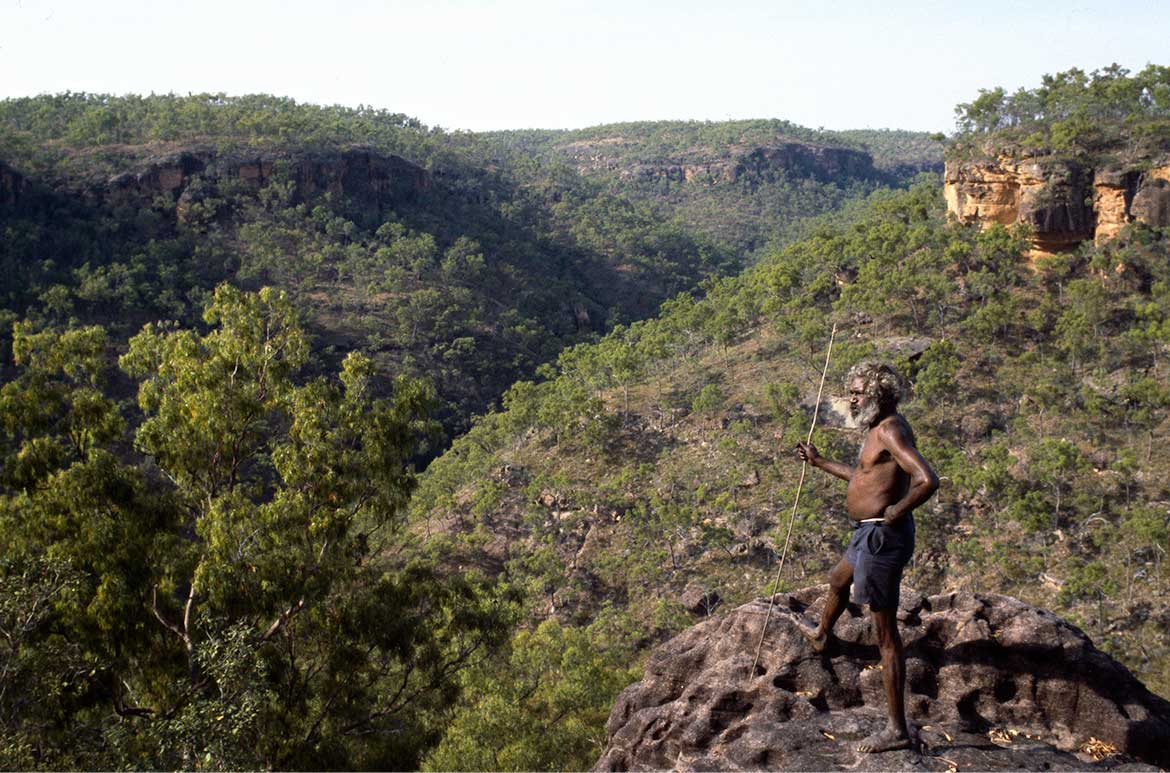 Goobalathaldin Dick Roughsey (1924–85) was born on Mornington Island before European missionaries and colonial squatter-settlers established a strong presence in the Gulf of Carpentaria. His mother, Kuthakin (later renamed Minnie), selected a small stretch of coast fringed with pandanus palms to give birth, a place known as Gara Gara (Karrakarra), near Goobirah Point (Kupare). He was born around September, when the pandanus tree was in full fruit, and the event is chronicled in Goobalathaldin’s Birth Day 1984, one of his largest and most important paintings, in which he is held aloft by a family member and presented to his kin and Country.

Traditionally, Lardil people took the name of their birth site, so Roughsey was called Gara Gara for the first few years of his life. The family lived a traditional lifestyle until Roughsey was around eight years old, when he was taken to the newly established Presbyterian mission. Although the mission was adjacent to the community, boys were only allowed to visit their families twice a week and on special occasions. Around this time, Roughsey was given the name ‘Dick’. His father’s names were Goobalathaldin (meaning ‘deep sea’) and Kiwarbija, which translates loosely as ‘rough seas’. The anglicised form, Roughsey, was given to the family as a surname.

Like many Aboriginal boys, Dick was educated at the mission until his early teenage years, before being sent out to work on cattle stations and later as a deckhand on a supply boat that transported goods from Thursday Island to towns and communities throughout the Gulf. Through these travels, Roughsey made friends and joined ceremony in Yirrkala in Arnhem Land. Importantly, this is also where he first observed artists working on bark paintings.

Apart from a number of isolated examples of bark paintings by Dick’s older brother Lindsay (Burrud), which he made for the anthropologist Norman Tindale in 1960, there was no established tradition on Mornington Island of painting on bark panels. The brothers set about creating their own unique style of painting, distinctive in its use of stark white backgrounds over which traditional Lardil stories are painted using silhouetted figures. Few trees in the southern Gulf were suitable for bark painting, so the artist and pilot Percy Trezise (1923–2005) — with whom Roughsey established a close friendship after the pair met in 1962 — would often cut the barks near his home in Cairns and deliver the panels to Karumba during his weekly DC3 flight service to the town.

Victorian-born Trezise became a pivotal artistic influence on Roughsey. Together they drew up a ten-year plan for Roughsey to become an artist; in the first five years he would paint in a ‘traditional’ style, focusing on his own Lardil stories, before beginning to paint in a Western style. This was likely the first time an Aboriginal person had devised a career plan to become an artist. Trezise helped Roughsey exhibit his work and introduced him to many of his art world contacts. In turn, Roughsey accompanied Trezise on trips through Cape York, acting as a guide and cultural intermediary in documenting numerous rock art galleries scattered throughout the escarpment, and talking to local traditional owners about their sacred stories.

Roughsey also spent time with Queensland artist Ray Crooke, whom he met when Crooke visited Mornington Island. Crooke helped Roughsey hone his oil painting techniques — which by the mid 1960s were taking on a touch of Paul Gauguin, reflecting Crooke’s influence — and these works were soon shown in a commercial exhibition in Canberra.

Roughsey’s figurative paintings continued to flourish and became popular throughout Queensland. His works often create a sense of including the viewer in the narrative, and this conscious framing conveys something of how Roughsey’s work and life was marked by generosity. Indeed, his paintings invite viewers to look closely and to learn more about Aboriginal traditions, cultural narratives and histories.

In the 1970s, Roughsey and Trezise began transferring this knowledge into children’s picture books, a format uniquely suited to Roughsey’s naive, narrative landscapes. His best-known book, The Rainbow Serpent, first published in 1975, is still in print today. For thousands of children and families, it has been an important first encounter with Indigenous Australian culture.

From his birth by a beach on a small island in one of Australia’s most isolated areas to his advocacy work in Canberra as the foundation chair of the Aboriginal Arts Board for the Australia Council for the Arts, Goobalathaldin Dick Roughsey was an important artist and cultural leader at a time of incredible change. ‘Stories of this Land’ recognises the life and work of this proud Lardil man, who took his people’s culture and stories to the world. 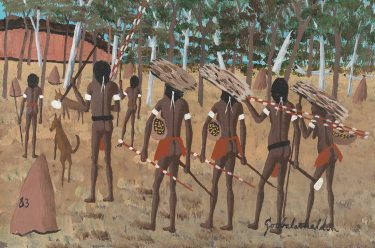 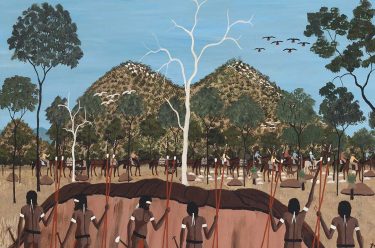