With great sadness, the Gallery acknowledges the passing of Gordon Bennett on 3 June 2014. Indisputably one of Australia’s most significant contemporary artists, Bennett made extraordinarily nuanced, clear and consistent contributions to discussions around race, identity, socialisation, colonialism, globalisation and citizenship in this country.

Gordon Bennett’s arrival on the Brisbane art scene is one I will never forget. I vividly recall his first show at Peter Bellas Gallery in Adelaide Street in 1989. It was one of the most insistently accomplished and coherent exhibitions you could imagine from such a young artist. It didn’t seem possible that he was so newly emerged from art school.

The Gallery acquired several works from that show but it is Triptych: Requiem, Of Grandeur, Empire that still stands as an enduring leitmotif of Gordon’s uncompromising but eloquent address to history. I knew his work best in the late 80s to mid-90s, when it featured in the ground-breaking exhibition ‘Balance 1990: views, visions, influences’ at the Queensland Art Gallery (QAG), and in the Art Gallery of New South Wales’s survey of contemporary Australian work ‘Perspecta’.  He won the prestigious Moet & Chandon Australian Art Fellowship in 1991 and was invited by renowned curator Fumio Nanjo to show in the Aperto section of the 46th Venice Biennale in 1995. The panels of Gordon Bennett’s ‘Triptych: Requiem, Of Grandeur, Empire’ are superimposed with Renaissance visual schema often used in Western art. Each panel features appropriated imagery to convey Bennett’s political stance. The left panel shown here is titled Requiem with a bitter irony — it depicts Truganini, historically described as ‘the last Tasmanian Aborigine’, and the figurehead for a supposedly dead race.

Although much of his work dealt with his Aboriginal heritage, Bennett refused to be categorised as an Indigenous artist. He resisted being included in Aboriginal art displays and instead maintained that he was a contemporary artist – his point being that all artists should be treated as equal, regardless of race or heritage. As he once explained:

I didn’t go to art college to graduate as an ‘Aboriginal Artist’. I did want to explore ‘Aboriginality’, however, and it is a subject of my work as much as are colonialism and the narratives and language that frame it, and the language that has consistently framed me. Acutely aware of the frame, I graduated as a straight honours student of ‘fine art’ to find myself positioned and contained by the language of primitivism as an ‘Urban Aboriginal Artist’.

For me, the conceptual architecture of Gordon’s work was built on an always thoughtful and intelligent address to history – be it that of his family, of the current condition of Indigenous Australia, or the collapse of these things into and through classical and western art history.

Gordon’s unexpected death comes at a time when his work is finding new audiences across the globe, most recently through the Berlin Biennale in 2014 and dOCUMENTA 13 in 2012. We take consolation in the knowledge that he was able to quietly enjoy this international respect and recognition from his peers and audiences — and that his bold, rigorous and honourable cultural influence will be felt for generations.

His work will continue to resonate and to gain even more importance as Indigenous and non-Indigenous Australians seek to find some form of reconciliation with their histories. Never more than now have we needed artists to speak truth to the power of that history. Australia and Australian art has lost an authoritative contributor to that dialogue. 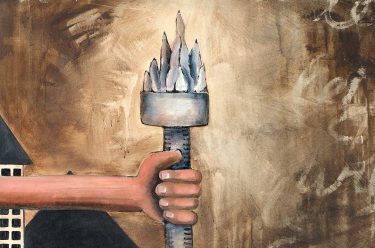