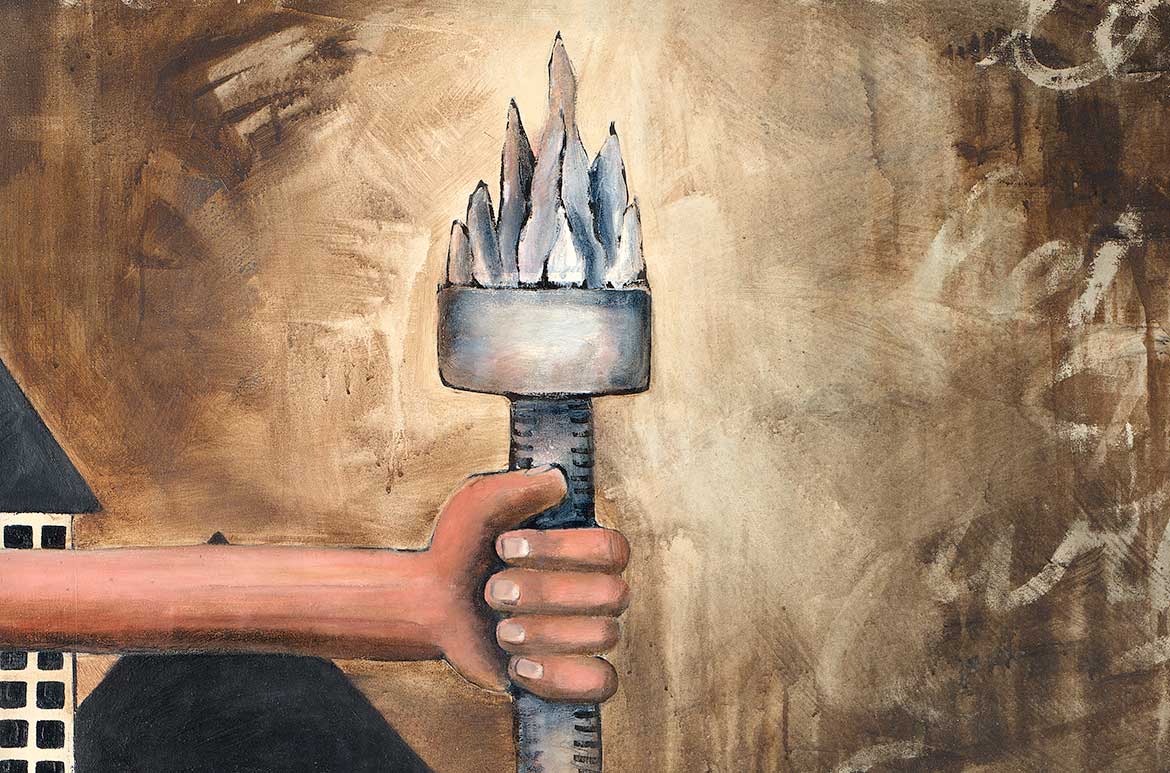 The Coming of the Light is a significant work by Gordon Bennett (1955–2014), one of Australia’s most influential contemporary artists. Bennett addresses Australian history as it has come to be represented and asks how it might accommodate new voices.

The writing is on the wall, portent is thick in the air. In a corner, the surface of a shaving mirror alludes to the artist’s emotional and conceptual range, in which he can reflect on wider anxieties held by a conga line of neighbourly others. Every member of this wide-eyed mob is neatly distanced from the choking black subject, protected by the white picket fence of urbanity; not in their backyard. Extending just beyond the fringe of the madding crowd is darkness awaiting enlightenment. Meanwhile, a liberty torch burning bright is held by a hand that gives and takes. It heralds a suffocating illumination. Caught in no-man’s land on a conveyor belt connoting progress, the grim figure, arms outstretched, pleads for freedom. On closer inspection, the mirror yields a corporeal abstraction of bloody expletives. He sees in himself words starting to emerge from a fog of gazing eyes — ‘abo, boong, coon, darkie’. We begin to wonder if that illumination could be the realisation that something as innocuous as child’s play, like English alphabet building blocks, might signify the formative elements and corrosive power of a language used against him from birth.

Laden with biblical, philosophical, art historical and postcolonial signifiers, the painting represents Gordon Bennett’s crisis of faith. While its title is an ironic reference to a term used in the Torres Strait Islands used to describe the arrival of the Christian missionaries deployed there in 1871, it also points back further to the Enlightenment period. Emissaries of the sixteenth- and seventeenth-century European intellectual movement were tasked with spreading modernity — to illuminate the darkness of the savage mind — which often doubled as a colonising force over homelands thought, for instance, to be terra nullius. Although the first, this would not be the only work by Bennett to consider the ways Western religion and civic power structures often associate light with God and goodness, and dark with evil, or the way that ‘primitive’ peoples have required ‘civilising’. The unifying thread of this work is Bennett’s referencing of New Zealand artist Colin McCahon: quoting a New Testament passage featured in McCahon’s ‘Elias’ series. The question repeated here — ‘will he come to save him?’ — remains unanswered.

This compelling work represents a pivotal moment in Bennett’s early career, where a readily identifiable and coherent visual language first comes into sharp relief, one he would continue to negotiate and expand on for the entirety of his career. It was painted in 1987 — the final year of Sir Joh Bjelke-Petersen’s reign as Premier of Queensland — during Bennett’s middle year at art college as a mature-age student and within sight of his graduation during the country’s bicentenary in 1988. By 1991, Bennett had won the Moët & Chandon Australian Art Fellowship, the country’s richest contemporary art prize, and his trajectory was clearly divergent from the norm. His immediate concern was to address how Australian history had come to be represented, and how it might accommodate new voices, acknowledging, along the way, the prior silencing of Indigenous subjectivity.

He wove into this project a questioning and critique of representation itself, right at a moment when major currents in global contemporary art were circling similar concerns. He held the work tightly for the next few decades, referencing it again several times in later series, and occasionally lending it for public exhibition. While recognising its early significance as a coda to interrogate ideas and values that oppress Indigenous peoples, their cultural and knowledge systems, he came to think of this painting as among the most significant he ever made:

Over the 15 years I spent in the workforce, and as I listened to the majority of my peers and workmates talk about the ‘abos’, ‘boongs’ and the ‘coons’, as Aborigines were usually referred to, I felt more and more alienated. On the surface I would sometimes smile . . . trying to fit in as best I could. The thought never crossed my mind that they might be wrong, or that I should, or even could, challenge these opinions . . . Neither had I thought to question the representation of Aborigines as the ‘quintessential primitive Other’ against which the ‘civilised’ collective ‘Self’ of my peers was measured. 1

Gordon Bennett decided to leave his job, take up formal studies in art, and with a voracious reading appetite, he investigated his shared Indigenous and European identity. His strategy of appropriation, where he could refer to previous artists and images of art historical significance to contextualise and reframe subjects anew, is revealed in this powerful early work, deployed with razor-sharp clarity and coherence, a harbinger of things to come.

Feature image detail: Gordon Bennett The Coming of the Light 1987

The Coming of the Light 1987 was gifted by Leanne and Caitlin Bennett to the Gallery’s Collection in memory of and admiration for Gordon Bennett. 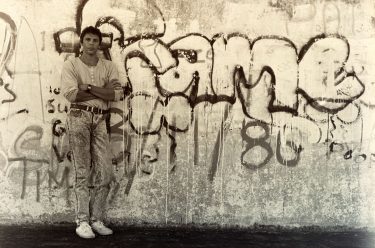