In the Cambodian capital of Phnom Penh this week, Cambodian artists who have participated in the Asia Pacific Triennial of Contemporary Art (APT) take centre stage in a landmark exhibition, acknowledging the role QAGOMA has played in supporting projects by Cambodian artists through its collecting and exhibition program.

Histories of the Future places some of Cambodia’s most prominent contemporary artists at the National Museum of Cambodia, the country’s primary art institution. It is the first time an exhibition of contemporary Cambodian artists has been staged at the museum, which holds some of the most important treasures of Cambodian culture including many of the masterpieces of the Angkor period.

Sponsored by the Australian Embassy in Phnom Penh, the exhibition celebrates the relationship between Australia and Cambodia, particularly the aid and support for the arts that Australian institutions and organisations have provided. This includes the restoration of the museum’s roof in the mid-1990s funded by the Australian government along with almost one million dollars raised through an Australian public appeal at the time.

From the National Museum’s press release:

The historical relationship between Australia and Cambodia serves as a backdrop for this exhibition which focuses on recent artworks acquired or commissioned by Australian institutions. The exchange between Cambodian artists and Australian galleries and festivals has been especially active and fruitful for more than a decade. Notably, the Queensland Art Gallery (Brisbane) has had a very active role in the research and representation of contemporary art from Cambodia for the Asia Pacific Triennial (APT), a well-respected art event for the region.

There are seventeen artworks in the exhibition from a variety of mediums, including video, photography, sculpture, prints and installations. Together, many of the works seek to resolve social, spiritual, cultural and economic tensions of the last decade as Cambodia has emerged from a century of conflicts. This close look at contemporary art highlights the importance of institutional cultivation of forms of intellectual, aesthetic and critical expression.

The exhibition includes works by Anida Yoeu Ali, Leang Seckon and Khvay Samnang, who recently participated in APT8, alongside artists featured in APT6 in 2009-10: Pich Sopheap, Rithy Panh, Svay Ken whose paintings are currently on display in QAG Gallery 6, and Vandy Rattana who is included in the current GOMA exhibition ‘Time of Others‘.

Histories of the Future was collaboratively organised by the Australian Embassy in Phnom Penh, curator Dana Langlois and Director of the Museum Mr Kong Vireak, all valued friends of the Gallery. The exhibition opens July 1 2016 with an opening address by Australian Ambassador to Cambodia HE Angela Corcoran in her first official function as Ambassador, and over the weekend will also include a lecture by Vuth Lyno, who recently presented a paper at the APT8 Conference. 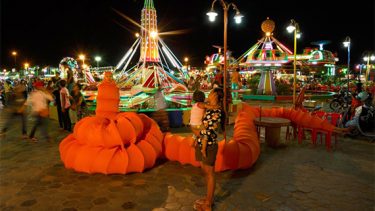