Marvel was so confident in the first Guardians of the Galaxy that a sequel was ordered before the original premiered. Despite being the least well known of the Cinematic Universe heroes to date, the motley band struck an instant chord with audiences, and James Gunn eagerly returned to direct the second outing for Peter Quill and his crew of galactic adventurers.

‘Marvel: Creating the Cinematic Universe’ screens Guardians of the Galaxy Vol.2 2017 during the last week of the exhibition, then view never-before-seen costumes and props.

‘The fate of the universe lies on your shoulders. Now, whatever you do, don’t push this button. Because that will set off the bomb immediately, and we’ll all be dead. Now repeat back what I just said.’
‘I am Groot.’

Quill, the self-styled Star-Lord, searches for his unknown father while keeping the team of Gamora, Drax, Rocket and Groot together. Kurt Russell joins the cast as Ego, Pom Klementieff signs on as the Mantis. Australian actor Elizabeth Debicki brings cosmic energy manipulator Ayesha from comics to the cinema screen for the first time.

Purchase tickets for ‘Marvel: Creating the Cinematic Universe‘ online at the ticket desk 10.00am-4.00pm daily, and until 8.00pm Wednesday. ‘Marvel’ film screenings and ‘Marvel’ Up Late are separate ticketed events. 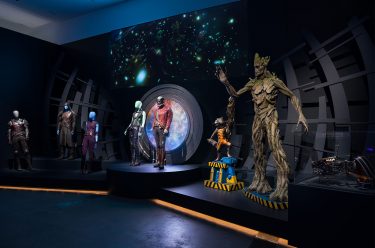