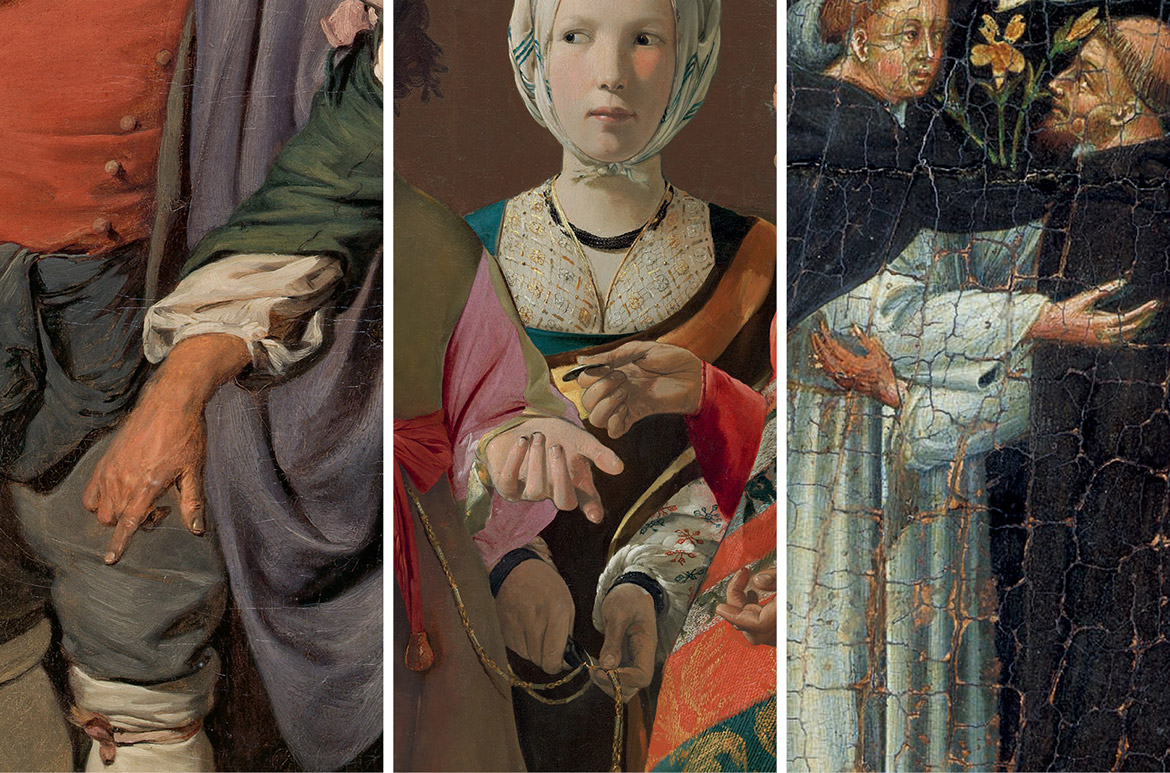 Looking at the many human figures in ‘European Masterpieces from The Metropolitan Museum of Art, New York’, it’s hard not to notice their hands: some elongated and others plump; palms pressed together in prayer or laid open in desperation; nimble, pick-pocketing hands; a wrinkled finger pointing in accusation; a clenched fist; dirty fingernails.

We are primed to notice the position of another person’s hands much as we read subtle facial expressions or fluctuating tones of voice. Gesture is a kind of language — one that is organised through a semantics and syntax more sophisticated than we might initially realise. We need only recall the famously mistranslated signs between cultures or the hand signals once used on Wall Street trading floors to see the complexity of non-verbal languages.

Hand gestures can also adopt new meanings over time. In Fra Angelico’s The Crucifixion, the Roman soldier Longinus brings his fingers together in the mano a borsa (purse hand). We might now associate this gesture with an expression of frustration or disbelief (perhaps thrown out by an impatient Tony Soprano). However, in Fra Angelico’s day, the sign communicated something quite different, that is, the soldier’s awe before the cross and his assertion that this was the one true Christ. By including this small detail, Fra Angelico synthesises the story of the Longinus’s spontaneous conversion into a single expression.

Many other artists in the exhibition use gesture to evoke speech in the silent medium of painting. Giovani di Paolo imagines saved souls warmly greeting each other in the garden of paradise, before being ushered on into heaven. As they embrace, touching each other warmly on the forearms or nestling their hands together, we can almost hear their welcomes: ‘Well how are you? It’s been too long’. Similarly, in Nicholas Poussin’s depiction of a miraculous healing, nearly every character is doing something with his hands. Unable to walk, the lame man reaches up to Saints Peter and John on the temple steps. The long-haired Saint Peter raises a pointed finger to cure the man of his ailment, while members of the crowd point and shrug with open hands in disbelief.

Almost exactly 100 years later, Jean-Baptiste Greuze tells a cautionary tale without the need for words. A servant girl wrings her hands in shame as her basket of eggs lies broken on the ground (many have read this to symbolise her lost virginity). Above, an elderly woman grabs the wrist of a portly man and furiously points to the young girl. In the righthand corner, a cowering Cupid tries to put the eggshells back together (on the wooden barrel we can just make out his bow and arrow, identifying the child as the god of romantic desire). We are lead around the scene by these eight expressive hands, as each guides us to clues within the cryptic image.

The art historian and critic Michael Fried claimed that a successful artwork mimicked human-to-human interaction, or gesture. For him, even abstract art was informed by ‘not gestures exactly, but the efficacy of gesture; like certain music and poetry, [artworks] are possessed by the knowledge of the human body and how, in innumerable ways and moods, it makes meaning.’1

In this way, gestures make a painting feel more real. The artists in ‘European Masterpieces’ paint hands with care as a way to bring the figures closer to us: drawing an equivalence between their bodies and our bodies. The characters are not just pointing, fidgeting, or flailing within the scene but, on some level, gesturing towards us. Although hundreds of years old, these figures seem to reach out to us with urgency, their messages just as direct as when they were first painted.

Hands that tell a story 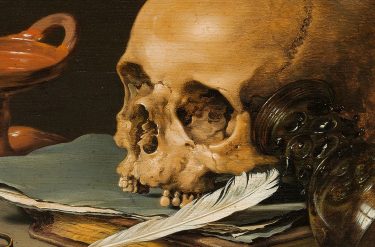