The Gallery’s edition of 36 lithographs by printmaker, amateur photographer and shadow play theatre designer Henri Riviere (1864–1951), combine the influence of Japanese art in Europe in the late nineteenth century with the impact of the Eiffel Tower on the city of Paris.

Following the introduction of ukiyo-e (‘pictures of the floating world’) woodblock prints to Paris in the 1860s, modern artists were drawn to their use of line, dramatic foreshortenings and unusual organisation of space, as well as to their subjects, which were often ordinary scenes from contemporary life. Far more than a pastiche of Hokusai, Riviere’s ‘views’ show the artist’s captivation, not only by the composition of ukiyo-e and the subdued palette of nineteenth-century manga (a term coined by Hokusai to describe his collections of sketches) but also by the monumentality of the Eiffel Tower’s wrought-iron architecture, which, visible from every quarter of the city, dominated the Paris skyline following its construction.

When you suddenly appear to us through a skylight, or presiding over a council of chimneys, it is not you that coveys the turbulent life of a big city, but Paris itself, which you merely accentuate. When you enter the reverie of a vagabond in a garden or along a deserted street, or you find your way into the meditations of artists and flâneurs, you are like a giant walking stick with which our mind draws figures in the sand, distractedly, or plays with fallen leaves.1

While acknowledging its new-found prominence in the lives of all Parisians, Alexandre, like many of his contemporaries, was in no way enamoured by the shadow the controversial tower cast over the French capital — 300 metres high (986 feet), it was the tallest man-made structure in the world. Originally proposed to stand for only 20 years, Gustave Eiffel designed the tower as a symbol of French industrial prowess. It was widely criticised at the time for ‘overshadowing’ the capital’s historic landmarks. For Riviere, however, who had been given access to climb and photograph the tower prior to its completion, the structure represented a completely new type of spatial and visual beauty. When viewed from within, with Paris far below, massive iron girders backlit by the sky created abstract patterns, similar in effect to the shadow plays Riviere designed for the Chat Noir (Black Cat) cabaret. When viewed from the ground, the tower became an omnipresent backdrop to daily life in Paris and an icon of modernity. 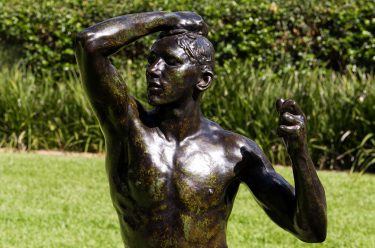