In the lead up to ‘The 8th Asia Pacific Triennial of Contemporary Art’ (APT8) we look back to a work acquired during APT7 by Parastou Forouhar and share insights into the artist’s inspirations.

Parastou Forouhar’s diverse artistic practice, which ranges across installation, photography and drawing, engages directly with her personal biography. Forouhar, who grew up in Iran, was the daughter of politically active parents in the period leading up to and including the Iranian revolution in 1979. Her emigration to Germany in 1991, followed by the politically motivated murder of her parents in 1998, altered her relationship to the country and language of her birth, from one of everyday intimacy to one of ambiguity. It is this space of ambiguity and its potential as a space for creation that Forouhar seeks to develop within her work.

‘Persian for beginners’ 1997, is a series of 15 calligraphic drawings Forouhar created as part of the German-based artist collective Fahrrad Halle. An important formative work in her oeuvre, it heralded her interest in the graceful eloquence of Persian calligraphy as not only a language of communication but also as an aesthetic discipline and space of exploration. In each of the drawings, Forouhar uses the calligraphic strokes and dots that make up the Farsi (Persian) word for a particular animal, to create the image of that animal.

Writing about this work, Forouhar likens the ambiguity around whether we are looking at an image or text to the feelings of affiliation and strangeness she felt when labelled as ‘the Iranian’ among her German colleagues. The visual elegance and simplicity of the drawings beautifully captures the act of trying to communicate in another language and across cultures, beginning with simple things and the importance of non-verbal and written modes of communication for carrying not only meaning, but feeling.

The art of calligraphy has a long history in Iran. Predominantly associated with the writing and communication of the holy text, the Qur’an, it has been explored as a space of aesthetic exploration for many centuries. Forouhar is interested in reclaiming calligraphy from its religious role by engaging with its visual eloquence and later traditions, such as zoomorphic calligraphy, which emerged in the fifteenth century, relatively late in the history of Islamic art, when religious taboos outlawing representation had lost some of their power. 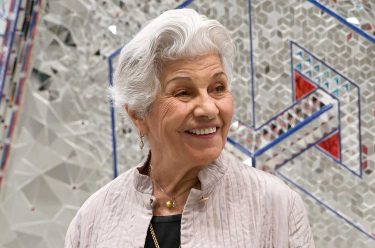