Sally Gabori is one of the most important Australian painters and Aboriginal artists currently working. Dibirdibi Country 2012, recently acquired for the Collection with the generous support of Cathryn Mittelheuser AM is among the best of her recent works. Here, we touch on some of the history behind the artist and her radiant painting.

Mirdidingkingathi Juwarnda Sally Gabori was born around 1924 on the south side of Bentinck Island, of the South Wellesley Island Group in the Gulf of Carpentaria. Her Kaiadilt language name, Mirdidingkingathi, means ‘born at Mirdidingki’, and Juwarnda is her totem, the dolphin. Bentinck, inhabited for thousands of years by the Kaiadilt, was officially ‘discovered’ in 1623 by Jan Carstensz, commander of the ship Pera, and it was also one of the first parts of the Gulf of Carpentaria surveyed in detail by the explorer Matthew Flinders in 1802. After Flinders’s brief encounter, the Kaiadilt had relatively little contact with the settler society over the following 145 years.

In the late 1940s, however, severe drought and high tides affected low-lying Bentinck Island and soon the entire population was moved to Mornington Island. As a minority in the Lardil community on Mornington Island, the Kaiadilt were often excluded or forgotten during the various painting and art movements that occurred there. Gabori’s tenacity and seniority established a space for the women of her tiny community to paint and gave them a voice through art.

Sally Gabori began painting as an octogenarian in 2005 at Mornington Island Art Centre. Her immediate love of paint — the full spectrum of colour offered to her — triggered an outpouring of energy; her confident paintings of country quickly gaining her the recognition of the art world. While her works were and still are largely seen as abstraction, they are highly idiosyncratic mind mapped landscapes, in which layers of understanding of her place are loosely transcribed. A closer look reveals how country, colour and the mind’s eye combine to impart an intimate sense of who Sally Gabori is and where she is from.

The focus of this work is Gabori’s favourite location, and the land, songs and narratives associated with Dibirdibi (the Rock Cod ancestor) that Gabori maintained along with her husband Dibirdibi (Pat Gabori), before moving to Mornington Island. Now a nonagenarian, Gabori’s paintings have gradually become more restrained. The Gallery’s earlier large-scale work by Gabori, Dibirdibi Country 2008, is a complex and vibrant painting; no less than six clashing and complementary colours intertwine to depict the rockwalled fish traps and sea country of Dibirdibi. Yet this work, painted just four years later, uses only two colours — a dark navy blue and white — to mark the physical, metaphysical and cultural landscape of the area’s saltpans. Gabori has stated, ‘This is the big saltpan on my husband’s country on Bentinck Island’.

Restraining her palette, Sally Gabori surrenders nothing of her energy and power. Her supreme knowledge, experiences, her sense of longing and loss, and her deep love of country all radiate from this incredibly beautiful painting. 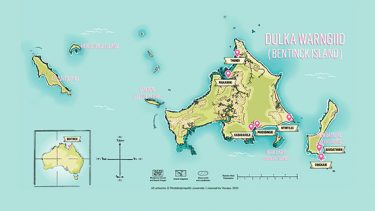